Karlie Kloss: ‘Shabbat has brought so much meaning into my life’ 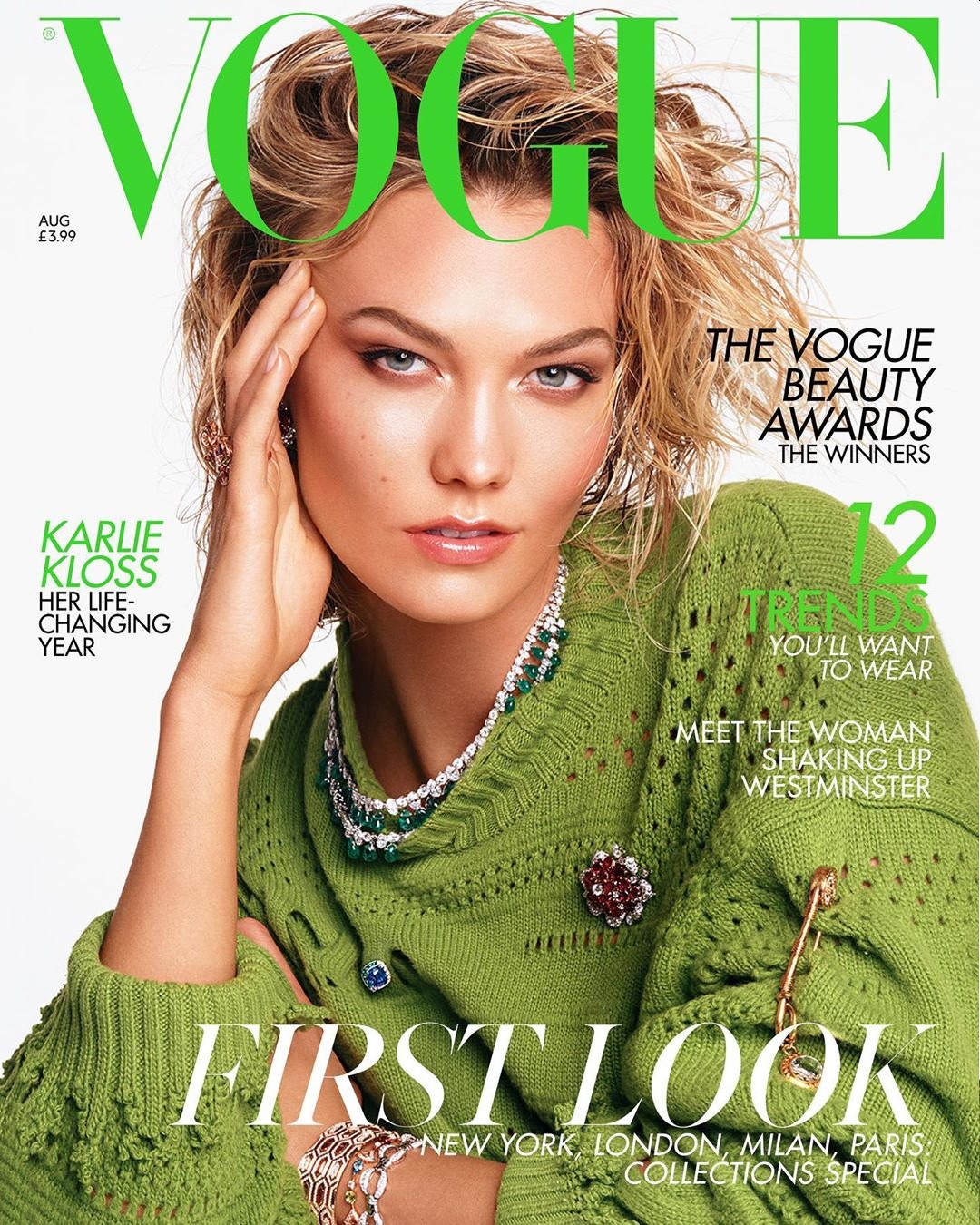 I’m lowkey obsessed with that tiny sapphire (?) and diamond brooch on Karlie Kloss’s sweater, honestly. Karlie covers the August issue of British Vogue. I appreciate that they used a model for the cover and I honestly don’t hate this, even if I think that Karlie’s face looks a tad too Instagram-filtered. Karlie is actually promoting her non-modeling ventures, like Kode With Karlie and Project Runway but mostly Karlie talks about her marriage to Joshua Kushner, converting to Judaism for him and how she’s not politically aligned with the Trumps. Some highlights:

Her work & philanthropy: “I am deeply ambitious and driven, and there are a lot of big things I want to do – big things. But I also want to enjoy the people I love and who love me. It’s important that I have joy in my life.”

Converting to Judaism: “Changing part of who you are for someone else can be seen as weak. But you know what? Actually, if you’ve been through what I’ve experienced, it requires you to be anything but weak. It requires me to be stronger and self-loving and resilient. I really did not take this lightly. It wasn’t enough to just love Josh and make this decision for him. This is my life and I am an independent, strong woman. It was only after many years of studying and talking with my family and friends and soul searching that I made the decision to fully embrace Judaism in my life and start planning for a future with the man I chose to marry.”

On adhering to Shabbat: “I think we all have a tendency to just keep going. Some people find grounding through meditation. Some find it through exercise. And to each their own, but for me, Shabbat has brought so much meaning into my life. It helps me reconnect to the actual world.”

Why she quit working for Victoria’s Secret in 2015. “The reason I decided to stop working with Victoria’s Secret was I didn’t feel it was an image that was truly reflective of who I am and the kind of message I want to send to young women around the world about what it means to be beautiful. I think that was a pivotal moment in me stepping into my power as a feminist, being able to make my own choices and my own narrative, whether through the companies I choose to work with, or through the image I put out to the world.”

She & Joshua are Democrats: “It’s been hard [to have the Trump association]. But I choose to focus on the values that I share with my husband, and those are the same liberal values that I was raised with and that have guided me throughout my life.”

Honestly, I find that her conversion is the most interesting thing about her. I want to know more about it! I want to know if she took lessons from a rabbi and I want to know if she eschews Christmas celebrations now and I want to know if she goes to temple every week. I’d much rather hear about that than anything else. Anyway, I believe her to a certain extent – I think BOTH Joshua and Jared Kushner would have refused to marry their blonde shiksas unless Karlie and Ivanka converted. Both women did. If I was crazy-in-love with someone awesome and he wanted me to convert to Judaism, I probably would do it too. But I wouldn’t do it for a Kushner. Gross.

49 Responses to “Karlie Kloss: ‘Shabbat has brought so much meaning into my life’”