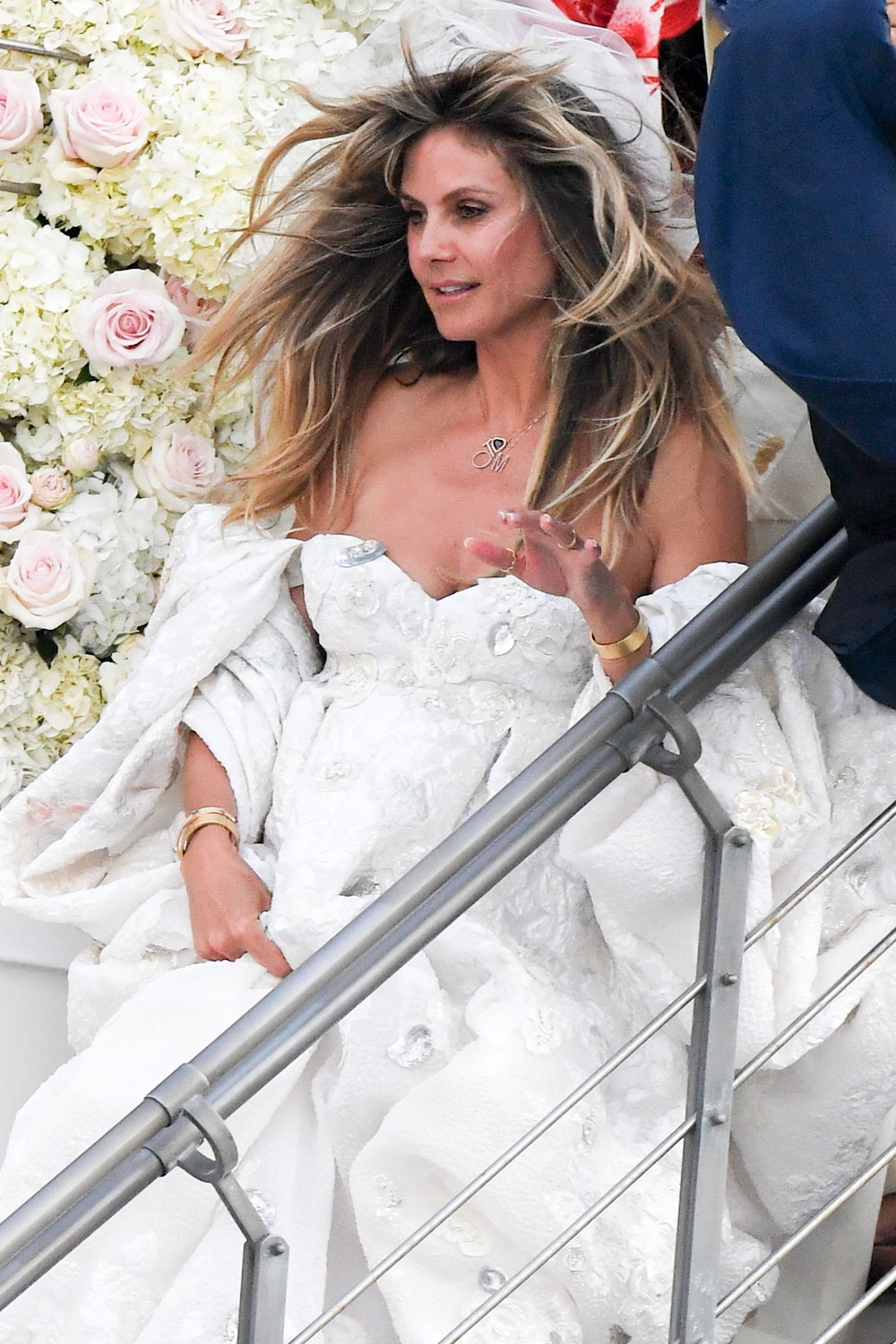 Above is a photo of Heidi Klum’s white strapless wedding gown which she wore in her second wedding to Tom Kaulitz on a yacht in Capri, Italy over the weekend. You can see more photos of the dress below and on People and E!. I haven’t found a designer ID yet, but it looks like it’s about to fall down, it has a built-in cape-like bunched up back, and is made with heavy-looking floral textured fabric embellished with floral sequins. It’s very on brand for her, I’ll say that, but she and Tom look elated and that’s nice. We heard last month that Heidi, 46, and Tom, 29, got secretly married in February exactly one year after the day they met. This second wedding was more traditional and was attended by friends and family including Tom’s twin and bandmate, Tokio Hotel singer Bill Kaulitz, and Heidi’s four children. This is Tom’s second marriage and Heidi’s third. Here’s more, from People:

Klum wore her hair down, accessorizing her straight locks with a white veil. The model also wore gold bracelets and a necklace that appeared to spell out “TOM.”

Meanwhile, Kaulitz was dressed in a white suit with a light blue shirt and pocket square.

After Klum legally married Kaulitz just two months after getting engaged on Dec. 24, the couple threw a lavish, traditional wedding ceremony on a yacht alongside family and friends, including Kaulitz’s twin brother Bill Kaulitz.

PEOPLE confirmed Klum and Kaulitz got legally married earlier this year after public records show they obtained a confidential marriage certificate in California. TMZ reports they tied the knot in February 2019.

At the time, Klum told Entertainment Tonight that they had a specific date in mind, but she didn’t give away too many details, simply saying the wedding would be “on time” and that preparations were “coming along.”

People reminds us that Tom’s brother threw him a bachelor party in Vegas last month, which confused me for the ten seconds I thought “aren’t they already married?” before forgetting about it. That must have been to prepare for this more traditional wedding. I like them together and Heidi has said they have a lot in common due to both being German. That probably does make a big difference to her as it can be tough being married to someone from another culture. I would think the age difference might become an issue, but Heidi had gravitated toward younger guys since her 2014 divorce from Seal. Congratulations to Heidi and Tom!

Heidi has been sharing photos from this trip, but she hasn’t posted her wedding dress yet. She’s been wearing white a lot, which is cute.

Tom’s brother Bill took this photo. I thought this might be her party dress, but I saw photos from the party and she wore a kind of caftan thing as everyone was swimming after the wedding. This dress is gorgeous and I would like it better as her wedding gown. 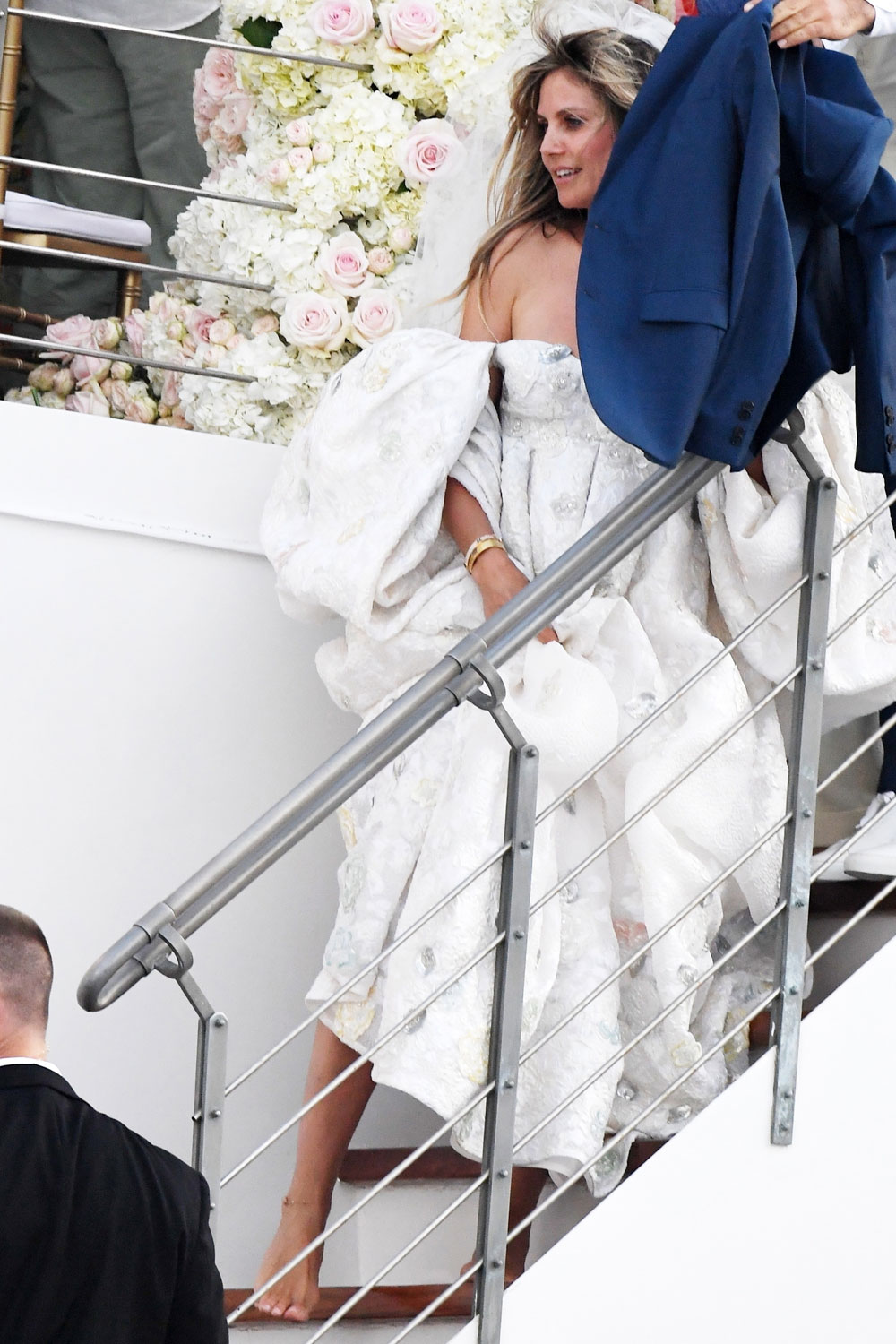 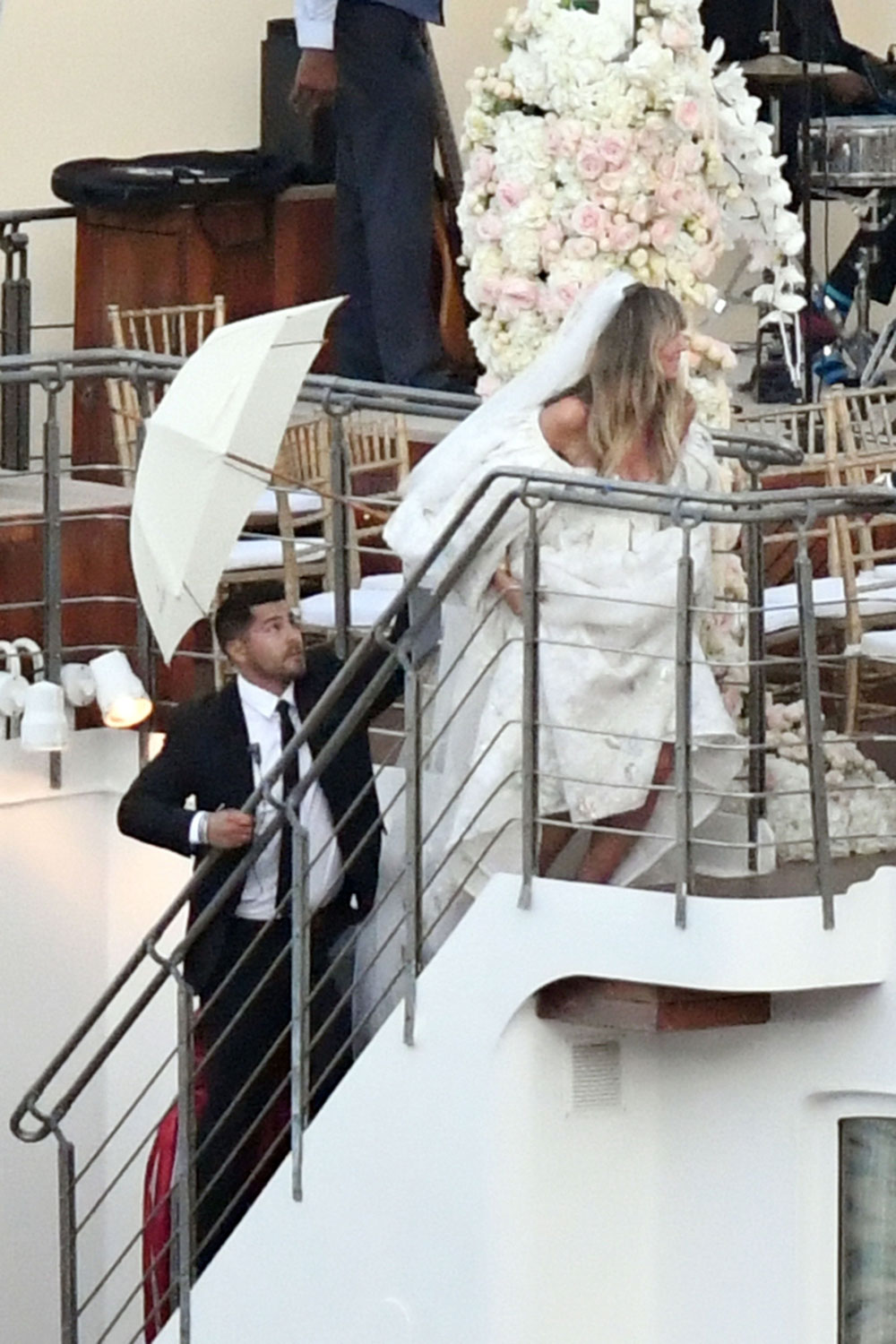