Emily Ratajkowski: My body doesn’t ‘discredit me and my political action’ 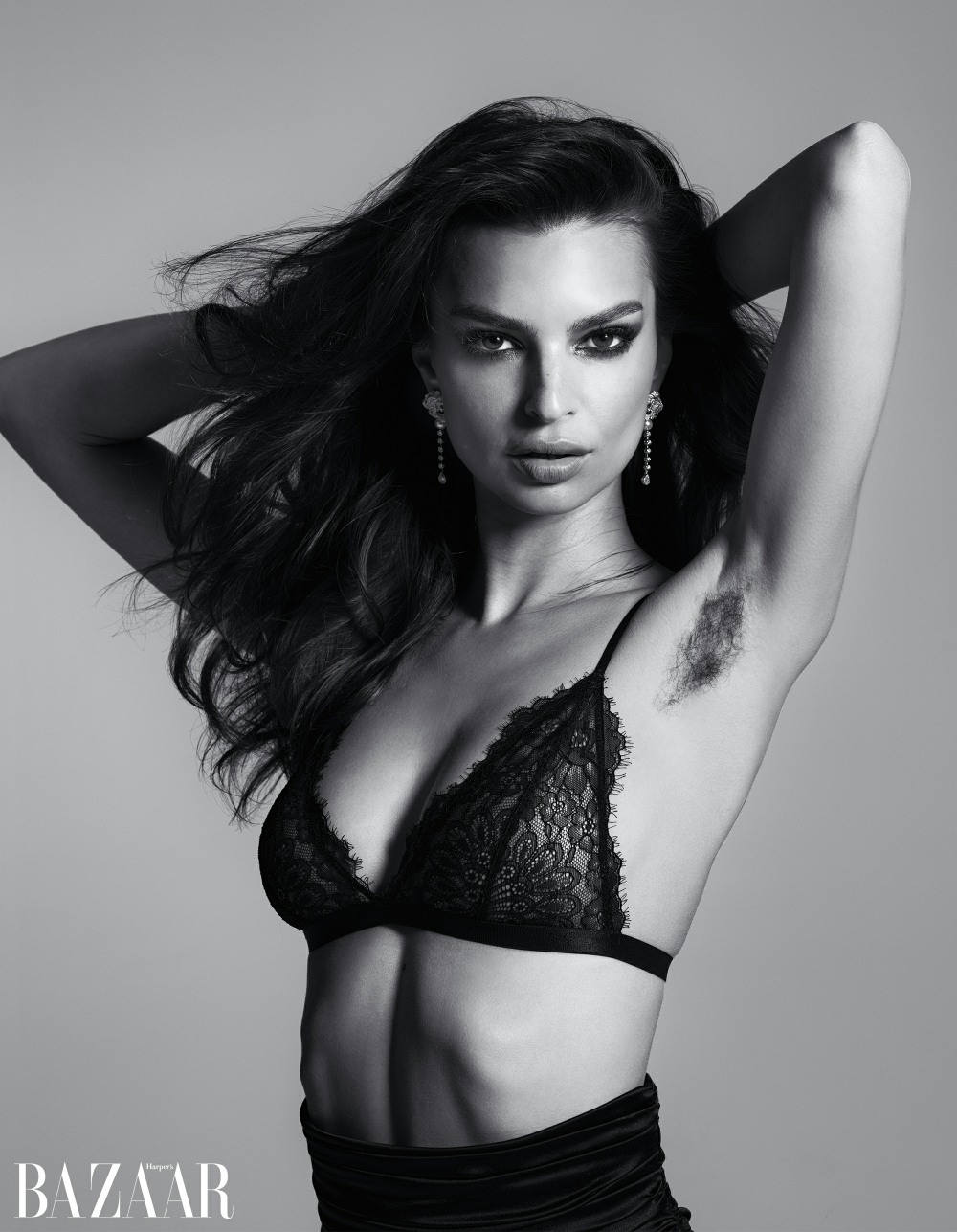 I think I’ve figured out my issue with Emily Ratajkowski. Like, I don’t hate her – I don’t even think she’s a vapid idiot. She says some interesting things and she gives a better interview than half of the women in Hollywood. She tries to talk about feminism in a meaningful way. But here’s what I’ve figured out: Emily seems to think that her exhibitionism makes her a feminist, when actually she’s an exhibitionist AND a feminist and the two things aren’t really overlapping. Does that make sense? I’m not going to tell an exhibitionist who constantly posts belfies that she’s not a feminist. She can be. But please don’t say that your need to expose your body incessantly is some feminist cause du jour. It is not. So, anyway, Emily has a feature in the latest issue of Harper’s Bazaar. She posed in a bra (what else) and showed off her armpit fur. This is Emily’s latest feminist cause (and she’s weeks too late).

Her privilege: “Before I go any further, let’s state the obvious: I’m a cis white woman. I’m well aware of the privilege I receive as someone who is heteronormative, and I don’t pretend to act like my identity hasn’t made some things easier for me. That being said, I want to take this opportunity to speak up about what my experience as a woman has been.”

Her choice to be traditionally sexy: “Sure, I’m positive that most of my early adventures investigating what it meant to be a girl were heavily influenced by misogynistic culture. Hell, I’m also positive that many of the ways I continue to be “sexy” are heavily influenced by misogyny. But it feels good to me, and it’s my damn choice, right? Isn’t that what feminism is about—choice?…As a fully grown woman, I continue to be shocked by how, in 2019, we look down so much on women who like to play with what it means to be sexy.”

Going braless to protest: “When I was arrested in D.C. protesting the nomination of Brett Kavanaugh to the Supreme Court, a man who has shown a gross amount of disrespect toward women in his life, the headlines were not about what I was protesting but instead about what kind of shirt I was wearing. Even women from the left, who fully supported the purpose of my protest, made comments about my missing bra underneath my white tank and jeans. In their minds, the fact that my body was at all visible had somehow discredited me and my political action. But why?”

On body hair: “If I decide to shave my armpits or grow them out, that’s up to me. For me, body hair is another opportunity for women to exercise their ability to choose—a choice based on how they want to feel and their associations with having or not having body hair. On any given day, I tend to like to shave, but sometimes letting my body hair grow out is what makes me feel sexy. And there is no right answer, no choice that makes me more or less of a feminist, or even a “bad feminist,” to borrow from Roxane Gay. As long as the decision is my choice, then it’s the right choice. Ultimately, the identity and sexuality of an individual is up to them and no one else. I’m definitely not saying that every woman needs to connect with their inner Thotiana; I’m just making the point that women can and should be able to wear or represent themselves however they want, whether it’s in a burka or a string bikini.

As I’ve said many times before, I don’t hate Emily Ratajkowski and her almost childlike understanding of bare bones feminism and feminist theory is better than nothing. Fundamentally, there’s nothing wrong with what she says: women should make their own choices about how to be, how to present themselves, whether to shave, what to wear, what to do with their bodies and who they sleep with. But lordy, Emily often acts like she’s being discriminated against for BEING SEXY. That’s her special class, that’s her minority status. As a Sexy Woman, people judge her for being sexy. It hurts her sexy feelings. No one will let her be sexy! Enough, Emily. 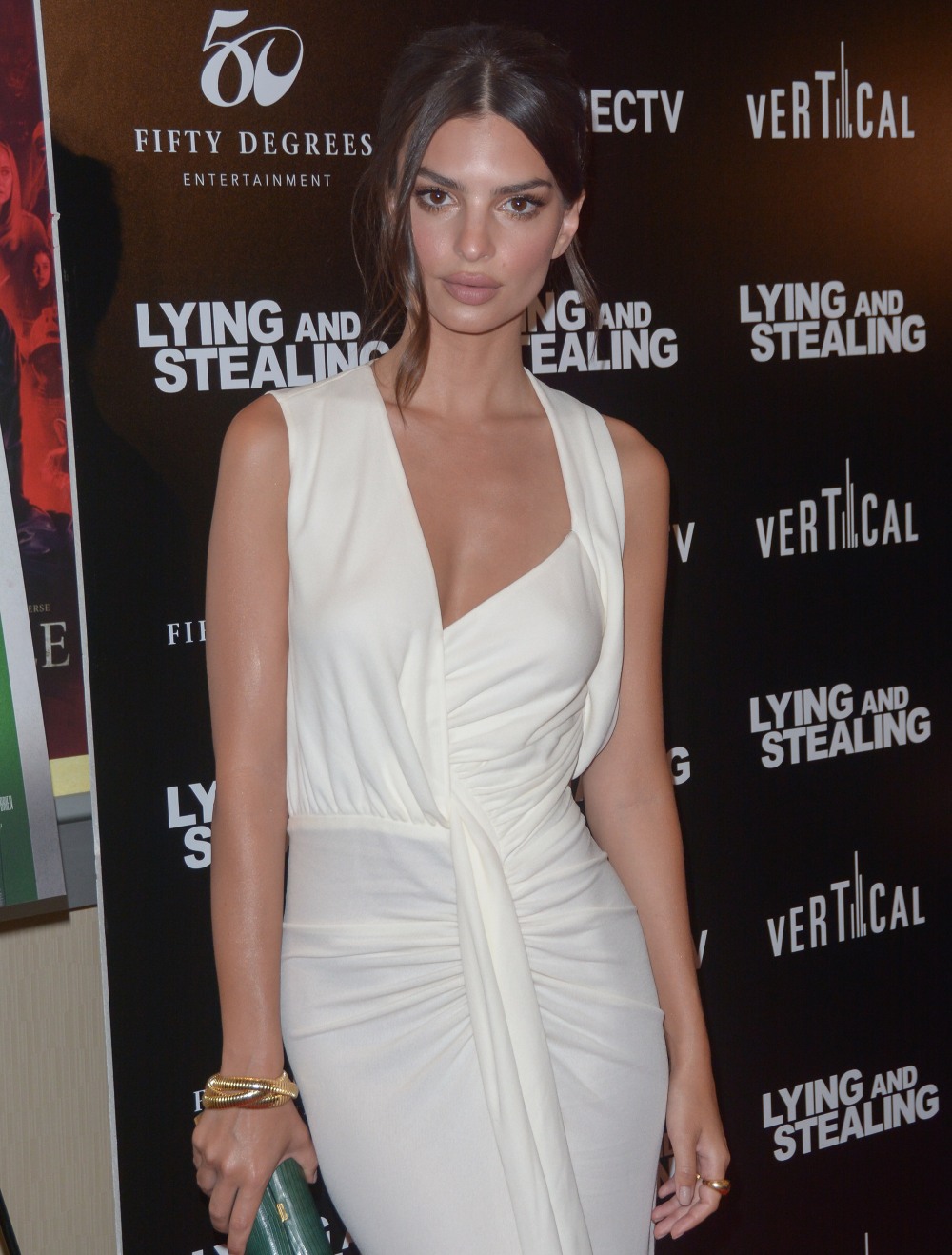 47 Responses to “Emily Ratajkowski: My body doesn’t ‘discredit me and my political action’”