Hugh Grant’s kids are ‘banned’ from acting: ‘Luckily, they display no talent’ 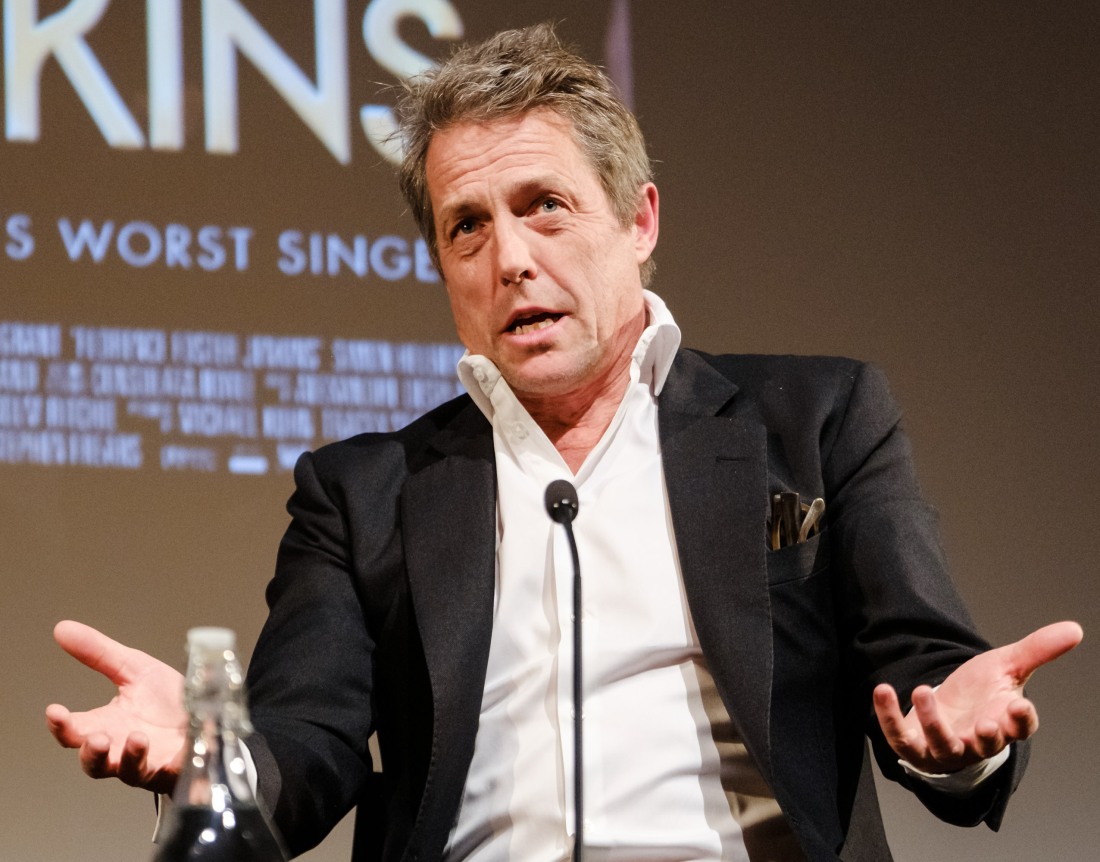 I was around for Hugh Grant’s first wave of success and it was somewhat enjoyable – Four Weddings and a Funeral put him on the map, and then he followed it up with some successful and not-so-successful films. Even in his “successful” years, he would go a while without anything sticking, then BOOM, Notting Hill or BOOM, Bridget Jones’s Diary. He did that for a while, then he took a break. He had five children in, like, seven years. He worked with Hacked Off on the British-media-hacking issue. And then slowly, he just started coming back to the acting world and there’s been something of a Grantaissance. That’s why Vanity Fair profiled him – Hugh has been quietly doing more work – more character work – and he’s getting the best reviews of his life. At the age of 58, he’s happier than he’s ever been, he’s working constantly and people actually seem to, like, genuinely respect him. You can read the full Vanity Fair piece here (it’s an excellent, funny read). Some highlights:

Working for three months on an HBO series, The Undoing: “I feel very overworked. It’s way too long—way too long. I’m such a baby about television. I didn’t even realize that HBO is considered kind of the crème de la crème. Is that right?”

His role in Paddington 2: “I was presenting I think at the Golden Globes, and they do that thing when you walk out, and they say, ‘From the forthcoming Paddington 2, Hugh Grant.’ And someone showed me Twitter afterwards, and it was…people were full of derision. ‘Christ, has it come to that. Poor old Hugh. Paddington 2. Sequel to a kids film.’ It’s particularly annoying in the case of Paddington 2, because I genuinely believe it may be the best film I’ve ever been in.”

His first foray into TV, A Very English Scandal, playing disgraced MP Jeremy Thorpe: “[I was] trying to find reasons not to do the job which is…I specialize in that. I sort of fear acting so much, or fear performing, I can always find reasons not to do something. I said, ‘I’m too old.’… It was a fabulous scandal. It had a sort of Monty Python element, because it was happening in the ’70s, sort of the last glimmer of old-fashioned British establishment, men in pinstripe suits, all backing each other up. So to have it all unraveling around this one man with murder and clandestine homosexuality, ‘biting the pillow,’ it was all brilliant.”

On Thorpe: “It’s helpful to find the tragedy of the character you’re playing. I think that having to live a lie was a sort of sadness to [Thorpe] all his life. And I also think that his narcissism, which by all accounts was kind of out of control, was a source of unhappiness. Because it stops you from really caring about other people and loving them and feeling embraced. He only really adored himself, and I think that’s a kind of torture.”

He’s the father to a seven-year-old, two six-year-olds, a three-year-old, and a one-year-old. “It’s sort of taken the lid off my ­bottled-up English emotions. I hate to talk this way, because it sounds so smug. And I used to loathe people who would say, ‘Hugh, you’ve got to have children. You haven’t really lived until you have.’ I hated those people. But there’s an element of truth. It’s one of those things you didn’t know you needed until you’ve done it.”

His kids are “banned” from acting: “The older ones, I’ve seen in a few school plays. And luckily, they display no talent. If I knew lots and lots of happy actors, I would recommend it. But seeing as I’ve never met a happy actor, I can’t. I’m just speaking off the top of my head, but the acting gene seems to me to come from people who have a relatively flimsy grasp of who they are. I’m not going to name names, but if you said to me, ‘What do you think of X?’ I’ll say, ‘Well, I have no idea who that person is.’ Because they’re always performing. They perform brilliantly, but you’ve no sense of them. And I think that’s a miserable way to live.”

Fatherhood & acting: “I think it’s possible that having children has made me better at acting. I mean, it’s a terrible cliché, but just sort of pure, unconditional love. It’s quite useful to have experienced it.”

What I enjoy about Hugh – and I think he’s always been like this – is that he shows people what it’s REALLY like to be a professional, working actor. He was like this in the ‘90s too – insecure, self-effacing, a little bit lazy, but you could also tell that he loved the perks of his job, and that he is (at heart) a drama queen who thrives on this sh-t. Basically, the man is a glorious mess and he’s always given great interviews. “The older ones, I’ve seen in a few school plays. And luckily, they display no talent.” I lol’d. His defense of Paddington 2 is brilliant as well. The thesis from VF was that Hugh is actually, quietly having a ball now that no one expects him to play the romantic lead. Now he gets to have zero personal vanity and just do whatever he likes. It does suit him. 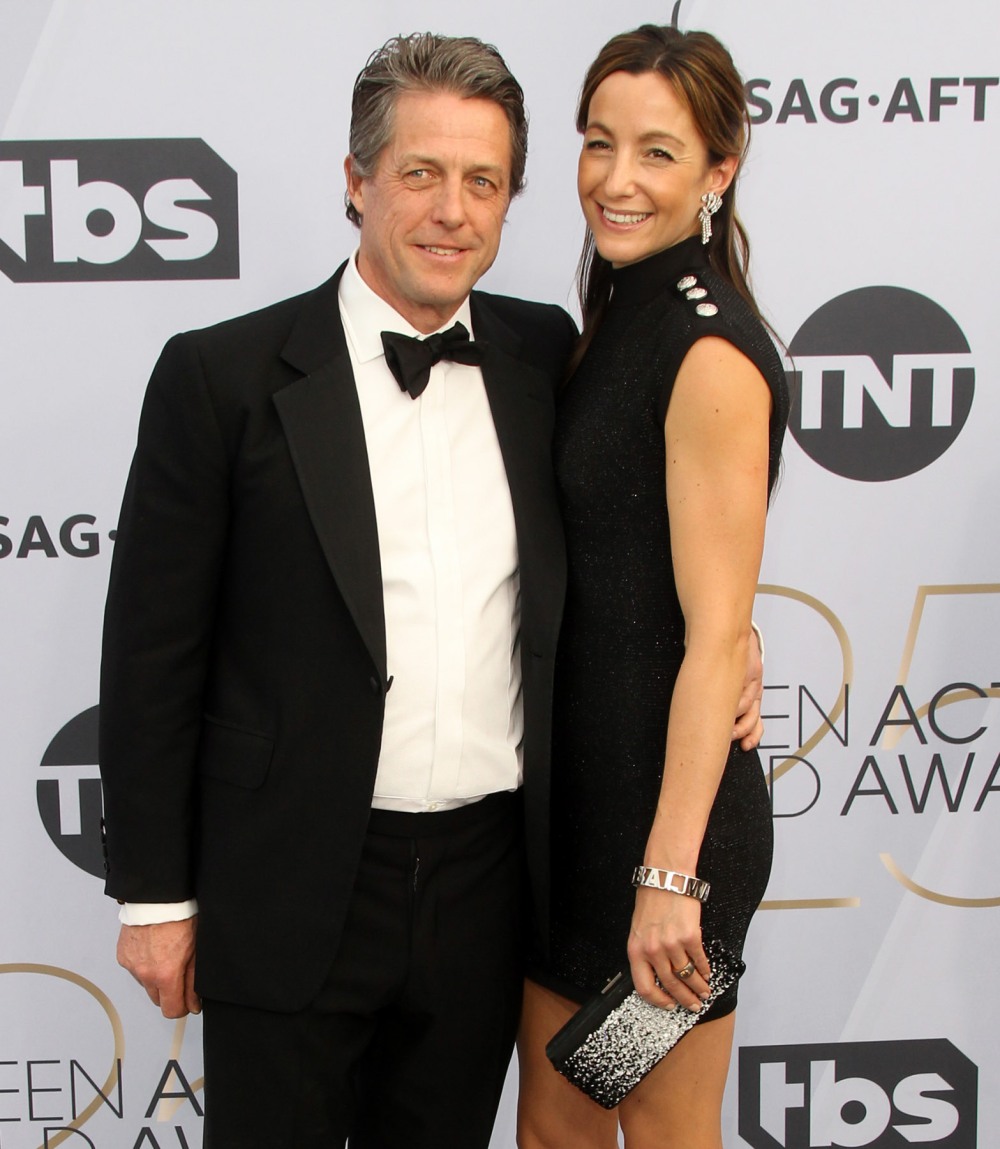 72 Responses to “Hugh Grant’s kids are ‘banned’ from acting: ‘Luckily, they display no talent’”