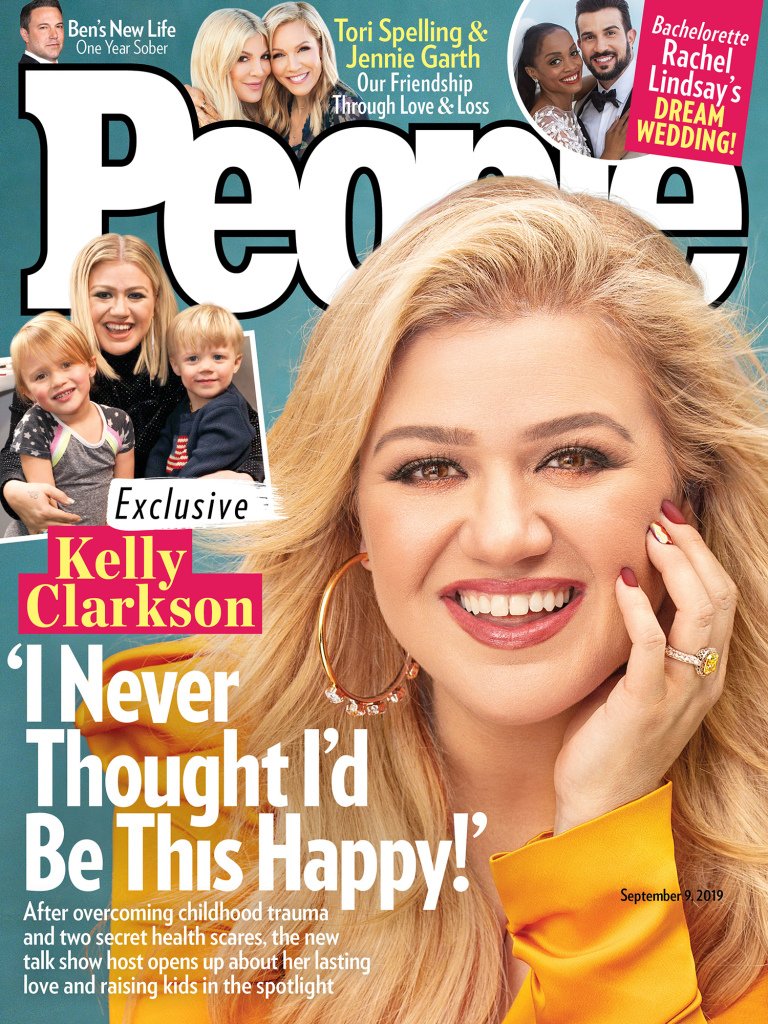 When we last talked about Kelly Clarkson, she was excitedly taking a tour of the set of her talk show, which is debuting September 9. She seemed to be recovering well after her appendectomy at the beginning of May. Despite being in pain for a week before the BMAs, she hosted and performed, and then was flown immediately to Cedars Sinai for the procedure. It turned out that she wasn’t completely out of the woods health-wise: a cyst on one of her ovaries burst while she was filming an episode of The Voice. Kelly covers the new issue of People, and she talked about her second on-air health scare:

“Blake [Shelton] was talking to me and all of the sudden, everything he said just went away and I had to grab his arm and I was like, ‘Something is wrong.’”

And that something, she later learned, was a cyst bursting on her ovary. “That was more painful than the appendicitis,” she says. “It was literally a week after my surgery so I was freaking out!”

After another trip to a busy E.R. (“I was like, ‘Anyone a fan? can someone help me get a hospital room?’”) Clarkson now says all is well. But the random back-to-back health scares did throw her for a loop.

“I was hysterically laughing and crying at one point in the E.R. like ‘What is happening?’” she says. Thankfully, “I’m great now. I’m totally great now.”

Kelly also spoke about how she enjoys being busy, but that one of her priorities when working on the schedule for her show was making sure that she had enough family time:

“I love being busy,” says Clarkson, who’s currently filming for The Voice as well as her show. “The schedule is intense but I actually work really well under pressure.”

But when it came to scheduling in time for her kids—daughter River Rose, 5, and son Remington Alexander, 3, as well as daughter Savannah, 18, and son Seth, 12, from [her husband]’s previous marriage—Clarkson, who’s known for her hilarious mom-life commentary on social media, made that a non-negotiable.

Poor Kelly. A burst cyst is painful and terrifying no matter what, but I can’t imagine how much more of a wreck she was since her cyst burst a week after her appendectomy. I find that whenever I have a medical procedure, I’m on extra-high alert after for any unexplained twinges or aches, in case whatever hasn’t actually been resolved. I’m so glad that she’s doing well, and hope that she has no more health scares! I think it’s funny that she asked if anyone in the ER was a fan, hoping to get herself into a room and seen faster (I don’t blame her)! I also think it’s great that she started off work on her show by figuring out a schedule that works for her (and presumably her staff) and will enable her to spend time with her family. Hopefully that will help keep her relaxed and happy as she juggles so many work commitments.