Scarlett Johansson: ‘I love Woody. I believe him, and I would work with him anytime’ 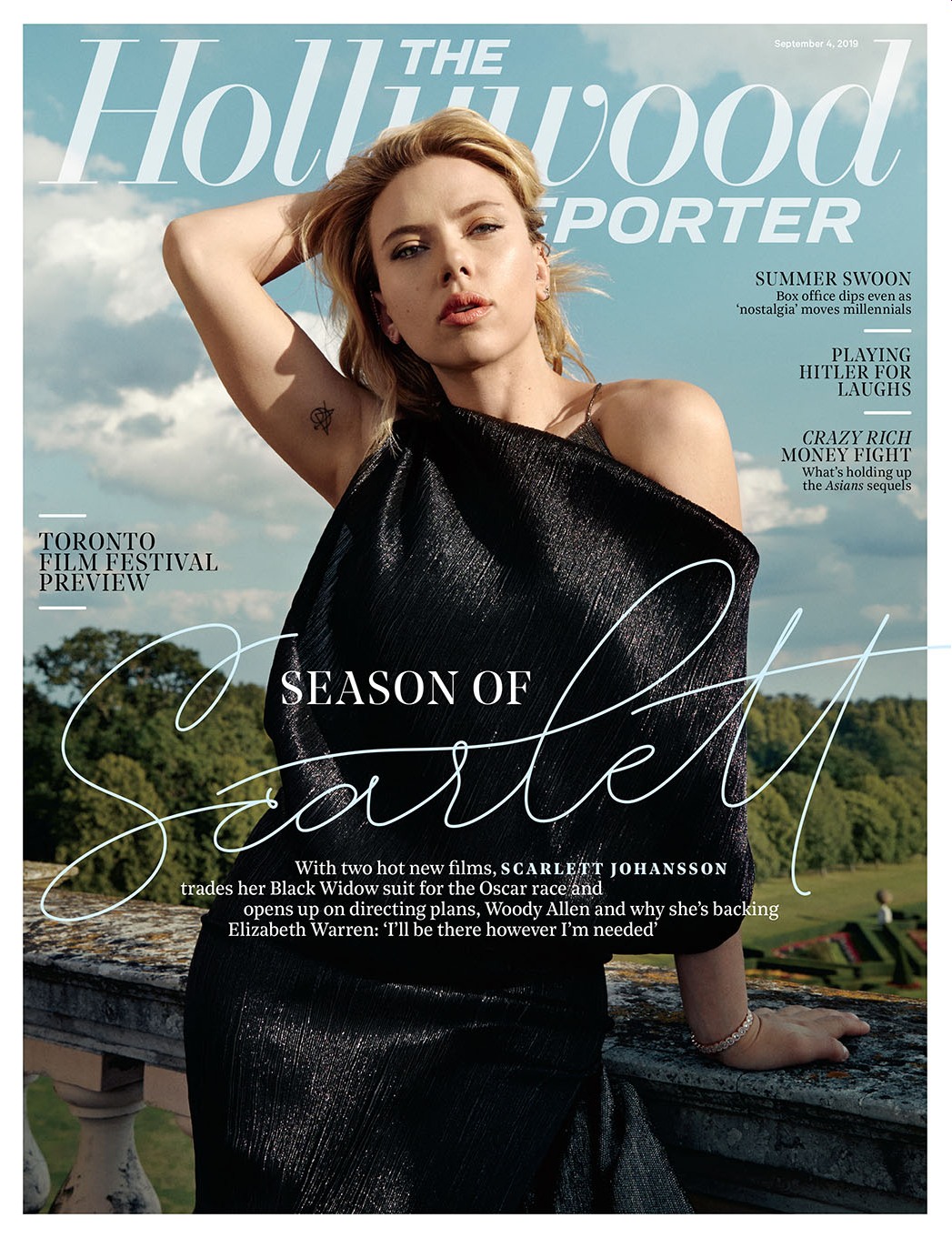 Scarlett Johansson covers the latest issue of the Hollywood Reporter and… her interview is sad and funny and stupid all at once. She’s doing this interview to promote Jojo Rabbit – Taika Waititi’s Hitler-parody movie – and Marriage Story, which might get an Oscar nomination. Plus she chats a bit about the Black Widow movie and politics and which transgender Asian tree she’ll play next. There’s a lot in this piece which I don’t even have room to cover, so you can read the full cover story here. The big headline is that ScarJo is probably going to be the centerpiece of a major Oscar push for Marriage Story and she decided to remind everyone that she’s ride-or-die for Woody Allen. I mean…

Whether she feels bad about supporting Woody during an era of Believe Women: “It’s hard because it’s a time where people are very fired up, and understandably. Things needed to be stirred up, and so people have a lot of passion and a lot of strong feelings and are angry, and rightfully so. It’s an intense time.”

On Time’s Up: “It was almost like you found something you didn’t even realize you needed. It was when I first understood what the word ‘triggering’ actually meant. Now it’s part of the zeitgeist, but it was like, ‘Oh. Oh, the thing I’m feeling. That’s what triggering means.’ I didn’t know. Suddenly, you didn’t have to take it anymore.”

Pay parity for Black Widow: She also has parity with her male counterparts when it comes to pay. Johansson will earn more than $15 million for Black Widow, similar to Chris Evans’ and Chris Hemsworth’s rates for playing Captain America and Thor, respectively. “Money is a taboo topic of conversation. But I will say that, yes, I’m on an equal playing field with my male cohorts.”

On how she believes she can plan transgender people, Asian people & trees: “There’s other voices that have more to say on this subject that probably need a microphone. Yeah. I think I’m done speaking on that subject.”

Who she’s supporting in 2020: “Other Democrats have said to me, ‘Oh, it’s really early to back someone.’ That kind of worries me because it doesn’t feel that early to me. I’m like, ‘Really?’ It’s disconcerting that there’s not a clear candidate at this time.” Johansson says she is supporting Elizabeth Warren. “She feels like someone who is thoughtful and progressive but realistic. It’s not like her campaign is making these crazy, outlandish promises that seem impossible to reach. There’s a strategy there.” She says she’ll be involved in the presidential election, whoever faces Donald Trump. “I’ll be there however I’m needed. If I can help with voter engagement, whether it’s doing some sort of PSA campaign or actively trying to involve people in the process of registering and voting. I really believe if people actually did vote, our government would look the way it’s supposed to, but people just don’t vote. It baffles me.”

On the potential Oscar campaign coming up: “I haven’t really been involved in the mix of awards season for a long time, so I’m not sure how I feel exactly. Maybe a little out of my element? I am excited to celebrate both of these films with Noah and Taika. I feel like both movies are the movies that either filmmaker and I set out to make, and that’s an incredibly rare thing. When you work hard on something with someone for such a long time, it feels good to have that work acknowledged.”

I feel like we go through some really crazy cycles with ScarJo, don’t you? She’ll give a terrible interview or spend months lying about playing a whitewashed Japanese character and everyone is like “wow, ScarJo is canceled.” And then a month later, everybody loves her again and then she does another terrible interview. Anyway, this is just a reminder – ScarJo unapologetically supports Woody Allen and she believes his side of the story. And this was the absolute PERFECT joke about it. *chef kiss*

Someone trying to play Soon Yi in the Woody Allen biopic https://t.co/RuGKnV9hQ1

Scarlett Johansson's got two hot awards contenders — #MarriageStory and #JojoRabbit — her #Avengers spinoff and the mantle as the world's highest-grossing actress, but she isn't afraid to say how she really feels about Disney and her choice for president https://t.co/qoFpYwtRgc pic.twitter.com/GGqSP1ZjAA

Photo and cover courtesy of THR.

139 Responses to “Scarlett Johansson: ‘I love Woody. I believe him, and I would work with him anytime’”