Joaquin Phoenix: Rooney Mara is ‘the only girl I ever looked up on the internet’ 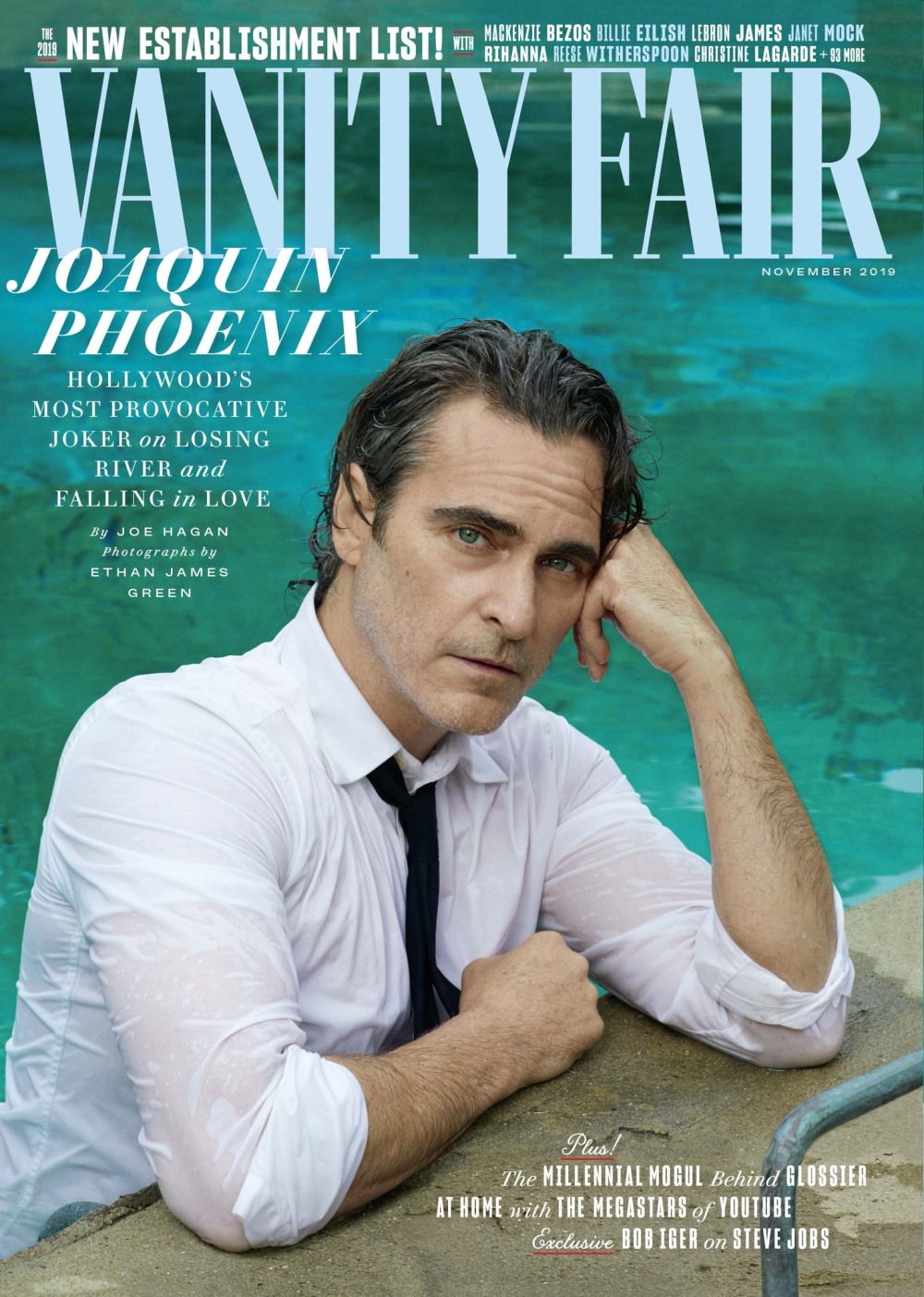 Before reading the Vanity Fair cover story, I just looked at this photo of Joaquin Phoenix for a while. I know he’s not everybody’s cup of tea, but back in the day, I was really into him. Basically, everything from To Die For to Gladiator was my absolute favorite Joaquin. My crush subsided significantly after that, but this cover shot really brought it back. So vulnerable, so beautiful. Sigh… now let’s get to the cover story, where Joaquin is promoting Joker. Joaquin might end up with an Oscar nomination for Joker, and the film might inspire incels to murder people. So… it’s complicated. So is Joaquin’s life, from spending the first years of his life in a cult to the death of his older brother River to where he is now in his life: pretty happy and loved up with Rooney Mara. You can read the full piece here - Joaquin only gives these kinds of interviews once every ten years, so enjoy it.

On the critical reaction to Joker: “I didn’t imagine that it would be smooth sailing. It’s a difficult film. In some ways, it’s good that people are having a strong reaction to it.” Phoenix mostly wants to let the film speak for itself. “There’s so many different ways of looking at it. You can either say here’s somebody who, like everybody, needed to be heard and understood and to have a voice. Or you can say this is somebody that disproportionately needs a large quantity of people to be fixated on him. His satisfaction comes as he stands in amongst the madness.”

On his CV full of intense drama: “From a very young age, I had an allergy to—what’s the word?—to just frivolous, meaningless kids’ stuff. From an extremely young age. And I don’t know why. I’m sure you want some Freudian explanation, perhaps there is.”

His dogs: He’s in the kitchen boiling a pot of sweet potatoes for his vegan dogs, Oskar and Soda, the latter a large white pit bull mix he rescued from euthanasia 13 years ago. Soda has an allergy to direct sunlight, which means she must be kept out of the sun from nine to five. Phoenix bought her a specially made suit to go to the beach. “She looks so f–king cool but she doesn’t like it,” he says.

He researched Rooney before they got together: He believed Mara despised him during the making of Her but later learned she was just shy and actually liked him too. “She’s the only girl I ever looked up on the internet. We were just friends, email friends. I’d never done that. Never looked up a girl online.”

He’s still vegan: “I eat really healthy. I don’t really like junk food. I don’t like processed foods. Right? But I still can—like, I’ll f–ck up a bag of chips. Like a f–kin’ Subway sandwich and sh-t.”

River Phoenix tutored him on films: “My brother came home and he was like, ‘We need to watch this movie called Raging Bull.’ And I’m like, ‘What?’ Prior to that, I watched Caddyshack and Spaceballs. And Woody Allen comedies. He suggested I change my name [back to Joaquin] and then, I don’t know, six months later, whatever it was, we were in Florida, we were in the kitchen, and he said, ‘You’re going to be an actor and you’re going to be more well known than I am.’ Me and my mom looked at each other like, ‘What the f–k is he talking about?’ I don’t know why he said that or what he knew of me at the time. I hadn’t been acting at all. But he also said it with a certain weight, with a knowing that seemed so absurd to me at the time, but of course now, in hindsight, you’re like, ‘How the f–k did he know?’ ”

River’s death isn’t the “Rosebud” of his life: “It’s one, it’s one of the Rosebuds but it’s not a Rosebud in the way that people think. At all.”

What’s weird is that, bizarrely, it feels like Joaquin is really playing the Hollywood game, but he’s figured out a way to do it on his terms. He even ends on a positive note, saying that the difficult work is “what sustains me. I enjoy it. I love my life. I f–king love my life.” Does Joaquin really want to do an Oscar campaign? Probably not. But he made a studio movie about a famous villain, so he’s playing the game and if he ends up with an Oscar nomination, so be it. Anyway, there’s tons of stuff in that interview which I couldn’t even fit in these highlights – he talks more about “understanding villains” and how his family ended up in the Children of God cult and more. One thing I’ll say is that I sort of genuinely think he’s cute with Rooney.

“It’s a difficult film,” Phoenix says of #Joker. The story of a lone gunman with his own righteous rationale, the project is uncomfortably close to current events: “In some ways, it’s good that people are having a strong reaction to it.” Read our November cover story at the link in bio. 📸 @ethanjamesgreen Story by: Joe Hagan (@haganomics) Styled by: @Tom_Guinness

53 Responses to “Joaquin Phoenix: Rooney Mara is ‘the only girl I ever looked up on the internet’”