Demi Lovato apologized for her trip to Israel, didn’t know it would be controversial

I am an American singer. I was raised Christian and have Jewish ancestors. When I was offered an amazing opportunity to visit the places I’d read about in the Bible growing up, I said yes. There is something absolutely magical about Israel.  I’ve never felt such a sense of spirituality or connection to God…something I’ve been missing for a few years now.  Spirituality is so important to me…to be baptized in the Jordan river – the same place Jesus was baptized – I’ve never felt more renewed in my life. This trip has been so important for my well-being, my heart, and my soul.  I’m grateful for the memories made and the opportunity to be able to fill the God-sized hole in my heart. Thank you for having me, Israel 💗

I do not follow any Abrahamic tradition when it comes to religion or spirituality, but I’d still love to go to Israel one day and see some of the religious and historical sites and experience the Tel Aviv nightlife and all of that. I would imagine that many people would love to make a trip to Israel for various religious and historical and social reasons. Demi Lovato was one of those people – she was offered a free trip to Israel in exchange for some social media posts, and since she didn’t have anything else to do and she fancied a free trip to Israel, she went and did the Instagrams and everything was fine. Except everything is political these days and of course an American pop star doing the work of the Israeli Tourism Board will be seen as a political act. And so Demi apologized.

The singer returned to the United States earlier this week after what she described as a “magical” journey traveling around Israel. Lovato opened up about a number of things she experienced, including being baptized in the Jordan river and her somber visit to Yad Vashem, the World Holocaust Remembrance Center, in Jerusalem. However, her posts also faced a lot of heated criticism from many who accused the singer of promoting or supporting Israel amid the country’s long-standing conflict with Palestine, and insinuated that the singer’s posts were meant to represent a political stance on the conflict.

Lovato explained in the lengthy post shared to her Instagram story that she feels “extremely frustrated” by the recent controversy, and that she feels bad for unwittingly upsetting or offending anyone.

“I accepted a free trip to Israel in exchange for a few posts. No one told me there would be anything wrong with going or that I could possibly be offending anyone,” Lovato wrote. “With that being said, I’m sorry if I’ve hurt or offended anyone, that was not my intention.” Lovato went on to claim that no one had told her about the “potential backlash” that her trip to the nation, and her subsequent posts sharing her photos from her travels, could generate.

“This was meant to be a spiritual experience for me, NOT A POLITICAL STATEMENT,” Lovato stressed. “Now I realize it hurt people and for that I’m sorry.” The singer also told her fans that she’s “sorry I’m not more educated, and sorry for thinking this trip was just a spiritual experience.”

I’m including her statement (which was posted to her IG Stories so only her followers could read it) below, and some of her Instagrams from Israel are also included. My take is that… Demi absolutely should have known that everything is garbage and everything has political implications, especially in the Middle East? So it’s funny for her to argue “No one told me there would be anything wrong!” Like, pick up a book. Watch the news. That being said, there are many people who just want to visit Israel because there ARE so many things to do as a tourist. And trust me, if Demi didn’t know the trip would be “controversial” – lmao – then she clearly didn’t make the trip as some kind of political statement about Palestinians. She was a prop, absolutely. But I would say she was more of a prop for Israeli tourism than Israeli politics. 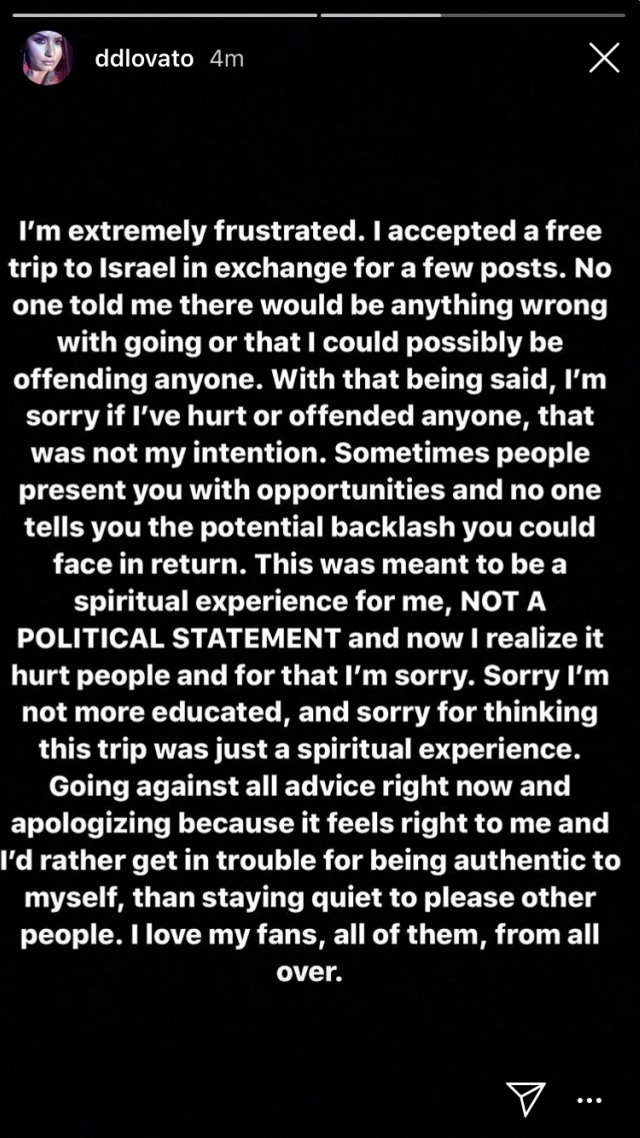 My heart was absolutely broken in Yad Vashem. This was such a beautiful tribute and a reminder that we can never forget.

33 Responses to “Demi Lovato apologized for her trip to Israel, didn’t know it would be controversial”