David Benioff & Dan Weiss have pulled out of the ‘Star Wars’ franchise, huh 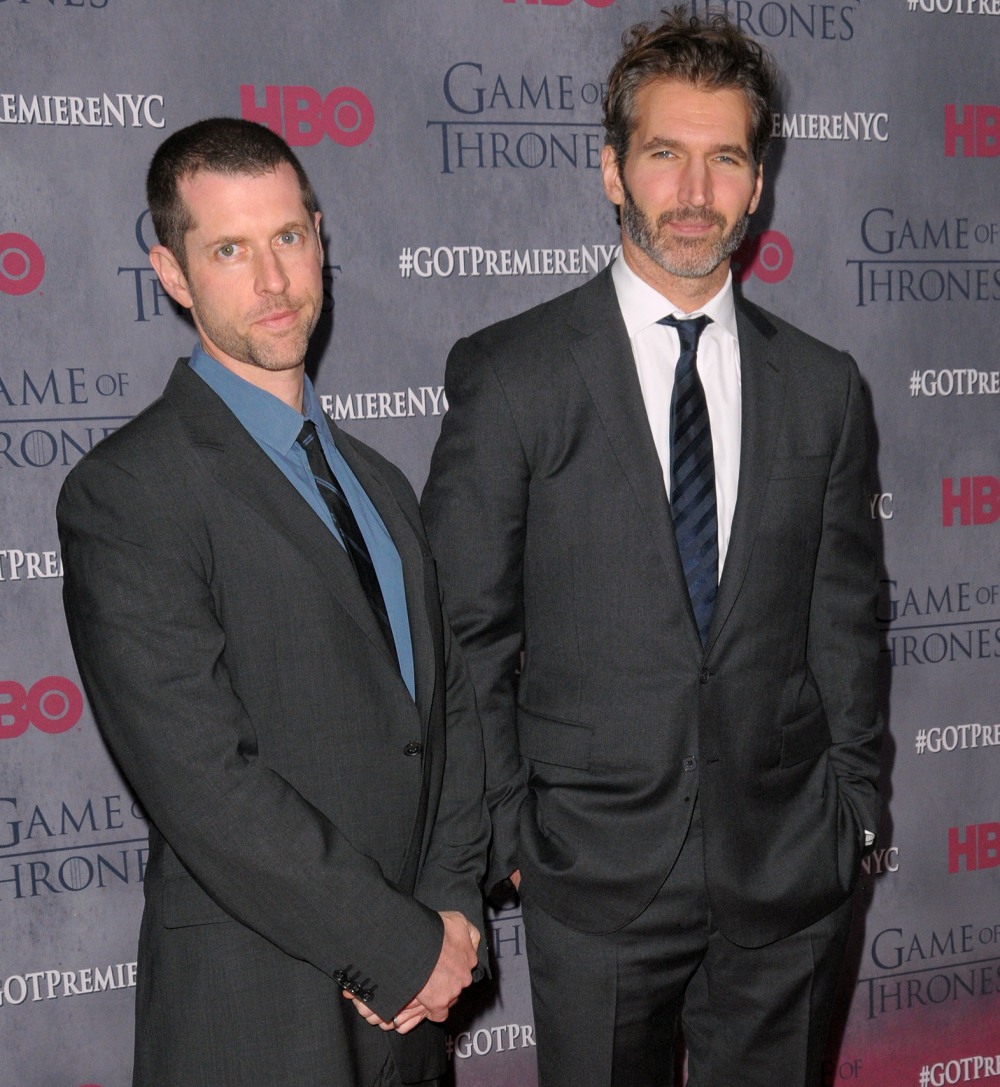 David Benioff and Dan Weiss are tools. Their appearance in Austin this past weekend confirmed that. They waltzed into HBO and used their huge Game of Thrones budget as some kind of on-the-job film school. They didn’t care about the characters or the stories. They were too ensconced in their own privilege to actually consider the idea that they were not the people who should adapt these stories onto the screen. If any of this sounds familiar, it’s because this happens again and again in Hollywood – white dudes are given every f–king opportunity to fail up. They’re given $80-100 million film budgets when they are untested, unproven and ill-equipped. Kathleen Kennedy controls the Star Wars franchise now, and she’s one of the Hollywood players most guilty of this: so many of the problems facing the Star Wars-adjacent movies are rooted in her decisions to hand off these properties to white dudes who don’t know WTF they’re doing. Which is why it felt sort of perfect (terribly perfect) that Kennedy hired Weiss and Benioff to take charge of the Star Wars franchise in 2022. Except now… they’re out. ORLY.

David Benioff and D.B. Weiss, the duo who in 2011 launched the singular screen sensation known as Game of Thrones, have walked away from their much-publicized deal with Disney’s Lucasfilm to launch a feature film trilogy in 2022. Benioff and Weiss were supposed to usher in the post-Skywalkera era of the Star Wars brand with a 2022 new-start story that would stake out a new frontier for the era-defining cinema brand created by George Lucas. The Emmy-winning pair cited their historic deal with Netflix. They said their enthusiasm for Star Wars remains boundless but, regrettably, their schedule is full up.

“We love Star Wars,” the pair said in a statement to Deadline. “When George Lucas built it, he built us too. Getting to talk about Star Wars with him and the current Star Wars team was the thrill of a lifetime, and we will always be indebted to the saga that changed everything.”

That 2022 release date made the Benioff/Weiss start-up the next-in-line Star Wars installment following this December’s The Rise of Skywalker, the finale chapter of the Skywalker family chronicles that have been captivating moviegoers since 1977. Lucasfilm president Kathleen Kennedy has plenty of other Star Wars projects in the hopper — The Rise of Skywalker in December, The Madalorian in 15 days on Disney+, and the ramping Ewan McGregor series, to name just three — so it’s unclear how much of a setback the now-nixed trilogy presents. There’s no shortage of upcoming collaborators lined up, either, among them Rian Johnson and Kevin Feige.

Did Benioff and Weiss have a rare moment of self-awareness where they suddenly understood that they were creatively incapable to helming such a gigantic property? Or did Kathleen Kennedy tell them that it probably wouldn’t work out, and they got to “quit” without any drama? I think it’s probably a little bit of everything, honestly. And keep in mind, Disney has decided to pull back on all of the Star Wars stuff after The Rise of Skywalker. They realized they were oversaturating the market with all of the spinoffs and whatever. Plus, The Last Jedi was trash and it’s not like Benioff and Weiss would suddenly add some fresh new voice to a franchise which is… not doing great from a storytelling perspective. I mean, sure, the films are still crazy popular and crazy-lucrative. But…come on.

59 Responses to “David Benioff & Dan Weiss have pulled out of the ‘Star Wars’ franchise, huh”