Sharon Stone: ‘People think if you’re beautiful, you must be stupid, shallow’ 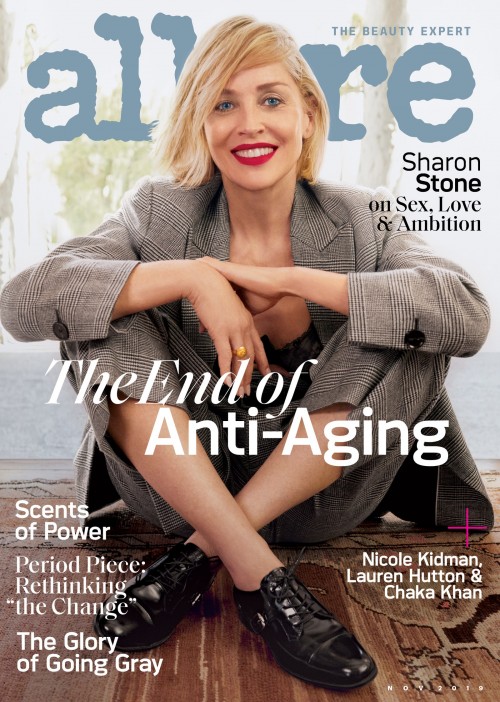 Sharon Stone is covering the November issue of Allure. The last time we talked about her she was comparing her career slump after she had a stroke to Princess Diana’s death. It was bizarre and Sharon has quite a high opinion of herself, as I said in that story. I also said that it’s possible that Sharon’s stroke has made her that much more blunt than she used to be, which she’s said is the case. In Allure Sharon really opens up to the interviewer about her life and how she struggled after her stroke. She sounds lonely, frankly, and like she’s looking for a partner. She says she would really like to get laid (my words), but only by someone she’s in a committed relationship with. Here’s more of what Sharon said. She got the most headlines for saying that Basic Instinct couldn’t be made today, which is true, you can read that at the source. I’m not quoting it because she said so many other interesting things. She was only on the phone with the interviewer and it’s like she was treating her like a therapist.

Allure: Have you had a favorite age?
SS: My 40s were so beautiful. I couldn’t work because women, once they got to be 40, were not given jobs in Hollywood. I was a mom with three beautiful little boys. I was recovering from a massive brain injury, and I was in custody court constantly over my oldest child. But there was something wonderful in that period of all those challenges. And even though no one wanted to date me — no one would want a woman that had little children — it was a period of reconciliation and change, and understanding myself. It was my period of the biggest change, but the period where I thought I was the most beautiful.

Allure: Is there anything that you wish you had or hadn’t done in your 40s?
SS: I wish that someone had fallen in love with me, I guess. I think life would have been less harsh with a partner.

SS: I would say — this is speculative at this moment, that should I have a lover — I would think that sex would be better, because it would come from love. Sex for the sake of sex at this point in my life is not interesting.

ALLURE: You don’t seem to get lonely.
SS: I absolutely get lonely. It would be false to say that the happiness of my solitude doesn’t come sometimes with the melancholy of aloneness. But no one is going to find the beauty of genuine love through flagrant promiscuity.

ALLURE: I hope this isn’t too personal. When was the last time you cried?
SS: I’m crying a little bit now. It’s not really a sad thing. It’s more — life is so beautiful. When we’re young and we’re so driven by the follies of our youth, sometimes we can miss some of the great beauty and wonder of the simplicity of every day.

That stuff about Sharon wanting a man kind of made me sad for her. She’s Sharon freaking Stone, that’s surprising to hear. I think it’s different for these famous single women as they must be intimidating in a way. As for feeling her most beautiful in her 40s, I can sort of relate and I hope this lasts for me. I think it’s because I’m comfortable with who I am and also because my son is a teenager and I finally have more time and freedom. I doubt that would be the case if I was raising little kids like she was. As for the quote in the title, I think she must have opened with that and it’s myopic and self absorbed, but that’s Sharon. She did open up after that, and I found myself feeling for her.

61 Responses to “Sharon Stone: ‘People think if you’re beautiful, you must be stupid, shallow’”