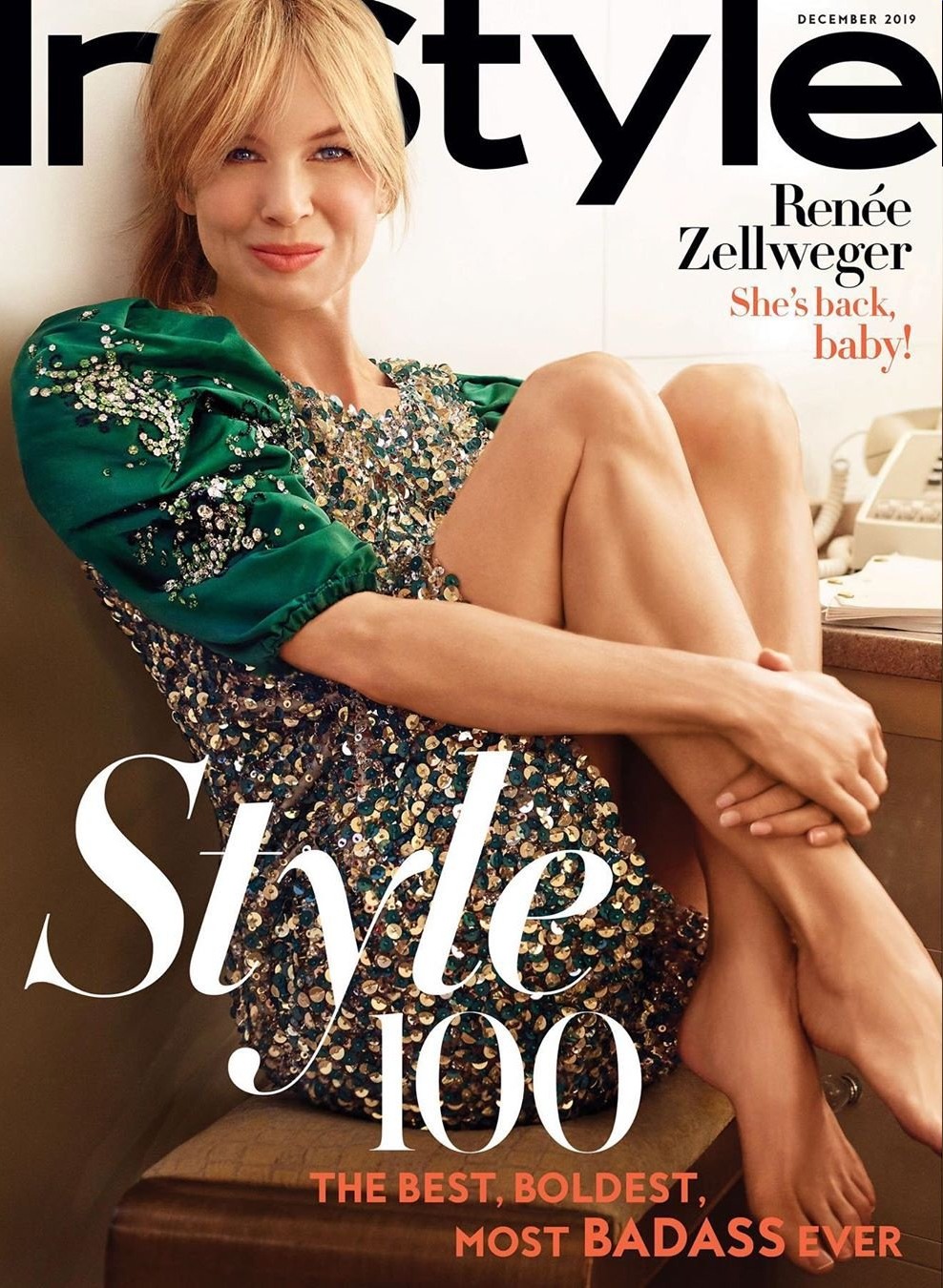 Renee Zellweger covers the December issue of InStyle to promote Judy, her “last years of Judy Garland” movie which is getting significant Oscar buzz. I would even say that Renee is one of the frontrunners in the Best Actress Oscar race. Which… I haven’t seen the film, but the trailers are so bad and I just can’t believe that Renee is picking up all of this praise and critical acclaim for it. But we’ll see. As we all know by now, Renee got some noticeable face work several years back, only she’s still pissed at us for noticing. In some recent photos, her face almost looks settled back, and then… there’s this InStyle cover shoot. Where you can still see the work. Damn, Renee. Anyway, the cover interview is okay. She talks about aging and “going away” for several years and she tells a long-winded and pointless story about a bad breakup which was covered in the tabloids (the point she was trying to make was that tabloids lie, but guess what, Renee lies too). Some highlights:

What she did for her 50th birthday: “I imported. I had my family here for the birthday, and we danced all night and ate too much. It was good.

Aging is a privilege: “It doesn’t consume me because it’s inevitable. It’s a privilege. And, I don’t know, I’d rather celebrate each phase of my life and be present in it than mourn something that’s passed. I don’t want to miss this moment to be something that I used to be. That’s for someone else now. And good luck to them, because you have to survive a lot to move forward to your next state. I’m not saying I’m canceling my gym membership anytime soon, because I’m not. I’d rather be a healthy, productive woman in each stage of my life than apologetic. I also don’t want to perpetuate the notion that somehow moving forward in your life is wrong.

On the “actors are too emotional” claim: “Different hardships that are unexpected can sort of assist you moving forward. With this job, it’s peculiar because you’re not born with the faculties to know how to handle the things that come your way. I found that shifting your perspective is really important. I don’t internalize things, and I don’t personalize things, and I don’t engage. I spend a lot of time focusing on the work itself, not the consequences of the work or people’s perceptions of it…. I learned pretty early on. I was devastated about a breakup, and it was plastered all over the tabloids. None of it true, all of it humiliating. Never mind that living the experience [of the relationship] was plenty.”

Taking time away from Hollywood: “Well, I mean, it was nice to have authentic exchanges with people for a while. When you’re not on the radar, people don’t clock who you are; you’re just a person at the coffee shop ordering a coffee. You have conversations that aren’t about work. And when someone is having a bad day, it doesn’t change. They just have a bad day with you, and it’s a funny thing to appreciate, but I do. [laughs] It’s nice. It’s real and not edited. We meet as human beings.

Whenever she talks about her years away from Hollywood, I always feel like there’s something being left unsaid, is it just me? She doesn’t owe us an explanation, obviously, and it feels like that time off was something she did for her mental health, and so be it. But I always wonder what preceded it. What was the “f–k it, I’m going away for three years” moment leading up to it? As much as I always suggest that various celebrities need to take a break from the spotlight and just go off somewhere and be normal, few of them actually do that. Renee did. And it seemed to be the healthiest choice for her. And now she’s been rewarded with Oscar buzz for a Judy Garland movie. *deep sigh*