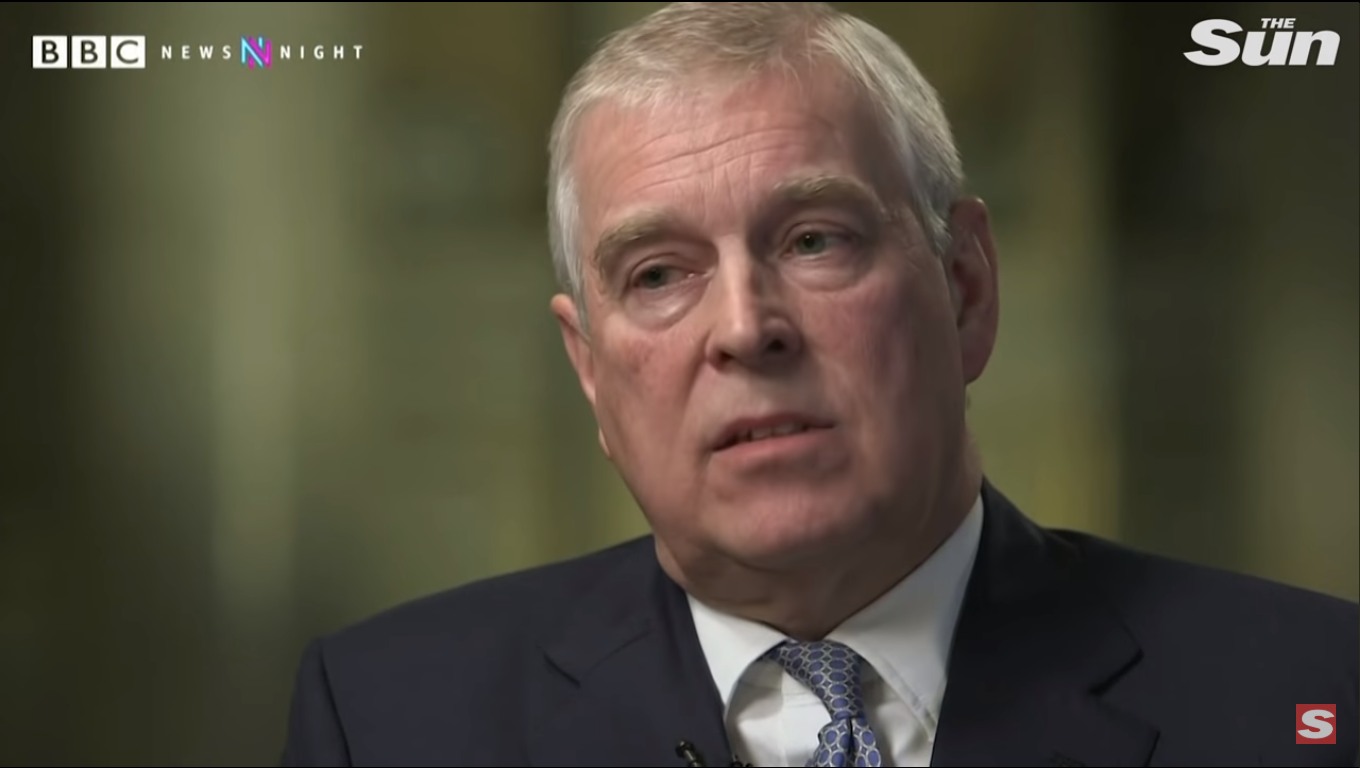 Prince Andrew’s BBC Newsnight interview only aired on the BBC-News cable station here in America (which I’m not sure many people have?). Which is interesting, especially given Amy Robach’s hot-mic thing where she was talking about the palace shutting down the American reporting around Jeffrey Epstein’s royal and political connections years ago. There’s a clear interest and newsworthiness for this interview and I wouldn’t be surprised if larger chunks of it were made available on network TV here in the US. As for what Andrew said… my God. Reportedly, Andrew did not see the questions beforehand and clearly, he was not prepped for the interview. Or maybe his people were like “please don’t do this, it will blow up in your face” and he was like “I do what I want.” In any case, the clips from the interview are absolutely horrendous. Keep in mind, this was conducted at Buckingham Palace. Where mummy’s favorite son is carefully protected from most things. Except this. This is an absolute mess. You can read the BBC’s “highlights” here.

On Virginia Giuffre’s claim that she was trafficked to Andrew three times: “It didn’t happen. I can absolutely categorically tell you it never happened…I have no recollection of ever meeting this lady, none whatsoever.”

The Pizza Express in Woking: Addressing Ms Giuffre’s claims that she had dined with the prince, danced with him at a nightclub, and went on to have sex with him at the house of Ghislaine Maxwell, a friend of the prince, in Belgravia, central London, he said “there are a number of things that are wrong with that story”. He said the date when Ms Giuffre says he had sex with her was 10 March 2001, when he had taken his daughter Beatrice to Pizza Express in Woking for a party before spending the night at home. “Going to Pizza Express in Woking is an unusual thing for me to do,” he said. “I remember it weirdly distinctly.” Ms Giuffre described him providing her with alcohol at a nightclub, but Prince Andrew said: “I don’t drink, I don’t think I’ve ever bought a drink in Tramps whenever I was there.”

On Virginia’s claims that he was sweaty: “I have a peculiar medical condition which is that I don’t sweat or I didn’t sweat at the time,” he said, blaming it on “an overdose of adrenaline in the Falklands War”. He said he had only started to be able to sweat again “in the recent past”.

On the photo of his arm around Virginia: He said he had “absolutely no memory” of it. “Investigations that we’ve done” have been unable to prove whether the photograph was faked, he said, “because it is a photograph of a photograph of a photograph”. Prince Andrew said he did not recall going upstairs in that house, said he was not dressed as he usually would be if he was in London and added “we can’t be certain as to whether or not that’s my hand… I’m at a loss to explain this particular photograph.”

Whether he partied with Epstein: The duke rejected the perception of him as “the party prince” in the past, and said “going to Jeffrey’s was not about partying, absolutely not”. He said he had first met Epstein through his girlfriend Ghislaine Maxwell in 1999 but it was a “stretch” to say they were close friends and they saw each other “a maximum of three times a year”.

How close was he to Epstein? Prince Andrew acknowledged he had stayed on Epstein’s private island, visited his home in Palm Beach, Florida, and travelled on his private plane. He said he wanted to learn more about the “international business world and so that was another reason” for going to visit the 66-year-old American financier in New York, as the prince became special representative for international trade and investment. He invited Epstein to Princess Beatrice’s 18th birthday at Windsor Castle in July 2006 but said “certainly I wasn’t aware” that a warrant had been issued in May for his arrest for sex crimes.

Spending days in Epstein’s mansion in 2010: “I went there with the sole purpose of saying to him that because he had been convicted, it was inappropriate for us to be seen together.” He stayed several days and attended a dinner party, however. “It was a convenient place to stay,” he said, but added “with a benefit of all the hindsight that one can have, it was definitely the wrong thing to do”. The duke denied an account by another guest that he had been seen receiving a foot massage from a Russian woman. Asked about a picture of him and Epstein taken in Central Park in 2010, Prince Andrew said “somebody very cleverly took that photograph” but that they had not been able to “find any evidence” that Epstein had set it up.

How his family reacted to the Epstein situation: The fallout over Epstein’s arrest had been “a constant sore in the family”, the prince said. Following the allegations made against him in a 2015 deposition, Prince Andrew said the wider Royal Family “couldn’t be more supportive” and his immediate family “were at a loss”. The duke denied the episode had been damaging to the Queen, but said “it has to me, and it’s been a constant drip in the background that people want to know”. He said he would like to be able to give “closure” on the issue but “I’m just as much in the dark as many people”. He said that choosing to talk about the allegations was “almost a mental health issue to some extent for me”, adding that “it’s been nagging at my mind for a great many years”.

This moment right here: He refused to entirely disavow his relationship with Epstein, saying it had “some seriously beneficial outcomes” that were unrelated to the accusations against them both. “Do I regret the fact that he has quite obviously conducted himself in a manner unbecoming? Yes,” he said. After interviewer Emily Maitlis challenged him, describing Epstein as a sex offender, the duke said: “Yeah, I’m sorry, I’m being polite.”

Can you even imagine the palace brain trust who okayed this mess? From a PR perspective – not to mention, from a legal/criminal perspective – this was an absolute disaster. Reportedly, the Queen is “aware” that Andrew did the interview and he spoke to her ahead of time. This is how they do “damage control” – they send Andrew out to claim that he NEVER sweats (until recently) and he would never buy an underage girl a drink because he doesn’t pay for drinks and he would never pose with a trafficked girl on the second floor of Maxwell’s home, and he’s never been to the second floor and that’s why he knew where the photo was posed. Trafficking, abusing and raping children is “a manner unbecoming” and oh well, Epstein sure had a convenient townhome but he never saw anything there, or on the island or in Florida and it was all just business, nevermind all of the teenage girls giving him foot rubs which definitely never happened, so stop asking, you’re affecting his poor mental health. MY GOD.

I was going to put the vital clips here, but the BBC released the entire interview on YouTube, so just sit here in horror as you watch it.