Us Weekly: Cameron Diaz ‘had been trying to have a baby for a long time’ 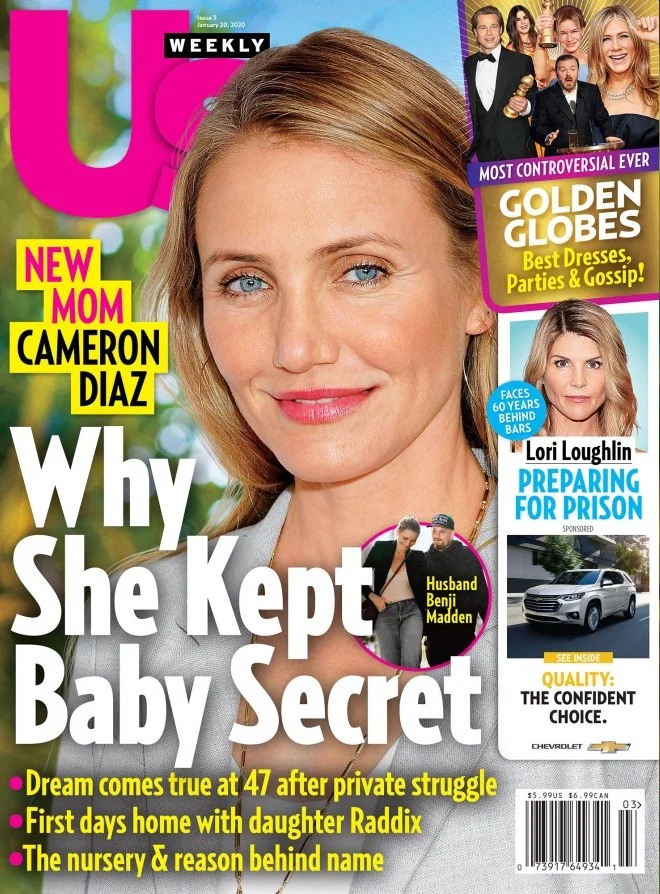 Cameron Diaz and Benji Madden announced on Instagram last Fridaythat they had welcomed their first child, daughter Raddix. I was genuinely happy for them, as I had assumed that they were trying for a baby for a few years at least. I’m not trying to invade another woman’s womb, but I’m just saying… it felt like “trying for a baby” was one of many reasons why Cameron retired from acting five years ago. Well, Us Weekly put Cameron’s baby stuff on this week’s cover. There’s not any breaking news here, although Us Weekly claims definitively that they used a surrogate. I kind of wonder if they used a gestational carrier though (which would mean it was Cameron’s egg).

Proud parents. Cameron Diaz and Benji Madden have “adapted beautifully” after welcoming daughter Raddix via surrogate, a source reveals exclusively in the new issue of Us Weekly.

“Cameron and Benji had been trying to have a baby for a long time,” the insider explains. “There were disappointments along the way, so it was difficult and stressful at times. But they say it was a price worth paying. They feel beyond blessed.”

The 47-year-old actress and the 40-year-old Good Charlotte rocker announced the birth of their daughter on Friday, January 3. “We are so happy, blessed and grateful to begin this new decade by announcing the birth of our daughter, Raddix Madden,” the couple said in a statement via Instagram. “She has completely captured our hearts and completed our family.”

According to the source, Benji’s brother, Joel Madden, and wife Nicole Richie are “thrilled” to see the couple in such a “wonderful place.”

“Nicole and Joel have been so great, and they’ve offered to help in any way they can, both now and moving forward,” the source tells Us. “They’re going to be a huge part of Raddix’s life — the plan is to really integrate the two families so all the kids can grow up together and be one big, happy family.”

Richie, 38, and Joel, 40, are the ones who introduced Diaz and Benji back in 2014. The Simple Life alum and the musician are parents of daughter Harlow, 11, and son Sparrow, 10. “They’re so great with kids and will be incredibly fun and loving parents Cameron’s very close with all her nieces and nephews,” the source tells Us. “They all adore her and are excited to see her as a mom with a baby of her own.”

It’s still so weird to me that Nicole Richie and Cameron Diaz are… sisters-in-law. It’s odd. Anyway, yeah, I do think Cameron and Benji were trying for a while and they luckily had the means and the time to explore different options. And of course the cousins will grow up together – Benji and Joel hang out a lot and their kids will spend time together.

15 Responses to “Us Weekly: Cameron Diaz ‘had been trying to have a baby for a long time’”