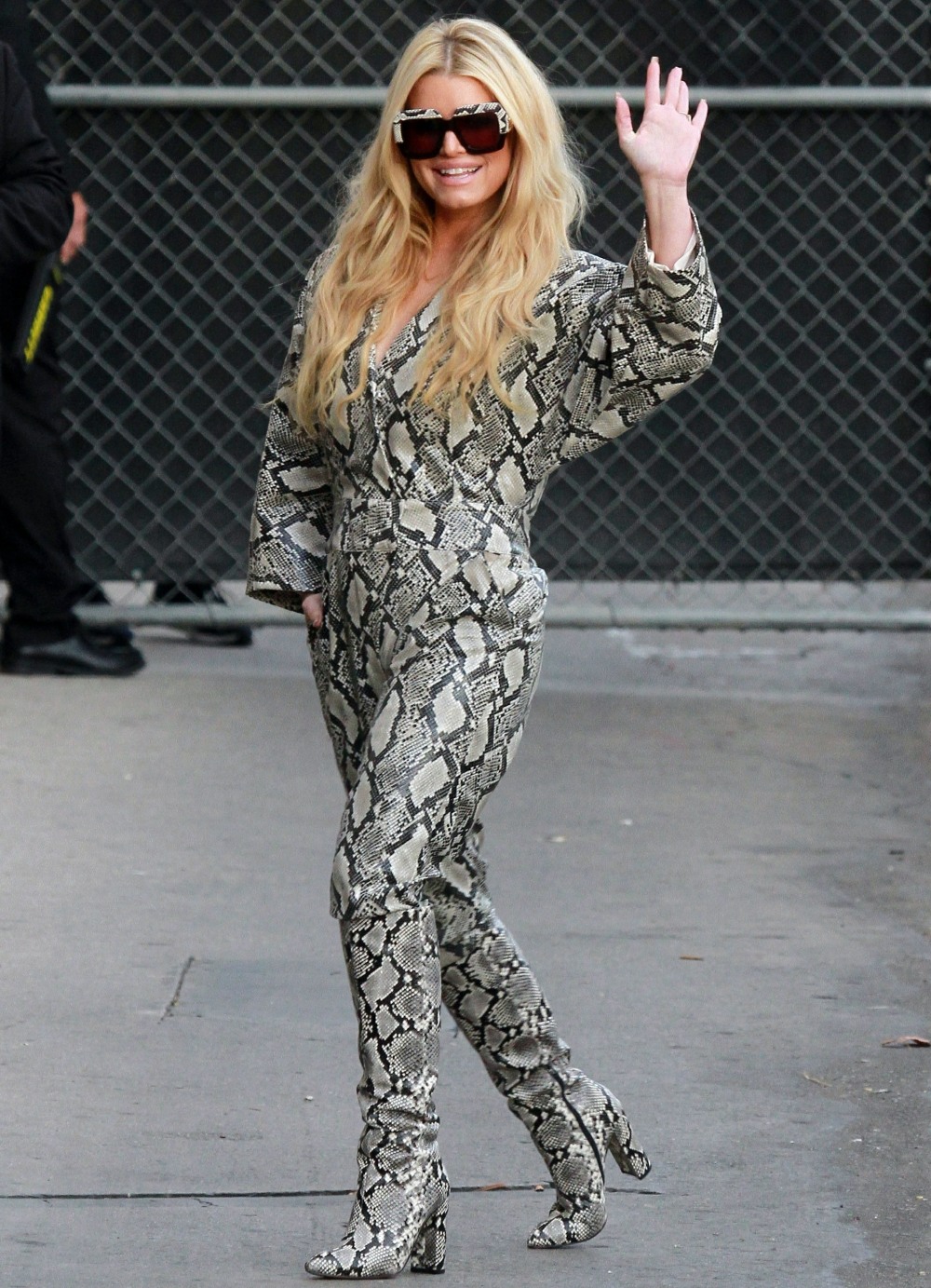 A large chunk of the advanced promotion for Jessica Simpson’s memoir was the story of how she stopped drinking and stopped taking pills. Jessica has been clean and sober now for more than two years. In those two years of sobriety, I guess I haven’t been paying much attention to her TV interviews? I was actually sort of shocked when I sat down to watch Jessica’s interview on Jimmy Kimmel Live. Even two years sober, Jessica still sound like she’s drunk as hell. It’s just the way she speaks, and I also think she’s getting lip injections, which affect the way she enunciates too. But lordy, she absolutely sounds hammered here. Also: she tells about ten bonkers stories.

The Chuck Norris School of Acting… wow. But there’s also this horrendous story about the time Jessica kissed Justin Timberlake and he was just as skeevy as you could imagine:

On Wednesday, Jessica Simpson walked Jimmy Kimmel through her new memoir Open Book on Jimmy Kimmel Live, where she revealed that ex Nick Lachey wasn’t the only famous boybander she’s kissed. While reminiscing about her failed Mickey Mouse Club audition in the ’90s and recruiting Chuck Norris to help improve her acting skills, the “With You” singer shared that she had a brief fling with Justin Timberlake after she and the 98 Degrees frontman divorced in 2006.

“After divorce and he was out of a relationship, he was, like, over at my house, we shared a nostalgic kiss, but I thought, ‘Oh, this is interesting,’” she recalled. “And he took his phone out and started typing. And I was like, ‘Okay, I hope that’s not, like, another girl. Like, did I, like, stick my tongue out too much or, you know?’”

Just wait, the story gets even better. “But apparently him and Ryan Gosling had a bet on who would kiss me first when they were 12-years-old,” she continued. “And so, he texted Ryan and said he won the bet. And I was like, ‘Oh, okay. Um…So we don’t kiss again. That’s done.’”

But, if 12-year-old Simpson had her way, she would have chosen the La La Land actor instead. “Ryan was the one that I was, like…when I was 12, I was, like, ‘This guy is so cool and he’s from Canada,” she dished. “I don’t know where that is on the map, but I really think that that’s amazing.’ And there was something so cute about him. But Justin won the bet.”

I mean, “boys will be boys” and I’m not going to get indignant about two twelve year old boys making a bet about who would kiss the pretty blonde girl first. But the fact that Justin held on to that sh-t into adulthood and that he TEXTED RYAN after he kissed Jessica? That’s appalling. The Chuck Norris School of Acting is appalling too, but for different reasons.

Also appalling? Jessica literally wore this TO Jimmy Kimmel’s studio. Like, this is her everyday outfit and she changed for the show. LMAO. Jessica is so much fun. 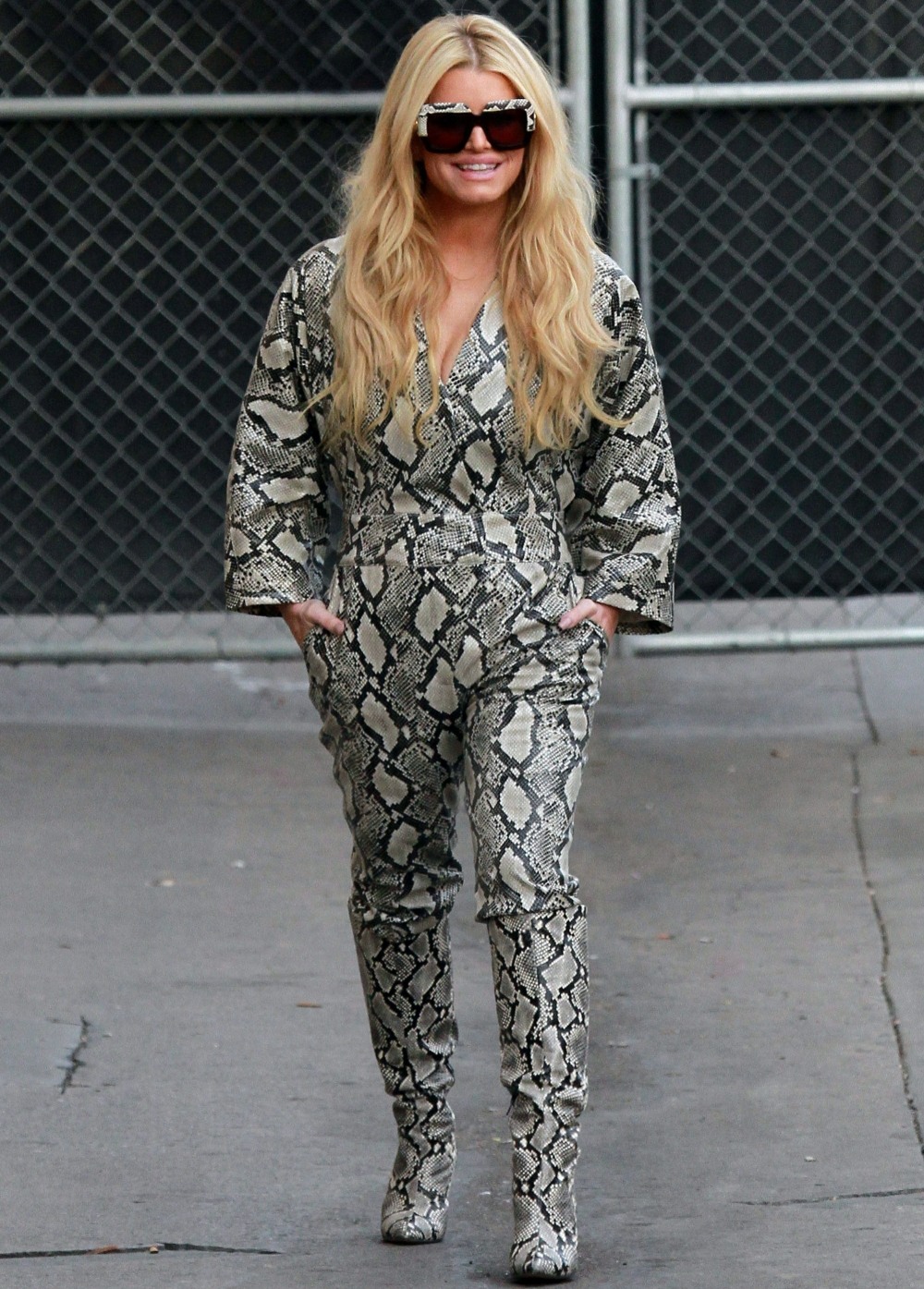