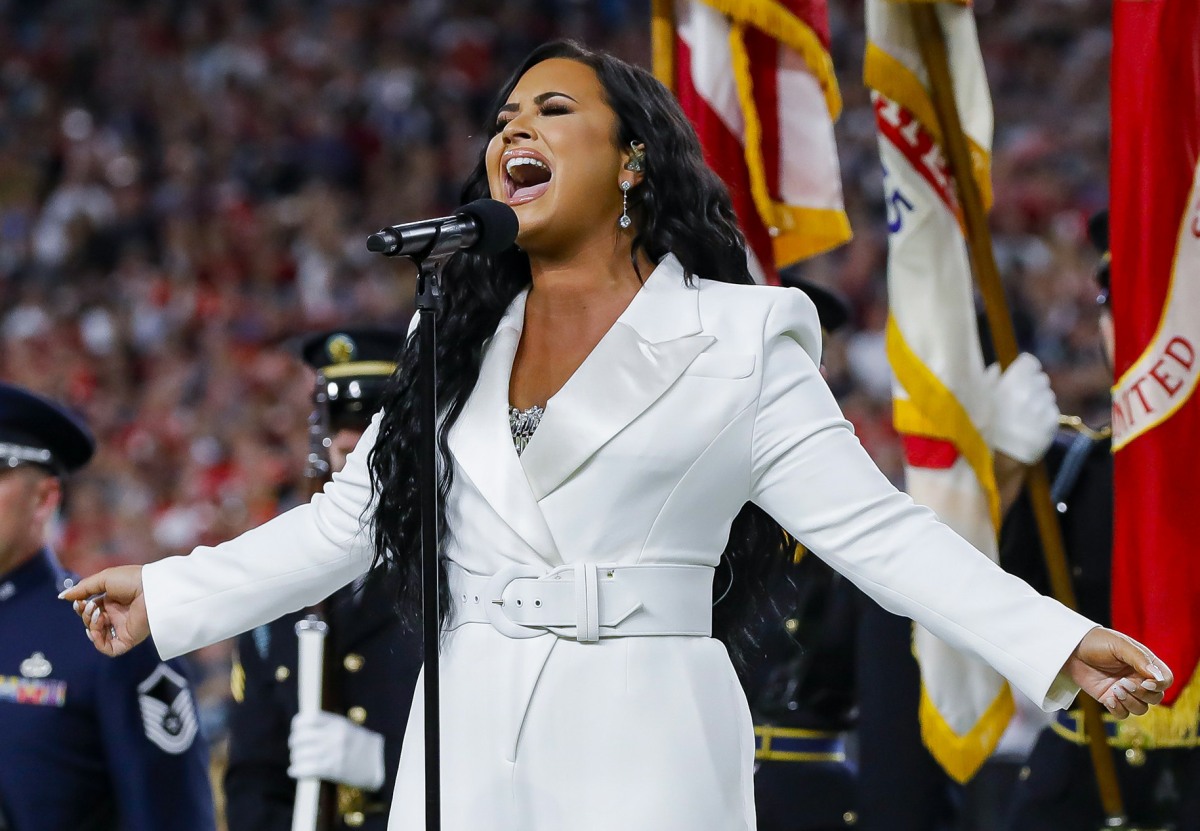 Demi Lovato sang the National Anthem ahead of the Super Bowl. The artists selected for this gig have a different set of criteria than the ones selected for the Halftime show, have you noticed that? They’ll hire people not known for the strength of their voices for the Halftime show, but the NFL hires people (usually women) who can really SING for the National Anthem. I get that. It would disrespectful to a difficult-to-sing song to hire someone who is just going to phone it in. And Demi IS known for having a strong voice. So… how did she do?

I think she did great! A touch nervous at the start, but she warmed up quickly and hit all the notes. Unfortunately, the singing of anthem is not just about the song these days – of course there were cutaway to all of the football players, and it appeared as if all of them stood for the anthem, and some even sang along. No protests, no kneeling… from the football players. Beyonce and Jay-Z were in attendance at the Super Bowl though, and they didn’t stand for the anthem:

Here’s a tweet from a MAGA dude slamming Beyonce & Jay-Z for being “unpatriotic scum.”

WATCH: While thousands of proud Americans stood in-allegiance for the National Anthem, Jay-Z and Beyonce sat in silence.

America has no place for unpatriotic scum like these two.

Kick them and Colin Kaepernick right down to Mexico!#fixit pic.twitter.com/4JlEAKhd4i

If you remember, Jay-Z signed a deal with the NFL last year– he will become part-owner of an NFL team, he will help select Halftime performers (and possibly help produce the Halftime show), and the NFL agreed to put money and time into the Inspire Change initiative, which is supposed to be the NFL’s way of handling player protests and at least giving mouth service to the idea of racial justice. Jay was widely criticized for selling out the African-American community for the deal. And then… he turns up at the Super Bowl and he and Beyonce don’t stand for the anthem? I mean, as an American, I don’t give a crap if Bey and Jay sit or kneel or stand. It truly does not matter, and I’ve always found this conversation to be so racialized, and involving a crazy amount of dog-whistles and respectability-politics. So… I have no opinion here. I’m going to sit back and listen.