Drake’s enormous Toronto mansion is excessive luxury: love it or hate it? 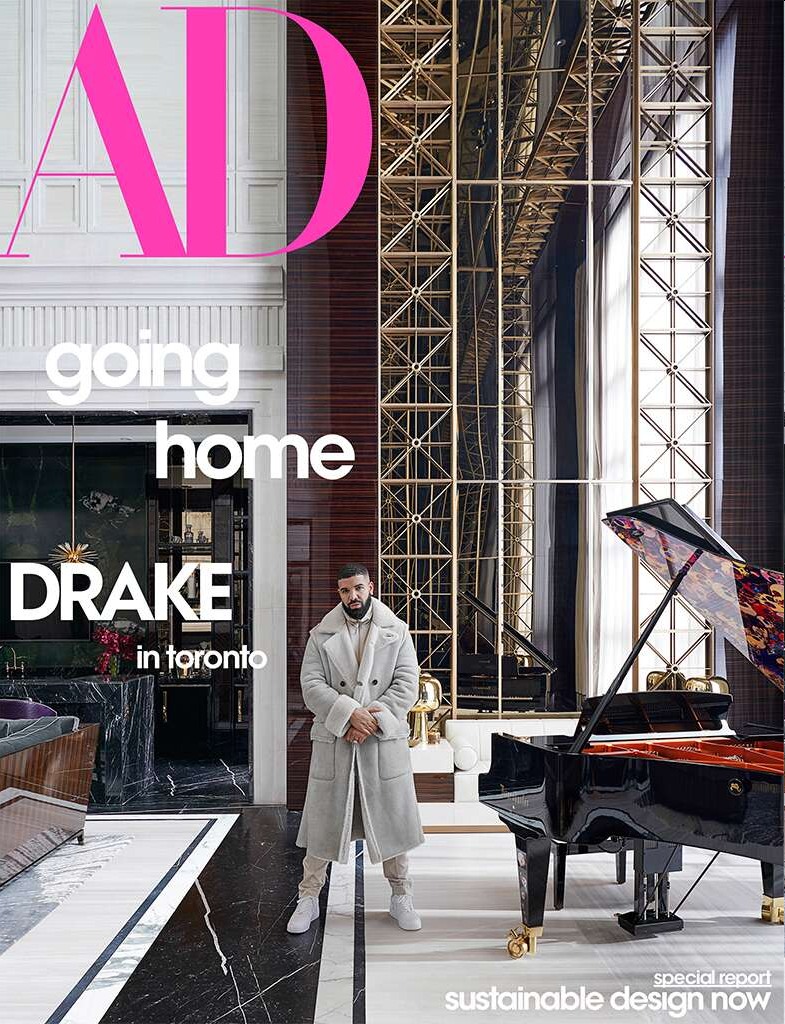 Architectural Digest has been doing back-to-back-to-back celebrity-home covers, right? It’s crazy, all of the excess and bad design styles. The only recent celebrity home which actually seemed like a realistic (and gorgeous) space was Dakota Johnson’s beautiful home. Drake’s Toronto mansion is not realistic, nor does it seem particular “liveable,” in the sense of “can you imagine yourself curling up and reading a book in the living room, or heating up a can of soup in the kitchen?” I answered “no” to both of those questions. It’s too big, the spaces are too cavernous and it would feel like you were living in a mall. Not everyone has to live in a “liveable” home though – Drake has obviously built this space for entertaining large groups, for parties and for people to see what he’s collected and how crazy and expensive he’s made the place. You can see the full AD piece here. Some highlights from the interview:

Details about the home, called the Embassy: It’s a 50,000-foot Art Deco home with “a recording studio, an NBA regulation-size indoor basketball court, a 21-square-foot pyramidal skylight, an indoor swimming pool and a special room just for the rapper’s awards. The entrance hall contains two Kaws sculptures aligning the sides of the black and white Nero Marquina marble floor. It also features a custom bronze and marble Ferris Rafauli chandelier.”

He wanted a place built to last: “Because I was building it in my hometown, I wanted the structure to stand firm for 100 years. I wanted it to have a monumental scale and feel. “It will be one of the things I leave behind, so it had to be timeless and strong.”

His 3,200 square-foot bedroom, with 1,100 square feet of covered terraces. “The bedroom is where I come to decompress from the world at the end of the night and where I open my eyes to seize the day. The bed lets you float, the shower lets you escape and gather your thoughts, and the closet makes you want to talk to yourself while you’re getting dressed.”

This AD cover was timed for the release of his video for Toosie Slide – all of the interior shots in the video are in Drake’s home. It’s like he made his own AD video? While I’m not crazy about all of the marble in his kitchen, I bet his private chef loves it?

“Because I was building it in my hometown, I wanted the structure to stand firm for 100 years. It will be one of the things I leave behind, so it had to be timeless and strong.”

75 Responses to “Drake’s enormous Toronto mansion is excessive luxury: love it or hate it?”