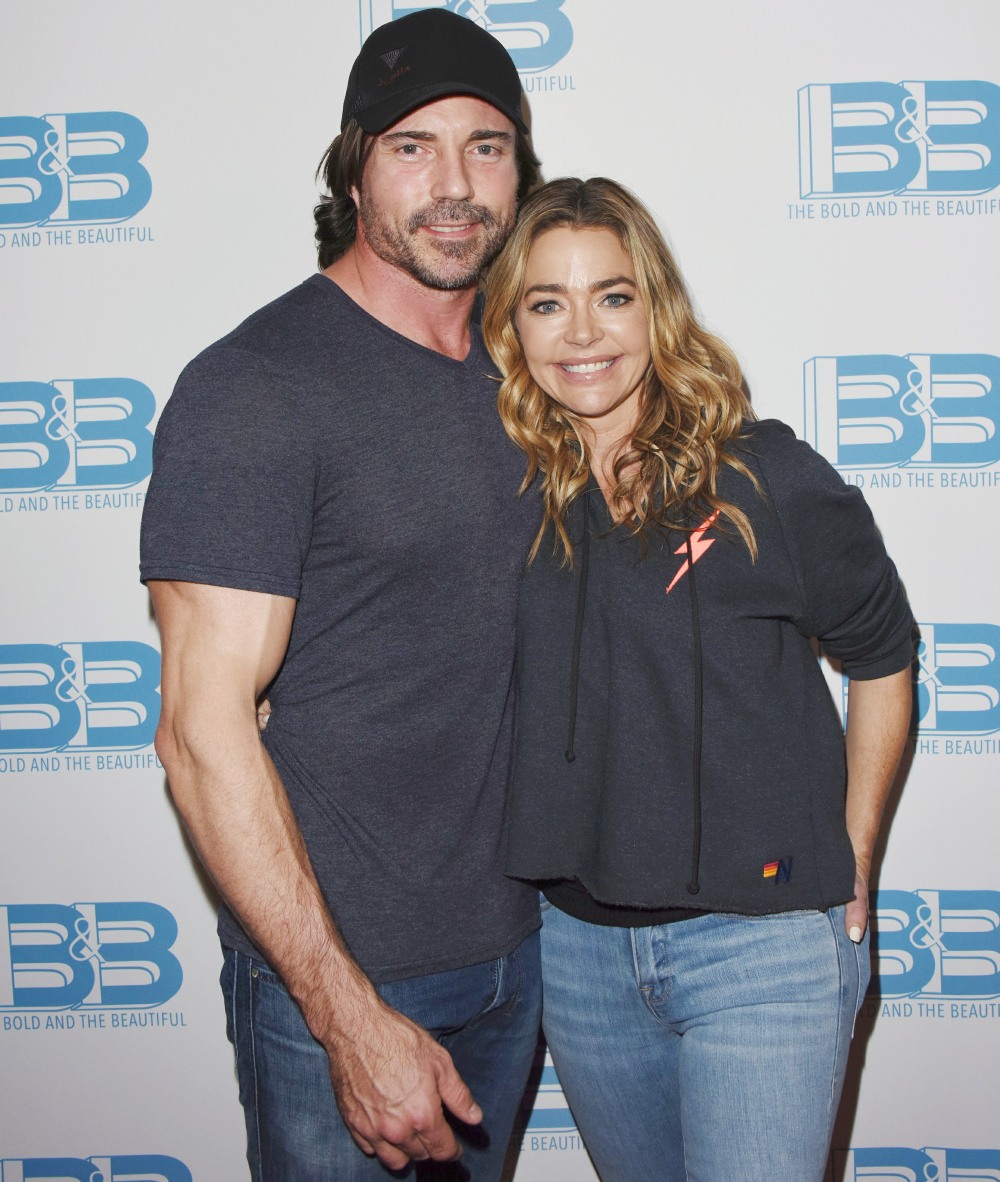 All this time, I honestly thought Denise Richards’ husband Aaron Phypers was just some vague dude-bro and the real gossip was whatever happened between Denise and Brandi Glanville. How naive I was. Apparently, all of the bonkers sh-t went down on last night’s episode of Real Housewives of Beverly Hills. There was a dinner party at Kyle Richards’ house and there was a conversation about what Aaron Phypers does for a living. As it turns out… well, this bitch is crazy. Phypers “runs” a “holistic healing center” in Malibu, but it’s not just about Goop-esque pseudoscience of “stickers cure cancer.” No. Phypers believes that he has regeneration powers because of his exposure to nuclear power (??) AND that he’s being followed because he knows too much. I just…

Kyle Richards asked Denise’s husband Aaron Phypers to explain his profession to the group. “Denise’s husband, what Aaron does is something that’s more, I want to say cutting-edge. Even though people who know who have been around for a long time like … Yolanda Hadid … went to Aaron. And what he does is very interesting. And what you do is really amazing,” said Kyle, 51. “Can you tell us a little about that?”

Aaron, who is also an actor and wed Denise in September 2018, tried to explain his work. “Everything you’ve been taught about how diseases process and stuff works is not true,” started Aaron, who paused before admitting, “I have to be careful.” Speaking in a quieter tone, Denise, 49, reminded him, “We already have people following us, be careful.”

“Let me just —” said Aaron, as Denise told him, “I know, but be careful how you say all this.” He proceeded to cautiously explain. “I have to be careful.”

“Age of 12 I was living next to the largest nuclear facility in North America. I watched everybody die of cancer. I couldn’t understand why we could split an atom with sound and cause a nuclear explosion,” claimed Aaron, 47. “If you look at an atom, there’s lots of space, right? Electron, proton, neutron, whatever. There’s a lot of space, space, it’s empty space, right? 99.9 percent is space, but it’s oscillating at a frequency that appears to be real in our reality. Does that make sense? Traditional isn’t traditional. It’s allopathic. And allopathic, it means alternative medicine. Look it up. It’s all a measurement of the electromagnetic spectrum frequency. I break down stuff so you can all heal you — I don’t heal anybody, by the way. I remove blocks, discord, information.”

Aaron claimed, “I ruptured my Achilles tendon. I regrew it in two months no surgery. How’s that possible?” When Garcelle, 53, asked, “No surgery, is that what you’re saying? Without surgery?” Aaron confirmed, “zero.” Aaron continued, “There’s cancer in every one of you right now. Cancer happens all the time.”

At that, Denise alleged that she and Aaron are being followed. “If we end up off of Mulholland [Drive], you know why,” said Denise, referencing a popular winding road in Los Angeles.

“Look it up. It’s all a measurement of the electromagnetic spectrum frequency. I break down stuff so you can all heal you — I don’t heal anybody, by the way. I remove blocks, discord, information.” Gwyneth Paltrow just had an intense O. No, okay. I know a lot of people flirt with holistic, homeopathic and allopathic medicine and legitimately, there are some good ideas, concepts and natural medicines out there. But can we all come together and agree that THIS is not THAT? This is a man who sells crazy sh-t to rich people in Malibu. He sells the idea that people can regenerate body parts WITH THEIR MINDS. He probably is being followed. By the FBI because they’re investigating him for fraud.