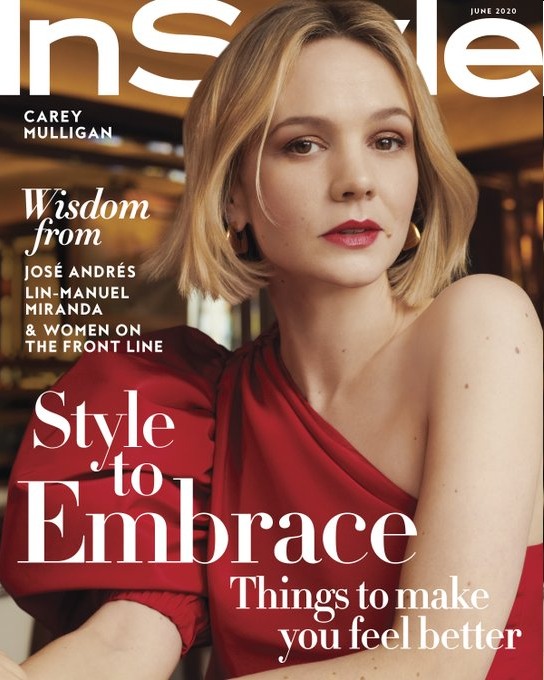 Carey Mulligan covers the June issue of InStyle to promote what would have been the release of Promising Young Woman, only the release date got pushed back (indefinitely, at the moment). Still, Carey managed to go to Paris to do the cover shoot just before Europe started going into lockdown. They cut it so close that Carey’s InStyle interview had to be done completely over the phone/Zoom. She’s currently locked down in Devon, England, where she owns a small farm with her husband Marcus Mumford. Her days are spent being a mom to two kids, Evelyn and Wilfred. You can read her InStyle profile here. Some highlights:

Going to Paris for the photoshoot before lockdown: “Well, at that point the train stations were still jammed, no one was wearing masks, and they weren’t advising people not to travel. But once I got to Paris, it felt odd. I brought one of my best friends, and we were like, “What if we get stuck here? What if someone has it in the hotel?” A week later, none of us would have gone. But I have to say, Paris was still fun. We stayed up late and watched Butch Cassidy and the Sundance Kid in French…. There were huge crowds of people there that day. Now, life has been shut down in that sense. Our ability to travel is curtailed, but we’re all still curious. I found it so cool how many monuments, zoos, and aquariums started livestreaming their exhibits.

Life in lockdown on her Devon farm: “We wake up early and do a Zoom class for school. It’s a toddler check-in, which is 20 kids all shouting over each other for 10 minutes. It’s hilarious. And then we do some schoolwork. My favorite game to play is filling a tray of toys with water and putting it in the freezer overnight, and then the kids get to “rescue” their toys. They love it and it takes hours.”

She makes casseroles: “Do you know the spicy broccoli salad at Sweetgreen? We’ve made our own version and have it probably four times a week. We’ve gone back into comfort mode and started to eat more casseroles. When the world is chaotic, you need warm food. Variations on casseroles. That will be my cookbook.”

Doing social media promo: “I looked like I didn’t even know what the Internet was. When I’m not in a press environment, I’m not massively clued in to what’s going on. And I think that helps it not consume my life.

She’s not a workaholic: “I don’t work that much. I’ve never done more than two films a year. And 23 days to make Promising Young Woman was not a massive commitment. It’ll get more complicated the older our family gets, but right now we’re quite mobile.

Being a young wife & mother: “I have the best job in the world, but I’ve learned that it isn’t the be-all and end-all. As someone who finds the public side of this quite intimidating, having a family has made me feel that if I wear a dress that people hate, or if I say something stupid, or if people don’t like a film I’ve been in, it doesn’t matter as much as it used to. It’s freeing, in a way.

Her beauty tricks: “I love facials. If I’m lucky and happen to be in America at the right time, I see [aesthetician] Joanna Czech. She’s incredible. In London I go to Pfeffer Sal. But for day-to-day, I just do a little concealer, curl my eyelashes, and use Glossier Boy Brow because I like to comb these bad boys out. I have also really fallen for baseball caps. I used to feel self-conscious about wearing one because I’m not American, but it’s a great way to navigate life without makeup.

I remember Emily Blunt (also British) talking about how British People Don’t Wear Baseball Caps and how John Krasinski will wander around England wearing his baseball cap and it, like, fills her with a deep shame. I’m not a baseball cap person either, but baseball caps are for everyone, every nationality! I think it’s funny as hell that Carey “feels self-conscious” about wearing baseball caps because she’s British. My lord. As for the rest of it… she sounds like she enjoys a more unplugged lifestyle on the farm. And the only casserole I’m into is a green bean-and-mushroom one without cheese.

Forget painting me like one of your french girls, photograph me like Carey Mulligan in our latest June issue. #linkinbio for more!

Cover and IG courtesy of InStyle.