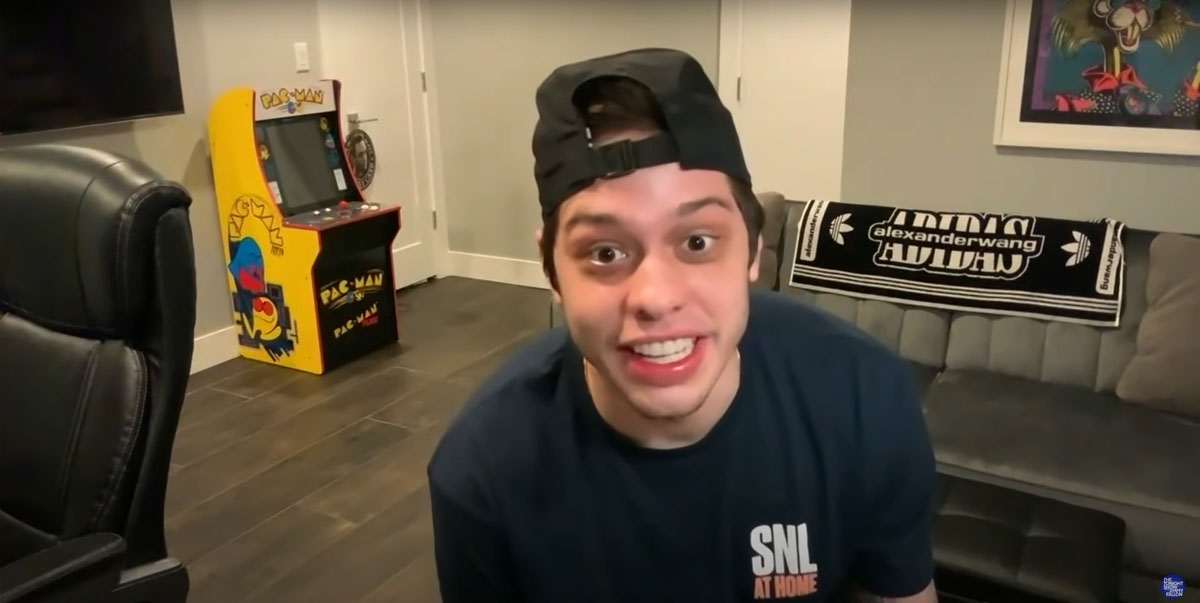 Pete Davidson has the new movie, The King of Staten Island, coming out June 12th on demand. A trailer dropped last week and it’s loosely based on Pete’s life, if he wasn’t a comedian/actor I guess. Pete lost his father, a fireman in New York City, during the terrorist attacks on 9/11. He currently lives in his mom’s basement, in a house he bought for her. I saw a video tour of his place recently and of course it’s all tricked out. He had an entourage of people over, with some friends playing video games and an honest-to-god tattoo artist giving tattoos to people in Pete’s basement apartment. Apparently that guy is part of Pete’s entourage, because he came with Pete to the King of Staten Island set and gave free tattoos to cast and crew. Pete told this story as part of his joint interview on The Tonight Show with director Judd Apatow. Pete tried to convince Judd to get a tattoo but he stood his ground and refused. Who pressures someone to get a damn tattoo? I guess I just answered that question, it’s Pete.

Random people brought pot to Pete’s house
Pete: Me and Judd released this video to [promote the movie]. I mentioned that I wasn’t doing drugs, that I was trying not to and then literally three hours later a lady rang my doorbell with a full bag of weed and gave it to my mom and said ‘I heard your son need this.’ So if you see this please do not do that because I will sell it. They came from Bayonne [NJ]. ‘We just came from Bayonne we saw the video, congrats on the movie.’

Pete unsuccessfully tried to get Judd to get a tattoo
Judd: We shot [the movie] last summer on Staten Island. The entire time Pete was trying to get me to get a tattoo. That was the most difficult part of the shoot, fighting off his attempts to tattoo me. I can’t get a tattoo because I’m so hairy you wouldn’t be able to see it in like two hours. I was always nervous that Pete would get tattoos during the shoot… and our continuity would go out the window.

Pete got tattoos during filming
Pete: I would get them after [key scenes]. They would [tell me] ‘today you’re shooting without a shirt.’

‘Is this the last day?’ and they’d [say yes] and I would fill up spots [with tattoos] that we were no longer required to have.

Judd: Last day of the shoot, Pete got his tattoo artist friend to come to set. Pete set up a station and said anybody on the crew could get a free tattoo.

Pete: We thought maybe three or four people would get it but the line was four blocks down. It was so weird to see this sweet lady from accounting come out with a giant dragon on her arm.

Judd said he’s been exercising a lot to get skinny but he also had a pint of Haagen Daz with him and was eating from that, which I can relate to so much. Most days the majority of my calories come from ice cream and that’s not an exaggeration. (See this post.) Judd and Pete first met on Train Wreck, Amy introduced Judd to Pete and said he was an up and coming comedian. Pete had one line in it, met Bill Hader (he played a doctor who was Amy’s character’s boyfriend), Hader introduced him to SNL head Lorne Michaels and the rest is history.

As for Pete, what you see is what you get. He’s a man-child who loves smoking pot, gets tattoos constantly and who lives in his mom’s basement. He dates famous women who find that charming until they realize it’s not an act and that it doesn’t go deeper than that. I’m glad he’s doing well now though and he did crack me up a few times.