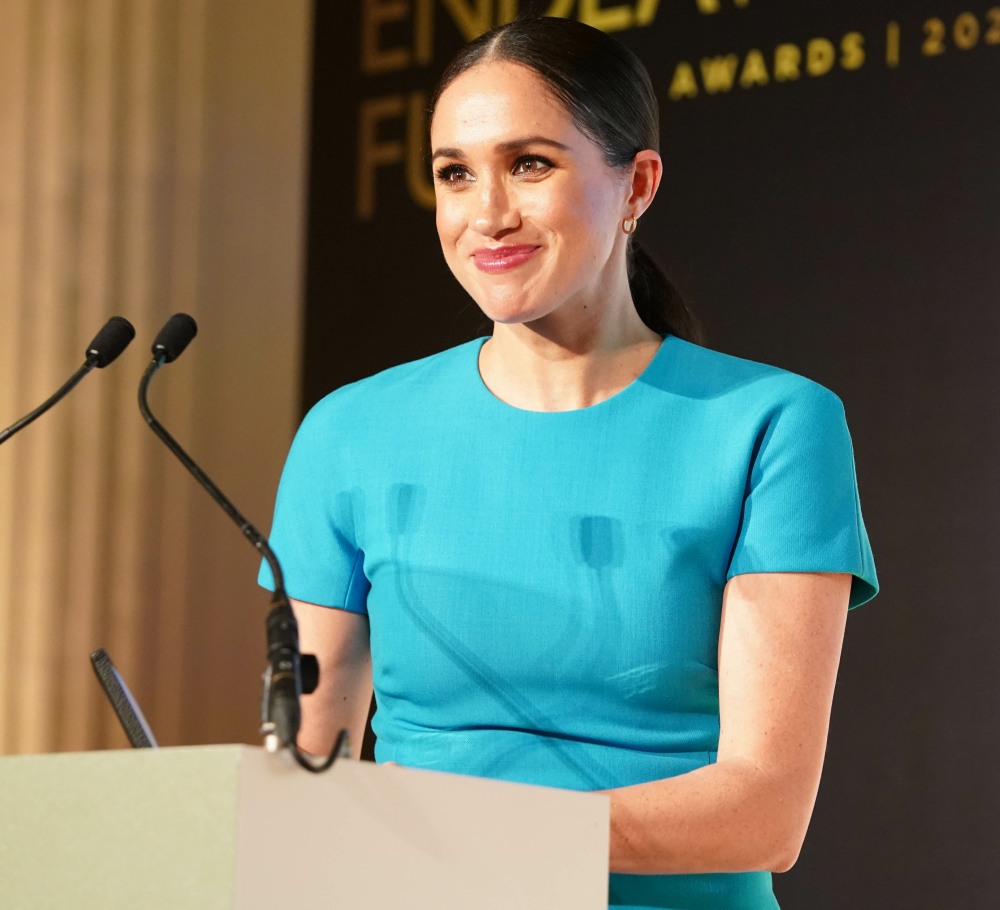 Katie Nicholl at Vanity Fair has a new piece about the Duchess of Sussex’s excellent video for the graduating class of her old high school in LA. Sidenote: I’m a little bit surprised that there hasn’t been an actual article devoted to how Meghan has been giving off pregnant vibes in this video, just like she gave off in the Archie birthday video. I suspect no one wants to focus on that right now, which… fair enough. Completely. So, back to Katie Nicholl. I wonder if Nichollhas any sources close to Meghan, or if Nicholl is just talking to randos at Kensington Palace. Who can say! You can read the full VF piece here. Some highlights:

Why Meghan did the speech: Sources close to the duchess say she has wanted to address the protests, but was unsure how to communicate a message of support and feared being attacked in the media. As a royal, she is expected to steer clear of politics; however, aides say this was a key issue for her and she has wanted to say something publicly for some time. “Like many people, Meghan has felt very raw about what has happened, this is a key issue for her. She knew whatever she said had to be communicated appropriately,” said a source. “There have been a lot of discussion. It wasn’t easy, but she was determined to say something. These are her words, her sentiments—it’s 100% her.”

The “old Meghan”: Another source who works closely with Meghan on her charity work said that the address reminded her of the “old Meghan.” “Listening to her was like hearing the old Meghan,” said the friend. “She sounds less restrained and more herself and much more how I remember her from when we first met, way back before she was a member of the royal family.”

God forbid she say something political: Before she was a duchess, she often used her platform to comment on social injustice and politics, speaking up about Brexit and attacking Donald Trump as “misogynistic” and “divisive.” However, when she married into the royal family, she was told she would have to put her political opinions to one side and channel her energy into charity work instead. Aides say she thought “long and hard” about how to address Floyd’s death at the hands of Minneapolis police, which has resulted in ongoing protests across the country. While Meghan has avoided politics, her message to the students of Immaculate Heart was clear.

Yes, racism only “plagues America”: Sources close to Meghan say she was excited to be part of the virtual graduation ceremony, but knew there was no way she could speak to a group of compassionate, service-driven young women without addressing George Floyd and the racism that plagues America.

Meghan wants to speak to the school again: As one of their most famous graduates, Meghan has told the school she would like to give more addresses to its pupils. The duchess has said her time at Immaculate Heart helped her find her voice and learn to lead. “She had planned to share a heartfelt congratulations to the class of 2020, who have worked so hard over the past four years, by sharing some words of support, encouragement, and offering some memories of her own time at the school,” said a spokesman. “However, in the video message she shared, she felt compelled to directly address and speak to these young women about what’s happening in this country right now around the killing of George Floyd—as well as what’s been happening over many, many years and many, many generations to countless other black Americans.”

I am not the person to write 6000 words on why “cops shouldn’t murder black people” is somehow a political issue with two sides. Nor am I qualified to try to explain why every single thing she said or didn’t say was viewed as a political act because of her skin, how all of this hand-wringing about “politics” is just another way to silence and erase Meghan or why certain petty white colonizers were ready to muzzle Meghan from the word go. I will say this – Meghan being an American and speaking about a social justice and racial justice movement which started in America makes it even easier for the Katie Nicholls of the world to continue to keep their heads in the sand about global racism.

Also, this was sent to me by a Twitter friend – Penny Junor was one of the hateful Bs who smeared Meghan for years, then smeared her some more post-Sussexit. In March, Junor was saying that Meghan was irrelevant. In June, suddenly the royal family can take credit for Meghan’s video. Huh.