Alex Trebek on his wife of 30 years: ‘she’s keeping me alive’ 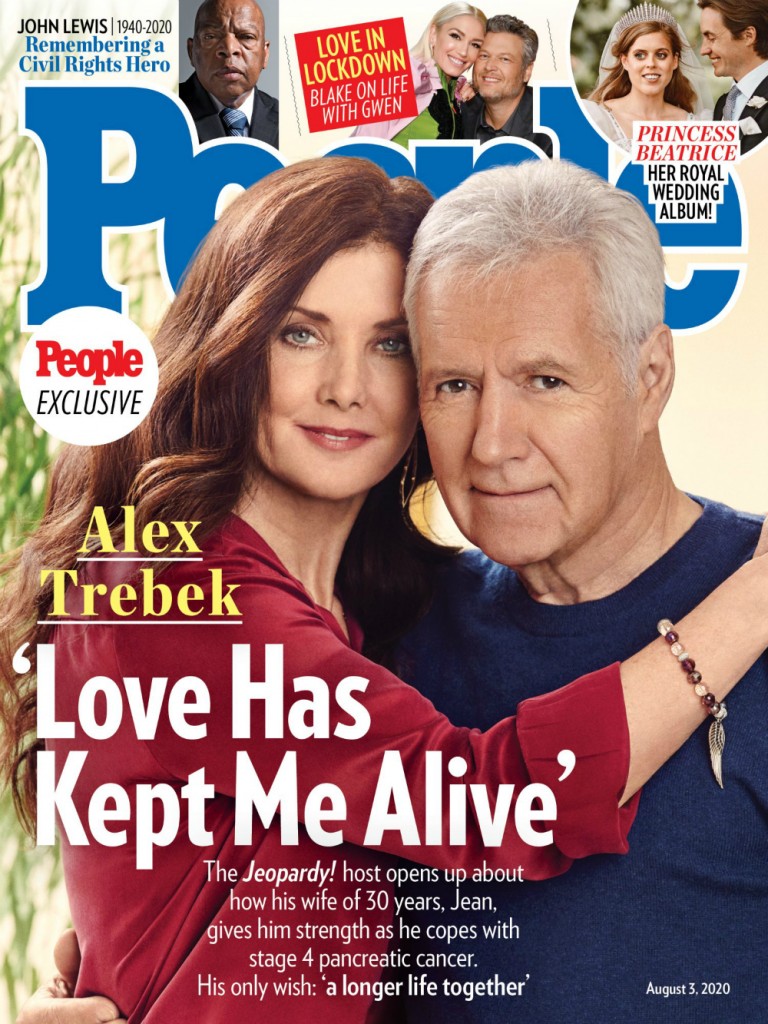 This current wave of press Alex Trebek is receiving makes me nervous. I know it’s because he’s promoting his memoir, The Answer Is… Reflections On My Life, but I feel like he’s gently preparing us for the worst. Alex, who has hosted Jeopardy for the past 36 years, made the admission in his book that if his current treatment for stage 4 pancreatic cancer does not work, he will no longer seek treatment. Pancreatic cancer does not have great survival numbers, it’s the bastard that robbed us of Patrick Swayze, Alan Rickman and Sally Ride. However, Alex said that he would have thrown in the towel long before now had it not been for his wife of 30 years, Jean. Jean, who is 24 years younger than Alex, met Alex when she was 23 and Alex was 47 and newly divorced. According to Alex, it was love at first sight.

Alex Trebek is getting personal about his deep love for his wife Jean.

In his new memoir, The Answer Is…Reflections On My Life (out now), the longtime Jeopardy! host opens up about how she’s been his rock through his stage 4 pancreatic cancer diagnosis.

“She’s kept me alive,” he tells PEOPLE in this week’s cover story, of how he’s been doing his best to stay strong for her since the March 2019 diagnosis. “If it weren’t for Jean, I’d have put myself out of this a long time ago.”

The couple, who just celebrated their 30th wedding anniversary, have an enviable love story, and Alex, 80, knows it. They met through a friend in 1988, when the Ontario-born Alex was 47 and had been hosting Jeopardy! for just four years. He was newly single after his divorce from his first wife, businesswoman Elaine Callei. Jean, then 23, was doing part-time bookkeeping for one of Alex’s friends.

“With Jean it just happened,” Alex writes in his book. “Sometimes you look at something, you look at someone, and you know. I mean, you’ve heard stories of people who meet and decide within half an hour; I knew this was going to be the person I’d end up with. With Jeanie that’s how it was. I wasn’t looking for love. But I recognized at a gut level that here was someone who was going to complete me as a human being.”

Alex and Jean have two children, Matthew, 29 and Emily, 26 (Alex also adopted Nicky, his first wife’s daughter). Since parents expect their children to outlive them anyway, I can see why Alex cited his wife over his adult kids as his reason to live longer. Any kind of ailment is a test on both partners in a relationship. It’s a blessing if you have someone who fights as hard as you do and, although I knew nothing about Jean before now, it sounds like she’s been Alex’s rock for over three decades. I can see why he wanted to eke out every day he could with her. But I also respect Alex’s decision to not pursue treatment. I can only imagine what he’s gone through.

I, as you know, don’t usually have an issue with age differences. I probably would have raised my eyebrow way-back-when the 47-year-old Alex was hitting the town with his 23-year-old bookkeeper, especially as Jean’s dad is only two years older than Alex. But they obviously had something and I’m glad they found each other, especially for the strength they’ve given each other during Alex’s battle. The only thing I do side-eye about the couple is that their favorite movie is Wuthering Heights and Jean gifted Alex with a framed version of Catherine’s line, “Whatever our souls are made of, yours and mine are the same.” I understand how on its own that could read nicely, but holy Christmas, if you’ve ever seen or read Wuthering Heights, any sentiment about Catherine and Heathcliff’s relationship should give you shivers. 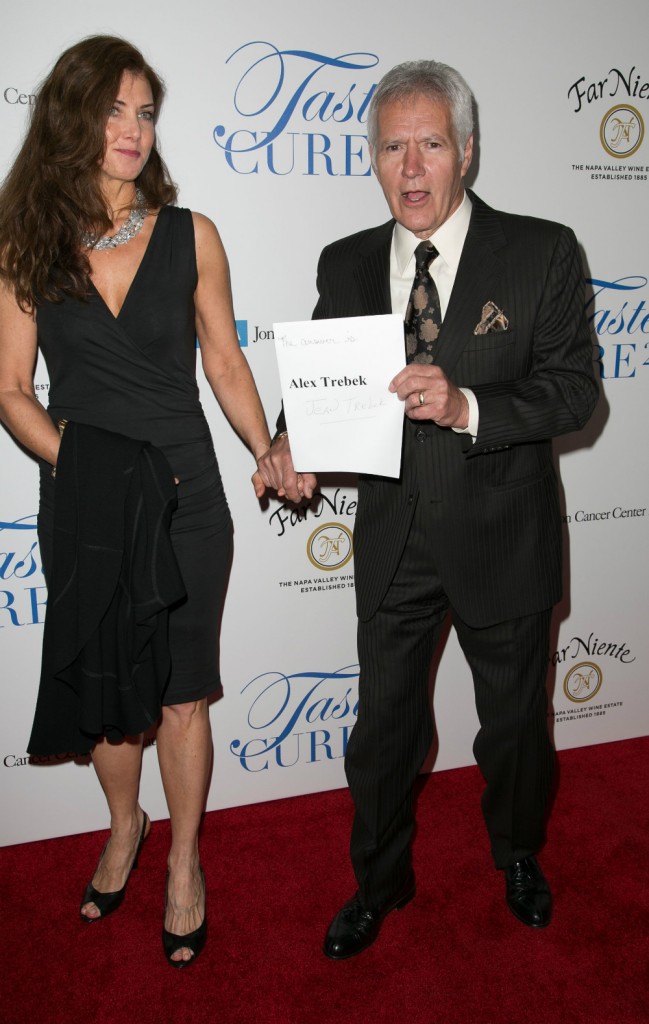 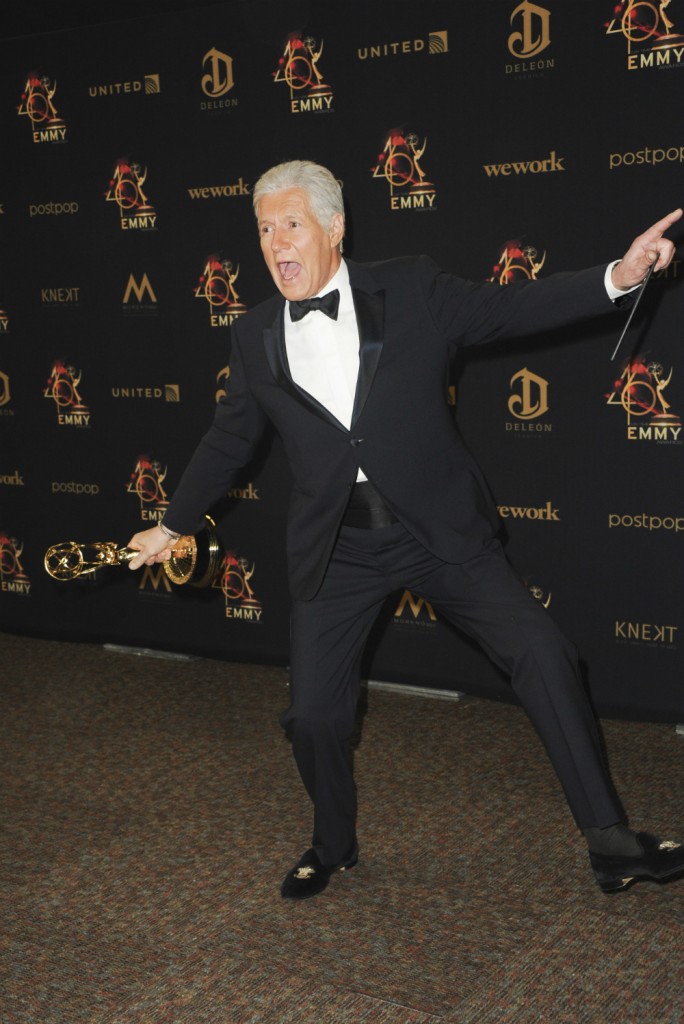 8 Responses to “Alex Trebek on his wife of 30 years: ‘she’s keeping me alive’”