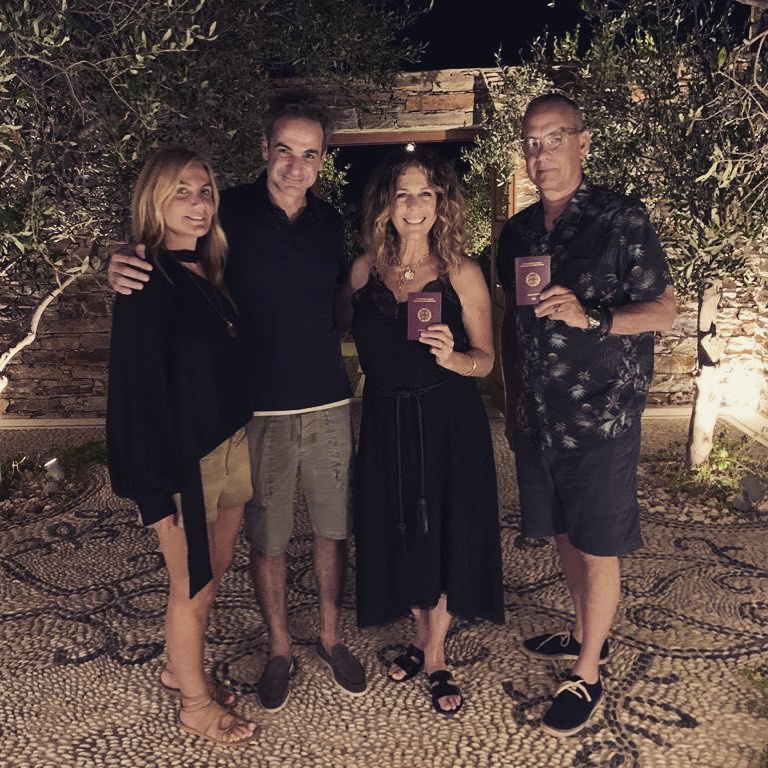 With the way America is going these days, many of us are daydreaming about escaping to a beautiful island surrounded by azure waters and good food. If you are a celebrity who does good things for a nation, you too could be granted dual citizenship.

As someone who is always trying to find ways to get another citizenship someplace where life is more simple, it warmed my cold jealous heart to see that Tom Hanks and his Greek-American wife Rita Wilson became official citizens of Greece last year. It was announced by Prime Minister Mitsotakis on his Instagram on Sunday.

I know you’re think it’s because they are privileged and rich. That may be true but they actually received this beautiful gift because of a good deed they did for Greece in 2018. Tom and Rita have been visiting Greece annually for over twenty years. They even bought property on the island of Antiparos. In 2018 they helped raise global awareness and relief after a deadly wildfire near Athens killed 100 people. CNN reports:

In a picture posted on social media by the country’s prime minister, the two proudly hold up their brand new passports.

The couple and their children became honorary Greek citizens last year — after officials highlighted Hanks’ role in helping raise awareness about the 2018 fires that devastated areas near Athens and claimed the lives of more than 100 people.

“Tom Hanks is a person who showed real interest in the people who suffered from the fire in Mati and promoted this issue in the global media,” Greek Interior Minister Takis Theodorikakos told CNN in a statement in December.

Wilson, who is part Greek, and Hanks, a Greek Orthodox convert, have often been spotted spending their vacations in Greece, where they also own property on the island of Antiparos.

The two have produced several films based on the Greek community and never shy away from sharing their admiration for the country and its people.

I can’t keep the jealousy in my heart for long because Tom and his wife continue to show the world what wonderful people they are. It’s also lovely to see that doing good deeds does not go unnoticed. And to be fair, they gave us My Big Fat Greek Wedding (Hanks’ company produced it) and that alone should have been rewarded with permanent citizenship in Greece.

I will continue to daydream about that expat, dual citizenship life while I plug away at whatever job I have. Maybe I’ll send Rita and Tom a letter asking them to adopt me. In the meantime, I’ll watch My Big Fat Greek Wedding on repeat while eating tzatziki and baklava.