George Clooney’s marriage to Amal is ‘really easy’: ‘We haven’t ever had an argument’ 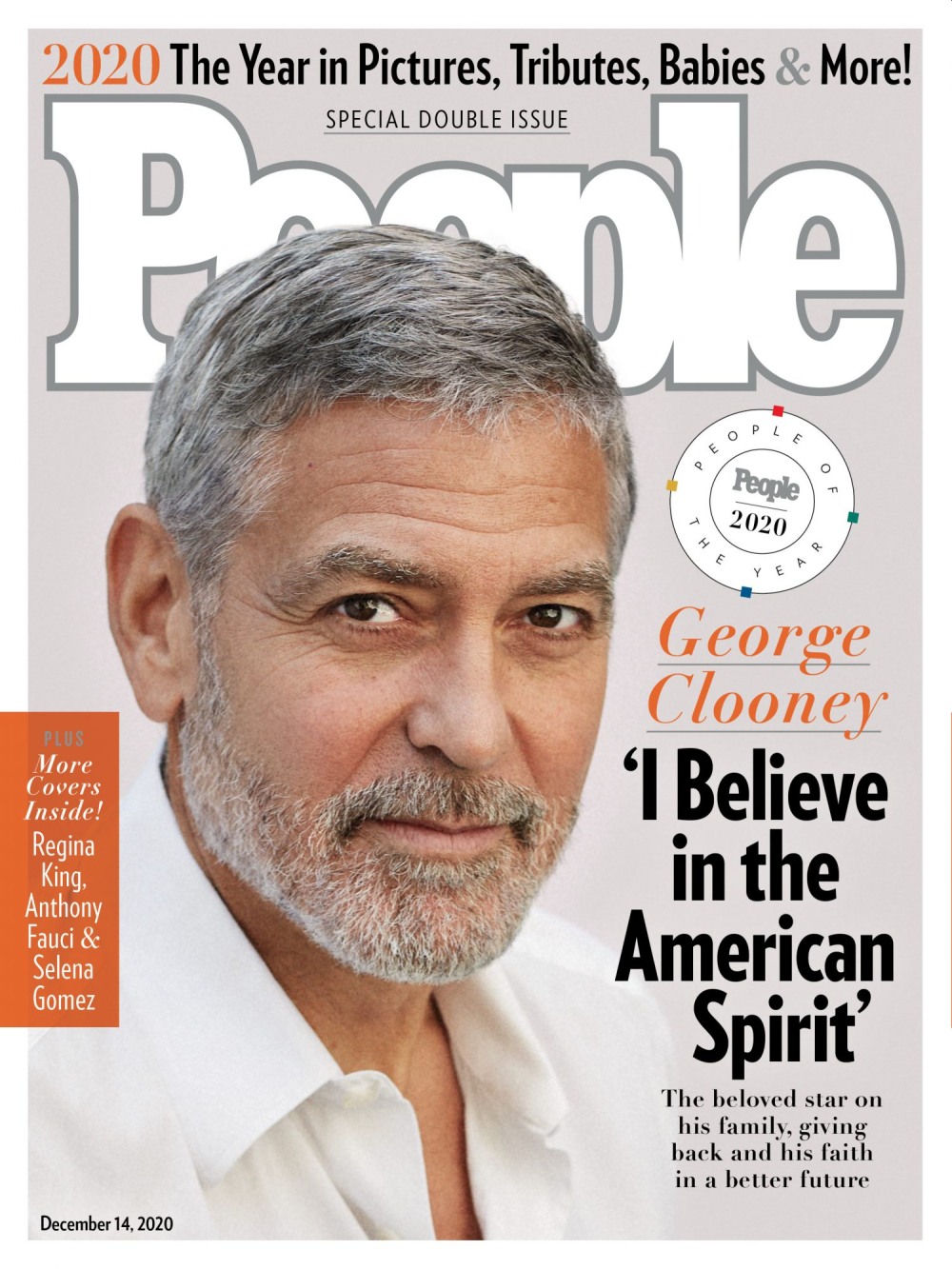 George Clooney is one of People Magazine’s People of the Year, and compared to the other cover subjects, George would NOT shut up. He went on and on and on. He’s been stuck at home with his wife and kids for months and it shows. It’s kind of sweet, actually. Dude truly loves his young children and his clever wife and he still seems surprised that his life turned out this way. George spoke about politics, nature vs nurture, his wife and tons more. Some highlights:

Growing up in the 1960s: “I grew up in a generation where all the people that mattered to us were being murdered, from Martin Luther King to Bobby and Jack Kennedy to Malcolm X and Medgar Evers, and all these things that counted were going on, with women’s rights, civil rights, the anti-Vietnam [war protests]. You had to be involved. My mother and father were involved, and we were [taught] it is your civic duty… I remember my father saying, ‘Don’t come back and look me in the eye unless you stand up to [bullies and racists].’ I’m glad to have been raised that way.”

He thinks America’s future is promising: “I’m always optimistic about this country. We fail a great deal, but I’ve been to so many countries that are really failed states, and they look to this country for leadership. We come up short a lot—race being our great original sin and clearly the one we’ve been the worst at—but we are in the constant process of trying to find a more perfect union… You can’t give up. I believe in the American spirit.” Clooney, who says he looks forward to “a return to civility” in 2021, remains determined to do his part. “I feel like I’ve been given a bit of a break, so I should be spending my time trying to give others a break.”

He’s lucky to have found Amal: “I feel very lucky in so many ways to have met her. We haven’t ever had an argument. You know, everybody’s been slammed together because of the coronavirus and a lot of friends’ relationships have been tested. For us, it’s been really easy. She succeeds in so many different ways and stands up for what she believes in. We didn’t fall in love because of our work, but it ended up being something unusual we [share]… We are really lucky and we know it.”

He hopes Ella & Alexander pick similar fights: He hopes they’ll “pick the same kind of fights. I hope that will be my wife’s and my legacy to our children. It just means standing up for things you believe in, standing up for equality. Who could be against equality?”

On the lockdown: “I haven’t been working as much as I had before we had the kids, so I had every intention of focusing on them [anyway], putting them to bed at night and stuff, so we didn’t need to be forced into that by a pandemic… I’m lucky because our kids are 3, so I don’t have to homeschool trigonometry. I can survive with just spending time with them.”

How his life has changed since becoming a dad. “Yeah, the times I used to be able to sit back and read a book, that’s done for a while. Like I was watching game six of the World Series, the winning game for the Dodgers, and my son had a dream that a dinosaur with fire was coming after him. It was just when Mookie Betts hit the home run, and I’m trying to comfort him. So things have changed a little bit.”

Watching his kids’ personalities develop: “It’s funny, they’re twins, but they’re very different… Ella is very shy around adults. We have a Saint Bernard puppy, Rosie, and she’s like 125 lbs. of sheer energy. She got stung by a bee, and now when we walk the dog and hikers go by, Ella kind of hides her face while Alexander walks right up and says, ‘Rosie got stung by a bee.’ He explains it to every single person… You learn so much with twins because you’re raising them both at the same time, born the same day, but you realize how little it has to do with you. They were the person they were going to be when they were born. Now all your hope is to just kind of guide them along in the right direction.”

He also told a gross story about teaching his kids the “Nutella in the diaper” prank and I can’t with that – Amal needs to shut that sh-t down. Sometimes I worry about Amal – stuck in LA with two children and a husband who teaches their three-year-olds to put Nutella in their diapers. As for his hope that his kids turn out to be politically and socially engaged… maybe, but at least one of them will probably end up being a model-deejay. I remember Angelina Jolie saying something very similar to George’s comments on kids being who they are when they’re born. Perhaps it’s something particular with parents of twins? 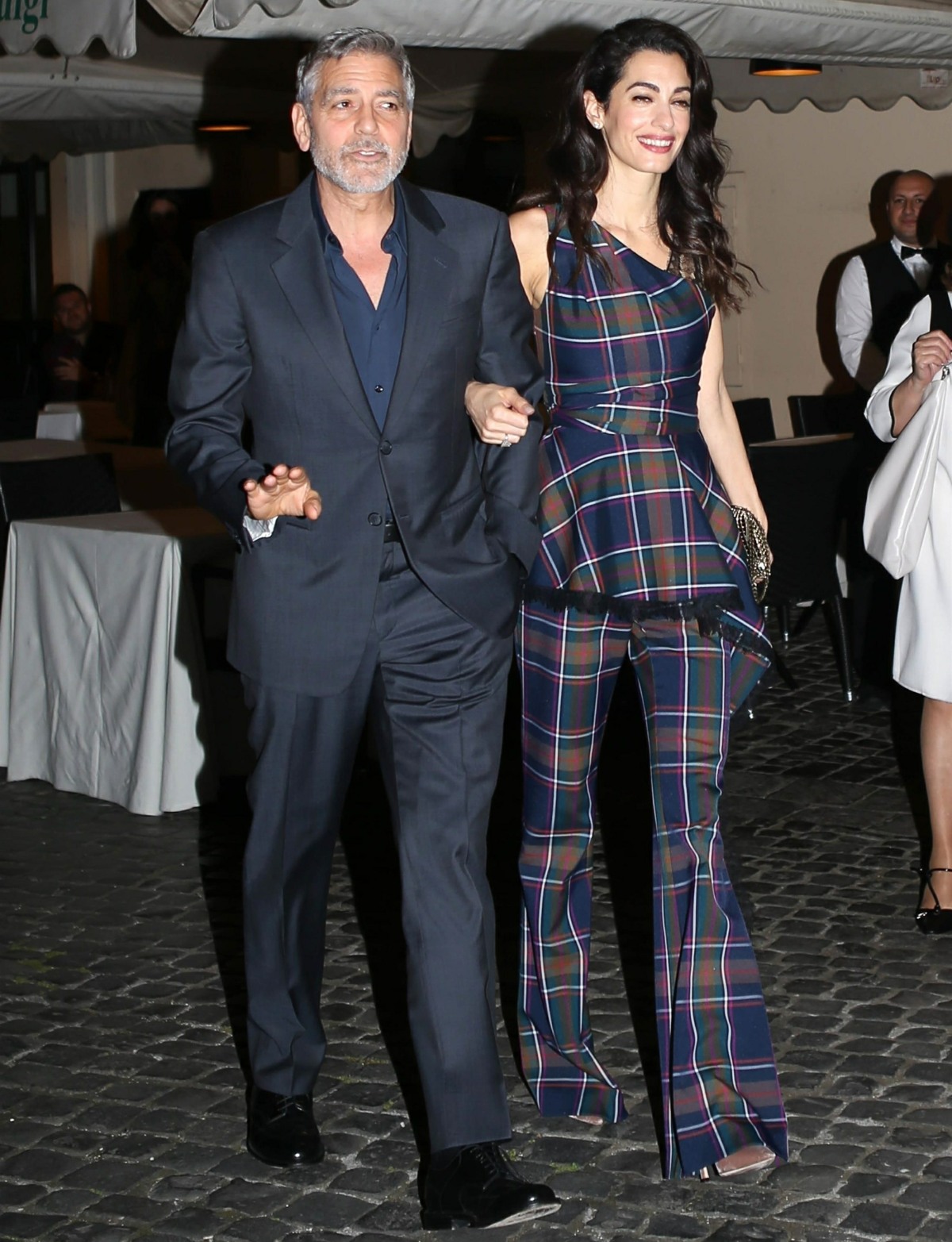 73 Responses to “George Clooney’s marriage to Amal is ‘really easy’: ‘We haven’t ever had an argument’”