Friends reunion director on response to Matthew Perry: ‘People can just be unkind’

The long-anticipated Friends reunion finally aired on HBO Max last Thursday. The show was met with mixed reviews. Most of the critics felt it was not cohesive enough and looked thrown together. Fans seemed to feel it hit the right notes. It seemed made for Friends fans. It combined several ideas, as if they tried to include what everyone at the table suggested. But since I am a big fan, I enjoyed it. I liked the stories, the reminiscing and the emotion. I also really enjoyed where the actors were today, like David Schwimmer coming full circle, getting over his Ross resentment and fully embracing his time as a Friend. And Courteney Cox remembering nothing except how much she loved everything. And Matt LeBlanc still being the playful punk.

Unfortunately, not everyone had positive takeaways on the actors. Much of the social media focus was on Matthew Perry’s appearance. Matthew, as most know, has struggled with an opioid addiction for years, as far back as when he was on the show. He’s sought help and relapsed a few times. He’s been sober for a while, even turning his home into a sober house for fellow addicts. In 2018, after several months of speculation that he’d relapsed once again due to his disheveled appearance and spacey disposition, Matthew cleared his name by disclosing he’d spent three months in the hospital for a severe gastrointestinal perforation. Post reunion, people are speculating on Matthew’s sobriety once again by noting how nad they thought he looked. Many on social media also lamented the absence of the razor-tongued Chandler during the reunion special. Fortunately, his Friends reunion director, Ben Winston, came to Matthew’s defense saying Matthew was great and people are just unkind.

The creative minds behind Friends and the beloved sitcom’s new HBO Max reunion special are defending star Matthew Perry, whose health status recently became a topic of concern for fans of the show.

“He was great. People can sometimes just be unkind. I wish they weren’t,” Winston told THR, referencing questions about Perry’s health from clips of him in the reunion.

“I loved working with him,” added Winston. “He’s a brilliantly funny man and I thought he had some great one-liners in the show. I felt just happy and lucky to be in his presence and directing him on something like this.”

“I talked to him. It was great seeing him again,” Bright said in a separate interview with the outlet. “And what people say is what people say. I don’t have any to say about that, except it was great to see him. And I think he’s very funny on the show.”

Bright added of Perry, “But yes, I think he’s OK. He seems stronger and better since the last time I saw him, and excited about going forward.”

I was upset with Matthew’s Raya’s escapades when they came out. I don’t get too worked up about age differences, although a 50-year-old man actively pursuing a 19-year-old steps right on the line for me. More that he’s been dating Molly Hurwitz, since 2018. They didn’t get engaged until last November, but I can’t believe Raya was on their list of approved apps for each other. I’m fine with that sort of thing being called out. But the appearance of a known drug addict in recovery should, perhaps, be treated with kinder judgement. I appreciate the creators and director speaking up for him on this point. I was glad to see that none of the Friends in particular tried to steal the spotlight during the show, which is how I saw Matthew’s more subdued manner while watching. I felt he looked his age, like most of them. The only thing that seemed really different were his veneers. I’m glad to hear he appeared healthy during the filming. I hope he is. I hope his creeping Raya behavior was because he’s having a mid-life crisis and nothing darker. 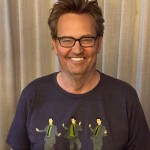 62 Responses to “Friends reunion director on response to Matthew Perry: ‘People can just be unkind’”