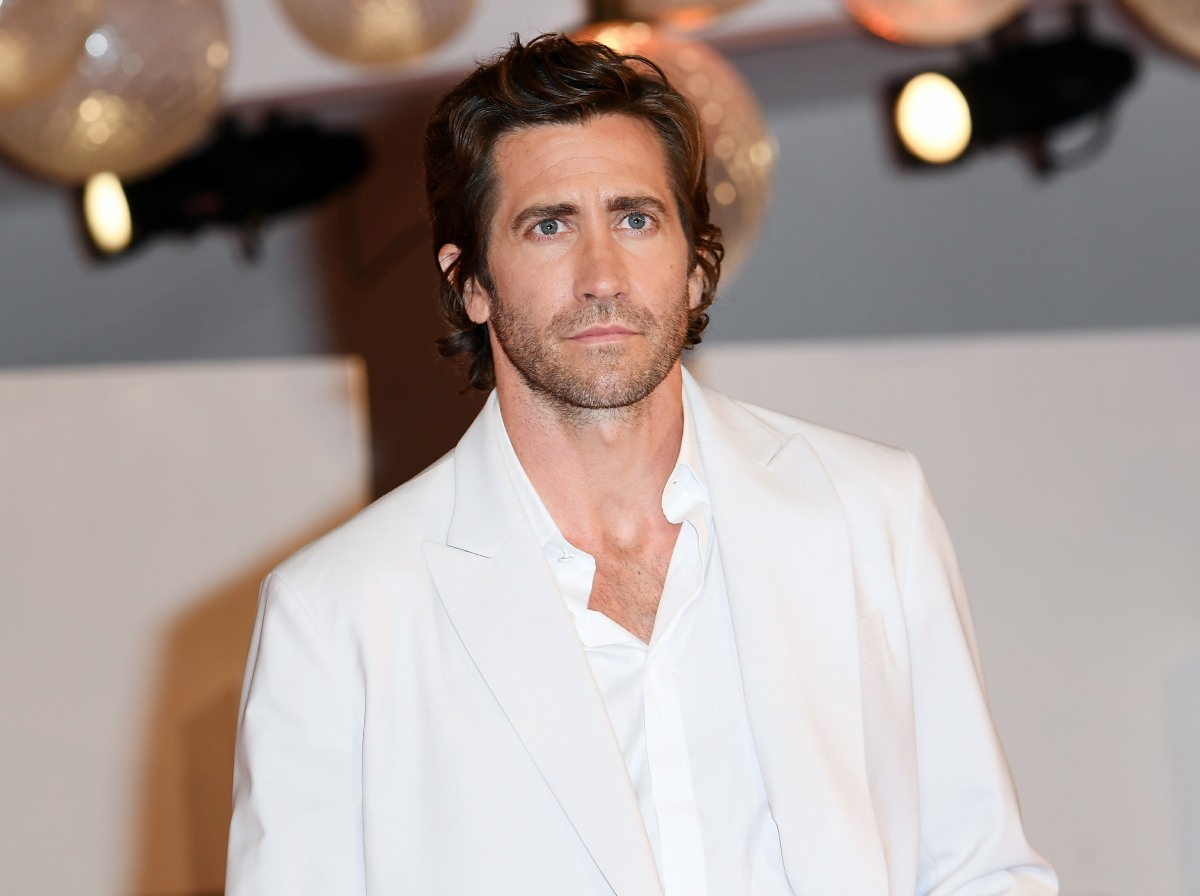 Jake Gyllenhaal went viral in early August. He did an interview with Vanity Fair to promote his work with Prada – he’s the face of Prada’s new cologne Luna Rossa Ocean. During the interview, Jake was asked about his shower ritual and his quote went viral. VF had just published the interview the night before, and when I posted this quote on Twitter, that became the jumping-off point for people to yell about how Jake is stank-ass. Again, here’s the full quote, in context:

VF: Is there anything revelatory about your shower ritual?
Gyllenhaal:
I always am baffled that loofahs come from nature. They feel like they’ve been made in a factory but, in fact, it’s just not true. Since I was young, it’s amazed me. More and more I find bathing to be less necessary, at times. I do believe, because Elvis Costello is wonderful, that good manners and bad breath get you nowhere. So I do that. But I do also think that there’s a whole world of not bathing that is also really helpful for skin maintenance, and we naturally clean ourselves.

Maybe it’s just my bias against Jake, but I find him humorless and unlikely to joke around, especially in interviews. He seems quite earnest, actually. So I took his comments as just Jake accidentally telling the truth, that he truly believes that people naturally clean ourselves, that bathing is less necessary for him. As Jake began promoting his latest film, The Guilty, he was asked about these comments and he now claims he was being sarcastic AND ironic. Hm.

Jake Gyllenhaal has clarified that he does shower following his previous comments claiming that he finds bathing to be “less necessary, at times”.

Asked about his hygiene routine over the weekend, he joked: “By the way, I [filmed] an independent film, of course I don’t shower. What are you writing about? Of course, we don’t have money for the showers. I think, by the way, anyone who’s used a trailer, has the shower ever really worked? They don’t work in trailers, the sinks barely do.”

Addressing his previous comments, the 40-year-old said: “I don’t know what it was, it was an answer to a question where I was being sarcastic and ironic and it has followed me around.”

The Donnie Darko star quipped: “Unfortunately I showered before I came here so I’m sorry about that.”

“It was an answer to a question where I was being sarcastic and ironic and it has followed me around…” It hasn’t even been two months since that interview was published! He makes it sound like people have been calling him stank-ass for years! As for the sarcasm and irony…? Maybe there was a tone in his VF interview which was lost in translation to print, but again… Jake comes across (to me) like a pretty humorless guy. It doesn’t read as sarcasm. It doesn’t read as “ironic.” It reads like a guy living inside his own stinky, dirty ass. Why would it have been so hard for him to be like “yeah, that sounded weird and I’m sorry, I definitely bathe regularly!”

These photos are from his appearance in Venice a few weeks ago. I swear to God, when I first saw them, I thought “wow, he really does not look like he’s bathed recently.” I bet that white suit was SOILED. 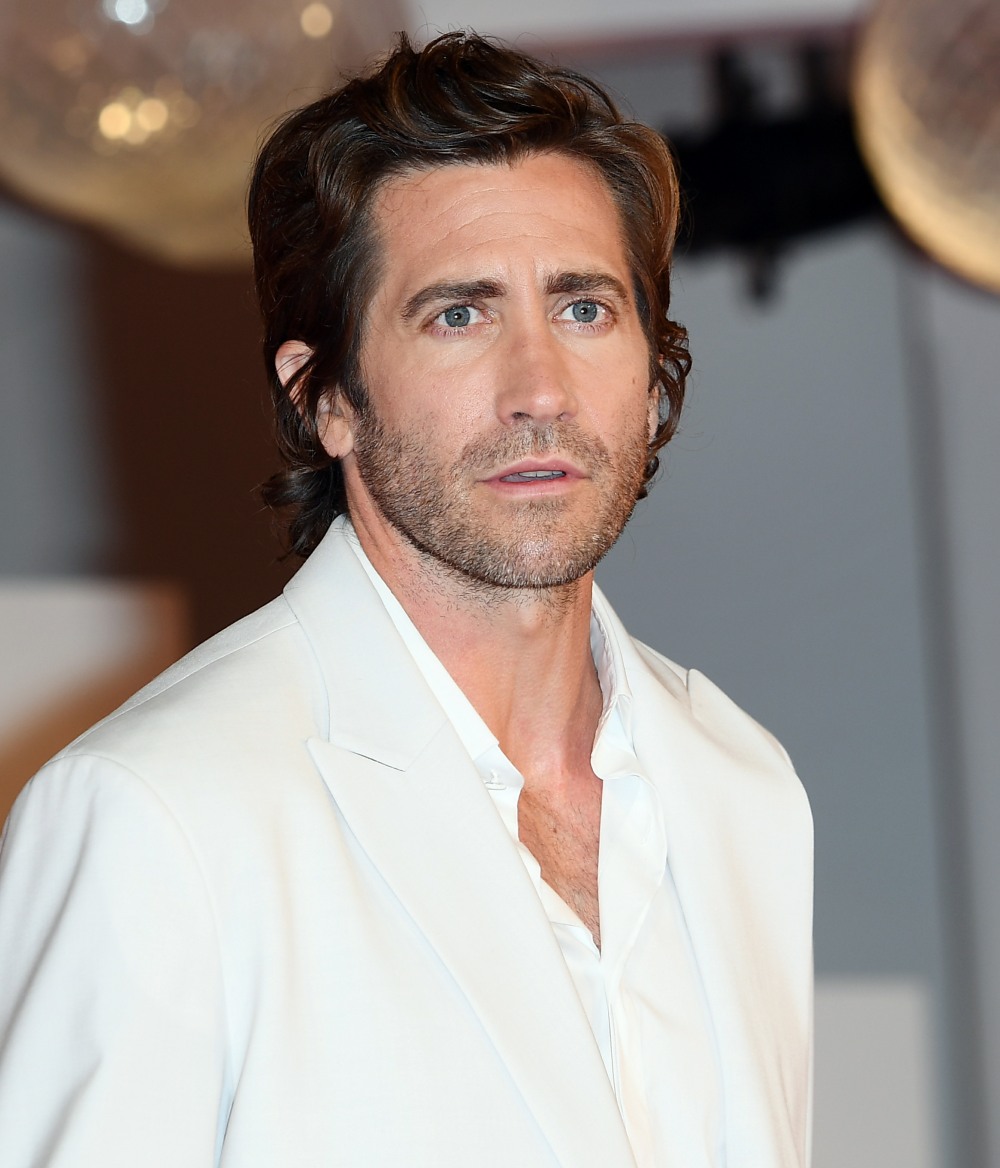 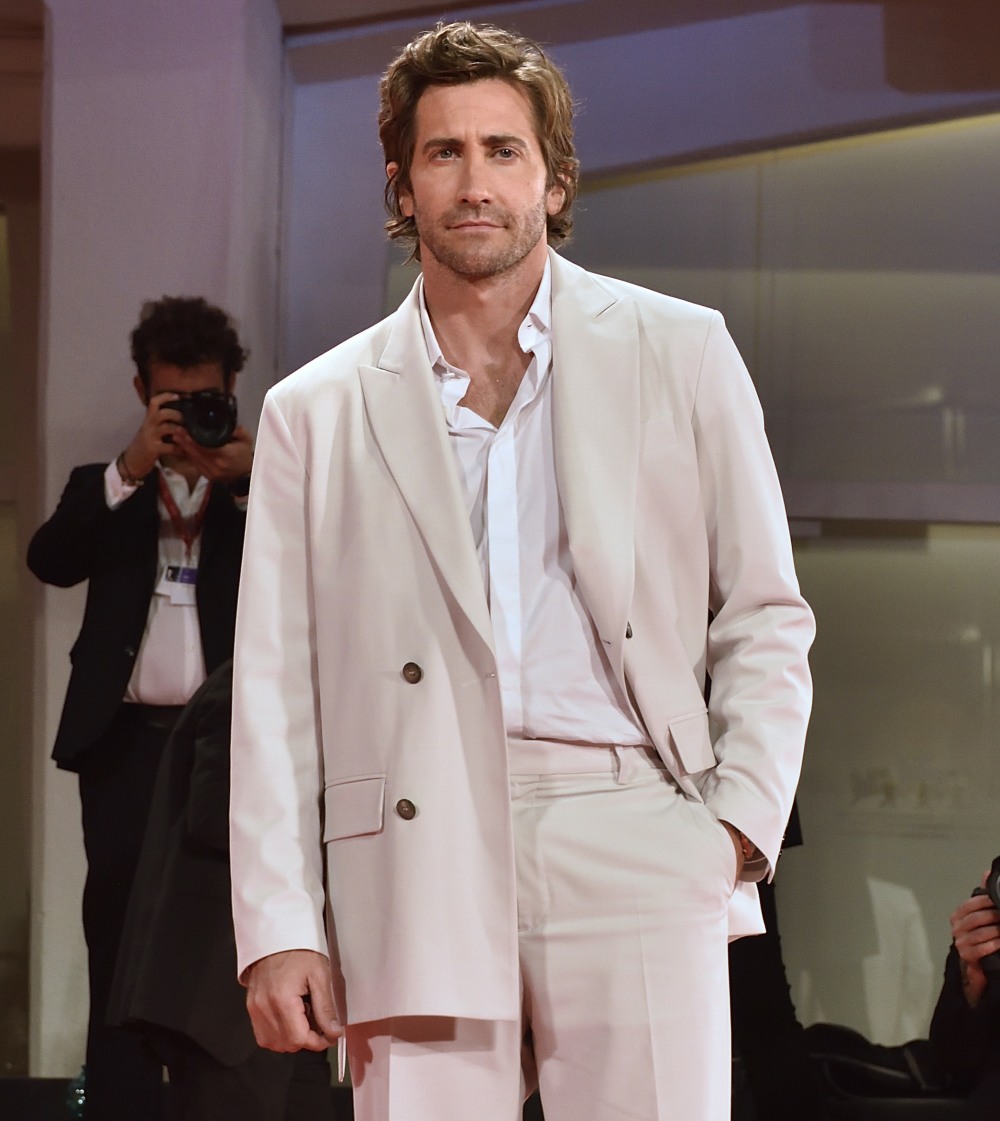