Is Kat Von D closing her LA tattoo business because she’s an antivaxxer?


Kat Von D is making headlines because she’s closing her Los Angeles tattoo studio after 14 years, High Voltage tattoo in West Hollywood, and moving to Indiana. Kat married musician Leafar Seyer in June 2018 and they welcomed a baby they named Leafar Von Drachenberg Reyes in December of that year. Kat announced that she would raise the baby vegan, “without vaccinations,” ahead of his birth. She unconvincingly tried to deny being anti-Semitic and an antivaxxer after backlash over her statements and behavior started affecting sales of her makeup line. She’s since sold her shares in that line to another company and it’s been rebranded KVD Beauty.

In December, 2020 Kat bought a mansion in the town of Vevay, Indiana, but denied that she was moving there full time. She wrote in an Instagram story that she “felt the need to plant roots in a small town” due to California’s high tax rate and “tyrannical government overreach” but that she wasn’t selling her LA home. As Michael K at DListed points out, Kat also violated California’s covid restrictions by having a large indoor Thanksgiving gathering back in 2020. And she supported the recall of Governor Gavin Newsom, which of course was a massive failure.

Now that the county of Los Angeles is about to implement an indoor vaccine mandate, Kat has announced that she’s closing her tattoo business there and moving to Indiana. On the website for High Voltage, I could not find a single line about covid precautions or mask-wearing. Kat doesn’t seem to work there anymore and has six other tattoo artists, all men, listed on the site. Here’s what she wrote on Instagram:

As some of you know, we recently purchased a beautiful home on a bit of land in rural Indiana, and the more time we spend out there we realize we feel more at home there than we do here in LA.

After much thought, we have decided we will permanently be moving to Indiana at the end of this year. We plan on selling our beautiful home here, and I will most likely open a private studio in Indiana once we are done with the house remodel there.

This means that, sadly, I will be closing my beloved tattoo shop @highvoltagetat here in West Hollywood on Dec 1. I didn’t think it would make sense to keep it open if I wasn’t present, and aside from coming back to work on music with my band, we don’t plan on returning to LA very often.

With that being said, we will be celebrating the HvT legacy this next month and a half by tattooing regularly at the shop, and welcome all of you to come and get tattooed by one of my talented fellow artists in the month of November! Appointments are booking up quickly, so I suggest either coming by the shop and setting up time, or going to highvoltagetattoo.com and making your appointment!

Kat has a music career now, and her band has been touring and doing shows the last couple of months. So I guess she’s focusing on other things. Incidentally I see zero masks in any of her recent Instagram posts. Apart from the “tyrannical government overreach” post I can’t find where she’s posted about the covid vaccine. She learned in 2018 that speaking out against vaccines affects her businesses. Instead of going full In-N-Out she’s just closing up shop and moving to a state with a republican governor. I doubt she’ll be missed.

From late December of last year: 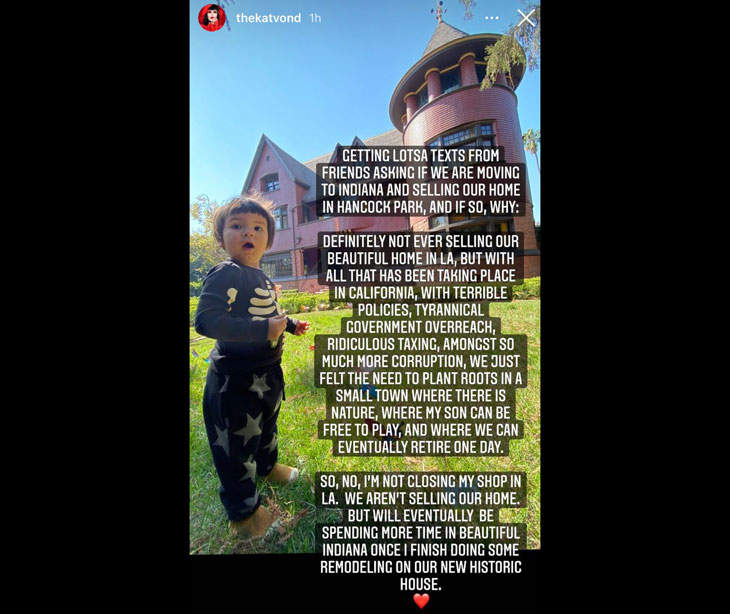 Read the caption below. She posted this in December, 2020 about “so many people coming to the house.”

41 Responses to “Is Kat Von D closing her LA tattoo business because she’s an antivaxxer?”