If anything can make me come around to a couple, it’s a good couple costume. What? I never said I had high standards. Kourtney Kardashian and Travis Barker did a great job dressing up as Edward Scissorhards and Kim on Halloween:

Travis nailed it. The wig and makeup are fantastic. I’m sure he had help. But if you flip through the photos, he’s has the bewildered expression down pat. Kourtney looks good, but Kim is not a difficult costume to recreate. She doesn’t quite capture the feeling of Kim, however. That’s fine, she doesn’t have to and her costume is great. It’m just quibbling because Travis hit it so far out of the park. This almost makes up for the fact that they dressed as Nancy Spungen and Sid Vicious a few days prior. Those costume, too, were well executed, but good taste was not. They also dressed as Clarence and Alabama Worley from True Romance, which is Travis’ favorite movie. That’s cute.

Other notable couple costumes were Channing Tatum and Zoë Kravitz who dressed as Travis Bickle and Iris from Taxi Driver: 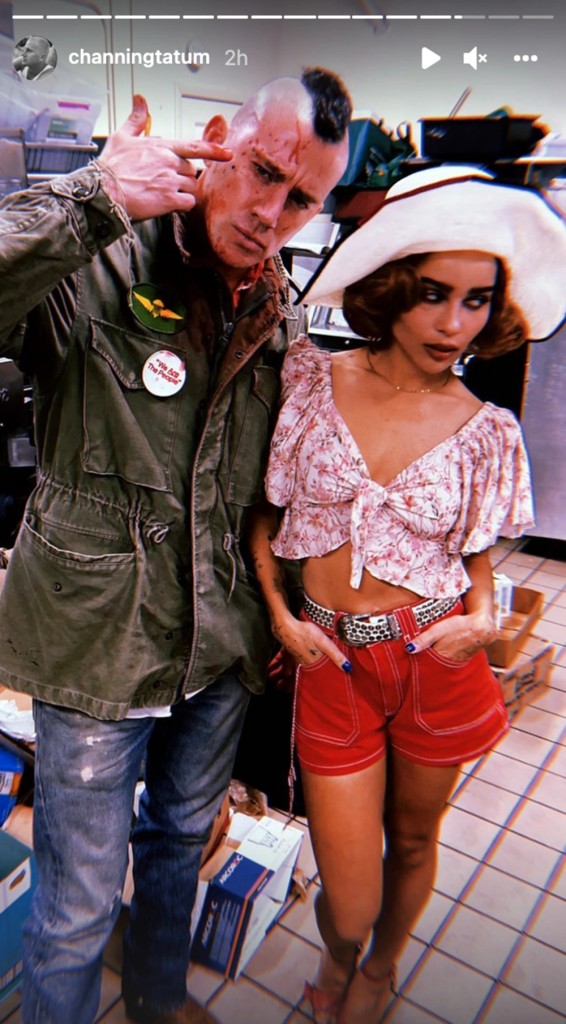 Another well done recreation. My gawd that was a tragic movie. If I can be sad looking at Channing and Zoë together, you know they got the look right.

I did not get sad looking at photos of Katy Perry and Orlando Bloom who went as a vaccine and a doctor. Katy enlisted her Foam Guy to make her a custom piece with her own lab name of “Katy & Perry” on the side of her syringe:

Orlando’s name badge reads “Dr. Dilf.” I don’t know who the Instagram Filter and No Filter couple are in Katy and Orlando’s photos. The guy looks like Steve Carell but that’s not Nancy Carell. Maybe it’s Katy’s sister and her partner? It looks like a fun group. I love Orlando’s caption.

Credit where credit’s due, Miranda Lambert and her cop husband dressed as Maverick and Charlie from Top Gun and they looked great:

I could be a jerk and point out that Charlie was a civilian and wouldn’t wear a naval bomber jacket, but we’ll pretend she just picked that up off Maverick’s floor.

Joe Jonas and Sophie Turner dressed as Isabella and Paolo from The Lizzie McGuire Movie and enlisted their friend Olivia De Jonge as Lizzie: