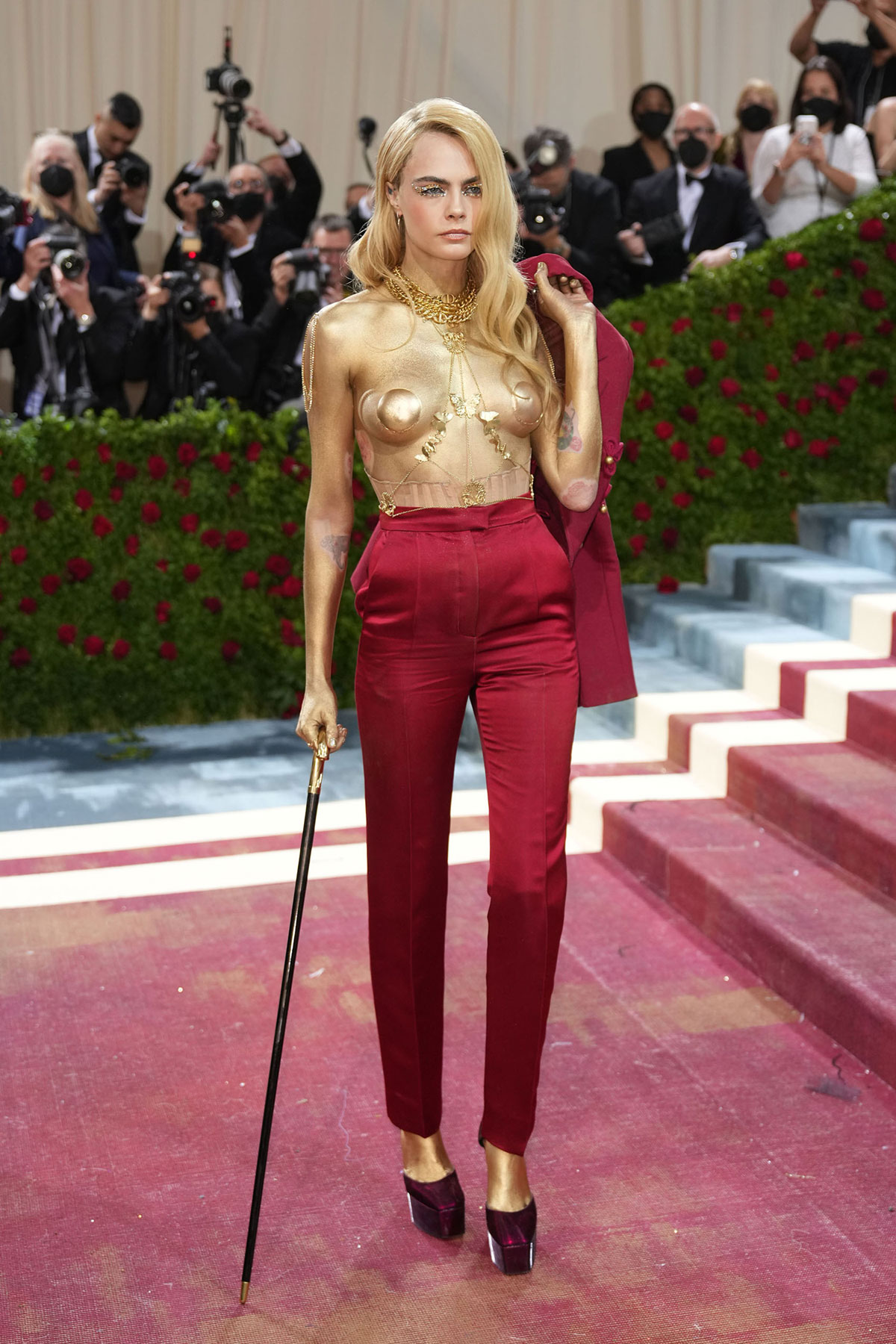 Cara DeLevingne was one of the later arrivals on the Met Gala red carpet but she stood out since she was painted gold. She looked like an inept Bond villain. I don’t know if our ad company will let us get away with posting these photos since she’s basically wearing pasties and some jewelry. The cane is very Monopoly Man. Cara’s pants and jacket are Dior. 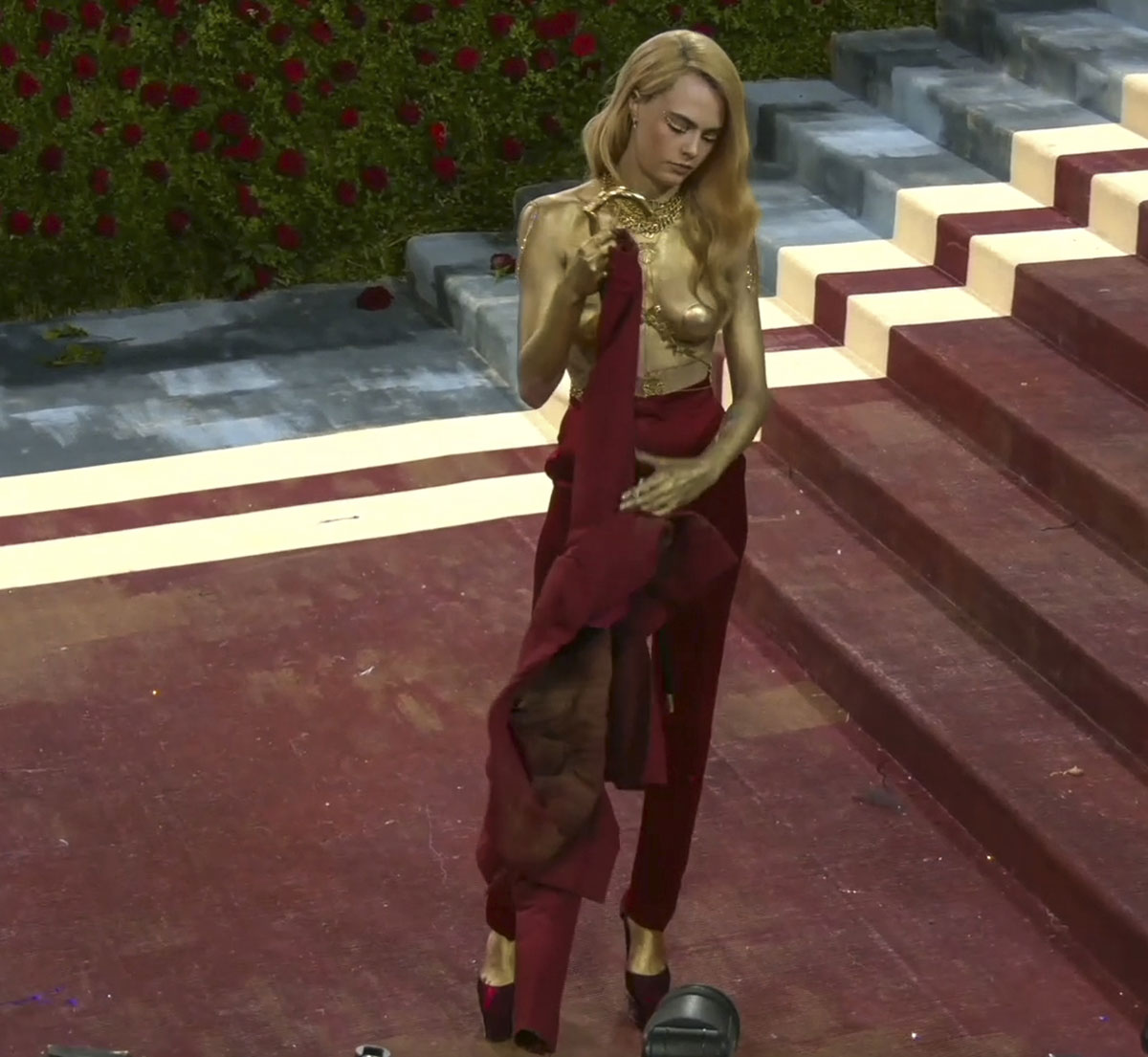 Speak of inept Bond villains, Elon Musk went to the Met Gala with his mom, who was in a Dior gown. La La Anthony asked him what his plans were for Twitter and he said he wanted more diversity on the platform (bullsh-t, he means more fascists) and that he wanted more people on it in general.
Embed from Getty Images

Louisa Jacobson was in an elaborate sheer Schiaparelli gown with gold leaf accents and a ruffle peplum and hem. What do the Fug Girls call this, High Fugshion?
Embed from Getty Images

Look at the back! This is giving me shades of Goop’s Golden Globe outfit.
Embed from Getty Images

Carey Mulligan got the much, much better Shiaparelli. I love this gown. Look at the detailing in the herringbone pattern of the metallic pieces and beading. Carey and Marcus Mumford are so hot together. 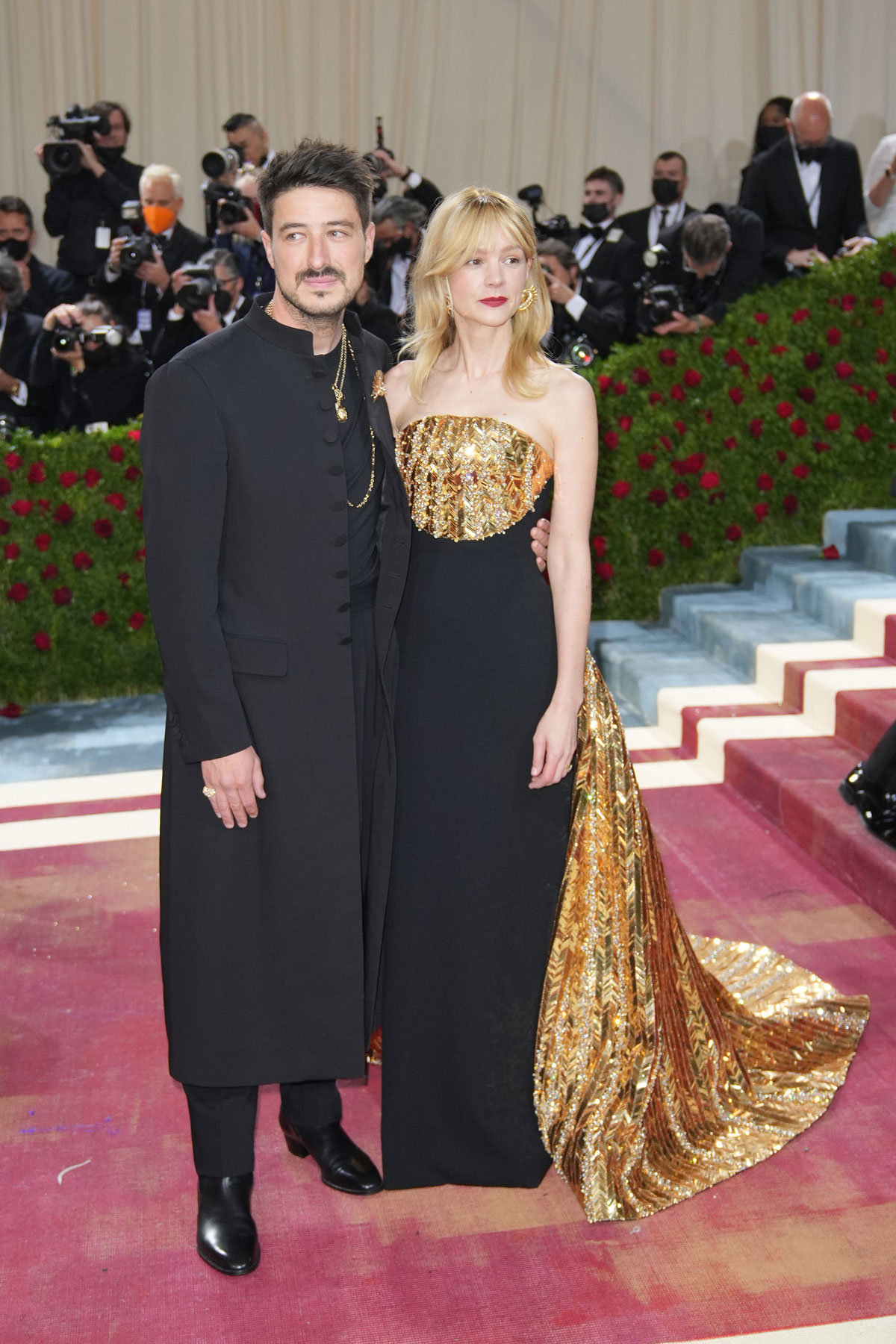 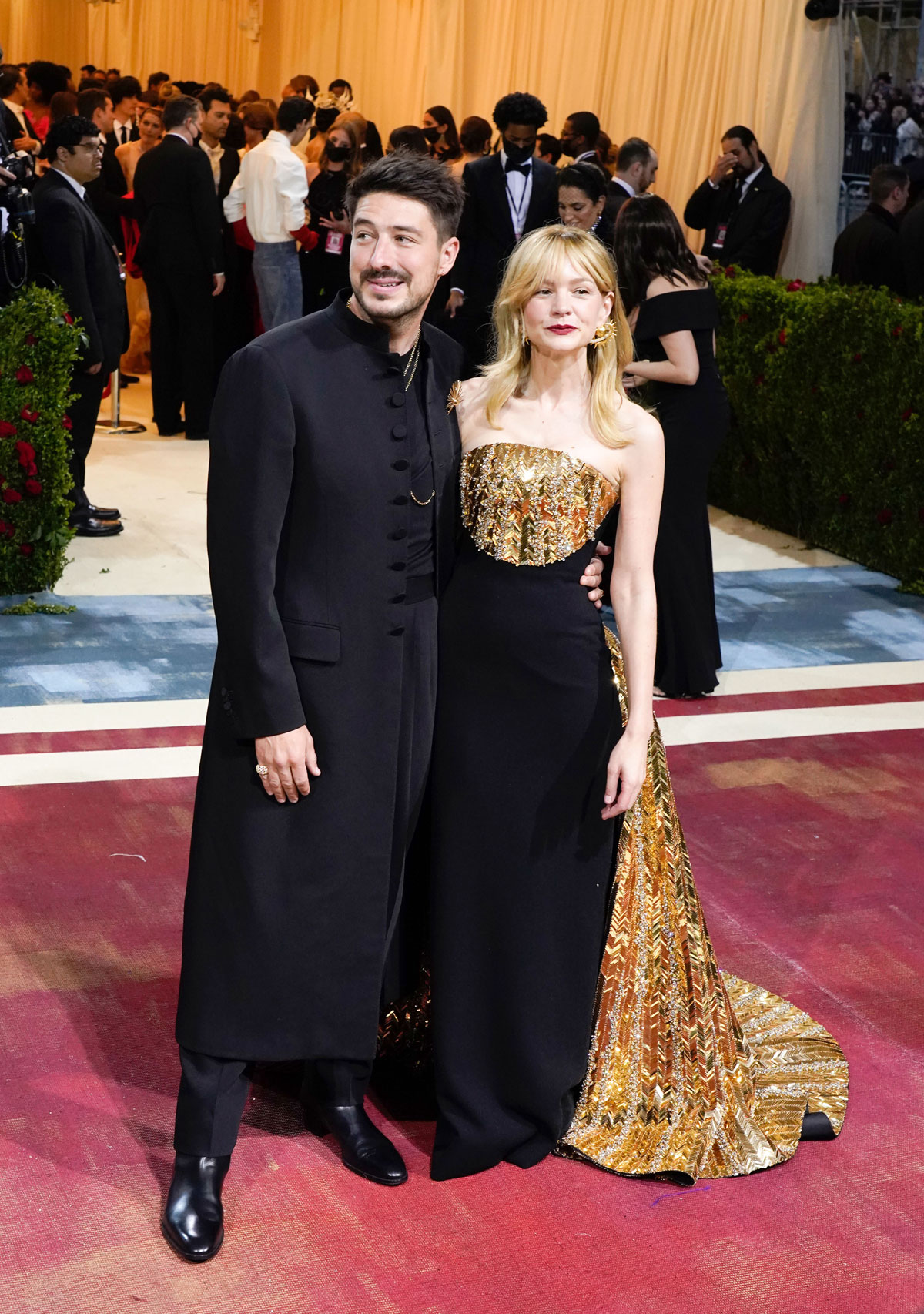 Jessie Buckley was also in Shiaparelli and she’s giving me robber baron vibes, which is definitely on theme. Her upcoming horror movie is called MEN too. It better involve some revenge. This is fun. 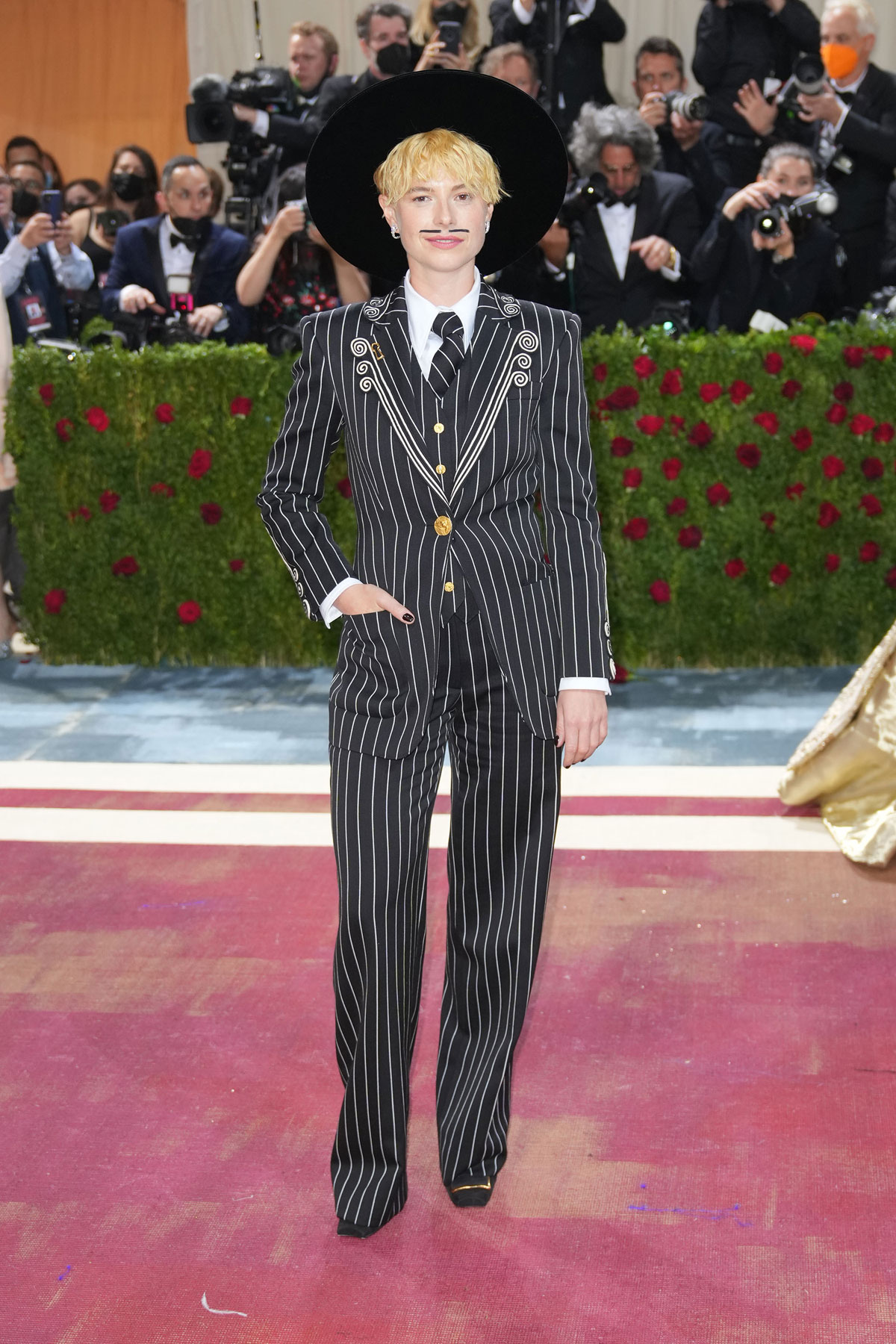