Teddi Mellencamp on the reaction to her neck lift: ‘everybody went crazy’

Last week we talked about Teddi Mellencamp’s disclosure on getting a neck lift. She had a cosmetic procedure for a genetic ‘flap’ that drove her crazy Whether she needed it or not was not the point, the issue was she documented the whole thing to be transparent. A fan called her out for promoting herself as a fitness coach and then getting plastic surgery to obtain her look. So Teddi asked her fans what they thought: should she keep those kinds of procedures a secret or should she remain transparent?

As I suspected, there was more behind Teddi sharing the disgruntled fans comments. Apparently, Teddi got a lot of push-back over the procedure. Although she claims most of the comments were positive, she told Billy Bush that “everybody went crazy” about it.

Former “Real Housewives of Beverly Hills” star Teddi Mellencamp opened up to “Extra’s” Billy Bush about undergoing a neck-lift recently and all the online reaction she’s received.
Teddi told Billy, “Everybody went crazy. I mean, there was way more positive than there was negative, but I kind of wanted to point out the negative because people continuously want to know all the details, but when you give them the details, they are upset about it.”

Teddi said of going under the knife, “If you don’t want to get rid of it, don’t get rid of it, but I think we live in a world of filters,” saying she didn’t want to be that person who credits their changing look to drinking “a bunch of water.”

Billy asked if the neck issue was related to her past weight fluctuations and having kids.

The 40-year-old answered, “It was a multitude of things,” adding, “One, it’s an anatomical position of where your… hyoid bone is located,” saying it affected the “slope” of her neck.

She went on, “Add to years of fluctuating weight, you know, gaining over 80 lbs. and losing it, not even just with kids before kids, since pretty much I was 17 years old, that my body had lost that elasticity.”

Billy added, “Well, most of the comments are positive. There’s always going to be idiots out there. What do you think Amy Schumer got? She just posted her liposuction.”

Teddi replied, “Truthfully, whatever makes you feel beautiful and makes you feel happy, do it. And if for those of us, you know, myself, Amy Schumer, anybody who’s open to share it… Somebody sent me a comment and said, you know, ‘Some of us don’t have sisters and mothers and best friends that give us this information, and so we are still afraid to talk about it, but when you guys open that you also have these insecurities and go through these things and makes it feel all right.’”

I was on Teddi’s side before. I have no problem with a person who wants plastic surgery and I felt she explained her reasoning. But reading this, I don’t think she gets it. “If you don’t want to get rid of it, don’t get rid of it,” is not the criticism. Many of us can’t get the procedure done, be it money, time or medical condition. So as a fitness/wellness professional, Teddi is now selling an unobtainable goal when she resorts to plastic surgery. I argued that even physical trainers and diet coaches should be able to address their insecurities, but Teddi’s talking about being honest and the honest part is, cosmetic procedures are not something we can all include in our ‘journey.’ That’s why I suggested it could have been a great opportunity to discuss realistic targets with clients and followers. Teddi admitted in this interview that elasticity did play a part in her neck waddle. I know nobody wants to hear “you’re going to work hard and at the end of all of this, you’ll probably have skin sag and stretch marks,” but if a person is pointing to a photo of Halle Berry, it would be nice to set the expectations on realistically what it will take to get there. (Not saying Halle had plastic surgery, but I would need it to get her body.)

I tend to agree with Teddi about having a tweak if it makes you happy. But one of you said in the last post that you were tired of everyone having the same face. Remember I live in Los Angeles where there is a thing called the L.A. Face. Procedures aim to homogenize women here. I’ve not had work done. I doubt I will. I know, never say never. But if I didn’t do it when I was younger, I can’t think what good it would do me now. I’ve decided that what’s going to make me truly happy is to be more forgiving of myself and my imperfections. I’ll work on some things and celebrate others. But they all come with a story and I’ll focus on those instead. 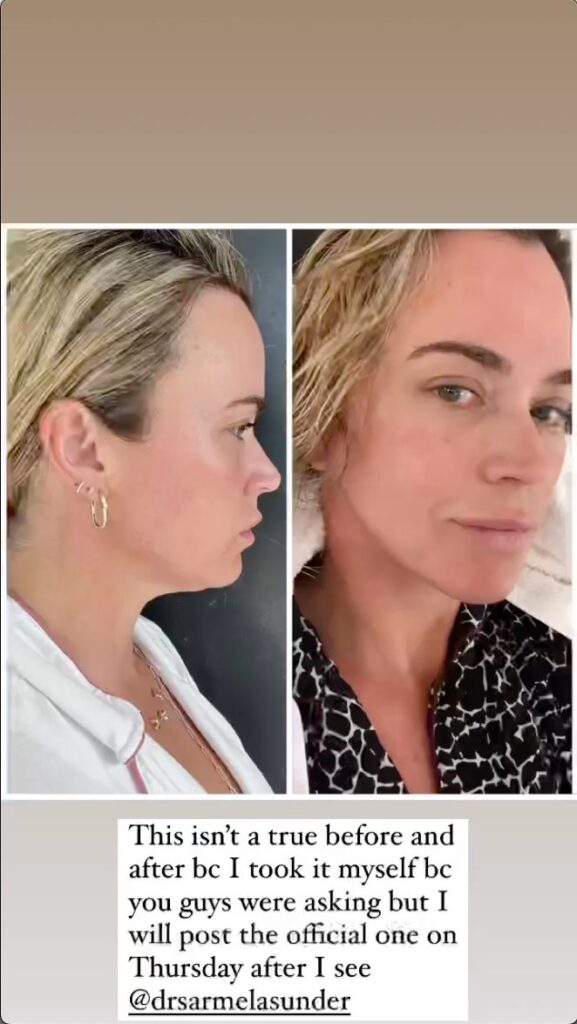 16 Responses to “Teddi Mellencamp on the reaction to her neck lift: ‘everybody went crazy’”