Anne Heche was in two car crashes on Friday, the second of which was really bad and put her in the ICU and destroyed the home she crashed into. The home’s tenant and her pets were able to escape uninjured (there’s a GoFundMe) and Anne is in the hospital with severe burns. It was first reported that Anne was in stable condition, however, that information was inaccurate and her spokesperson said so to CNN, adding: “She has always remained in critical condition, slipping into a coma following the accident. She has a significant pulmonary injury requiring mechanical ventilation and burns that require surgical intervention.”

Before the second, more serious crash, Anne was involved in a hit-and-run with another property earlier that day. Because of the two crashes and potentially due to her podcast episode posted the same day as the crash, the LAPD has gotten a warrant to test Anne’s blood to determine if she was intoxicated while she was driving.

Anne Heche will have to give a blood sample to police after crashing her car into a home in Los Angeles.

The LAPD received a warrant to test the “Six Days, Seven Nights” star’s blood to see if she was under the influence of drugs and/or alcohol at the time of the crash, Page Six confirmed.

Officers believe Heche, 53, was intoxicated when she plowed her blue Mini Cooper into a house Friday and sustained severe burns after the vehicle caught fire, but her blood test results could take weeks, TMZ reported.

Sources also told the outlet that, at the minimum, the LAPD will refer Heche’s case to the LA City attorney, who could press hit-and-run charges, as she reportedly slammed into a garage and drove off before driving into the nearby house.

“The info we received this morning was a warrant was obtained the same day as the traffic collision, which was August 5. The warrant was to draw blood, and an investigation is ongoing pending the blood test results,” a rep for the LAPD told Page Six. “If found intoxicated, [Heche] could be charged with misdemeanor DUI hit and run. No arrests have been made so far.”

Officials with the LAPD West Traffic Division also confirmed that Heche hit another vehicle before taking off again and hitting the house.

LAPD got the warrant the day of the crash because the blood draw has to be done within hours. They’re still waiting for the results, but Anne hasn’t been able to talk with them at all due to her serious injuries. As mentioned in the previous post, Anne’s podcast had posted an episode earlier that day during which Anne was drinking vodka and wine. The podcast episode was pulled down after the car crash and her podcast producer has since denied it was taped on the same day, saying that it was recorded earlier that week and posted later. A hair salon owner told The LA Times that Anne was in his salon that morning, just two miles from the crash site. He said she seemed pleasant and not intoxicated, but did say she grabbed his face, which is definitely odd behavior. From the overall reporting, it doesn’t seem like Anne was rushing away from anything and it’s unclear whether the accidents happened in her neighborhood or close to her home.  This sounds like a very dangerous situation and it’s fortunate that no one was killed. Hopefully all involved are okay. 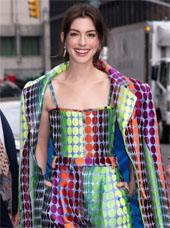