Jennifer Coolidge just won an Emmy for her role in The White Lotus. I liked The White Lotus, but I was surprised how much it cleaned up at the Emmys. Of course, I felt the last season of Ted Lasso was over-rewarded as well, so I guess I just don’t have my finger on the pulse. However, I was thrilled Jennifer won because she’s never won before, and I am loving the Jennissance. And I’m glad it was for her portrayal of looney Tanya because Mike White wrote that role specifically for Jennifer and had to talk her into playing it. Part of the reason Jennifer said no initially is she said she’d been “self-destructing” and didn’t feel good enough about herself. Once Mike talked her into the role, Jennifer had to overcome feeling self-conscious about her appearance, both her weight and how pale she was. So she decided to get a spray tan before showing up in Hawaii. Only something happened and an allergic reaction to the tan used landed her in the ER.

Jennifer Coolidge is revealing how the show accidentally sent her to the emergency room.

The actress, who plays the wildly wealthy and unstable Tanya McQuoid in the hit HBO series, said she had a particularly nasty reaction to a bad spray tan she received before filming began.

“For The White Lotus, I didn’t want to look like a big, white marshmallow on the beach in Hawaii, so I got a spray tan,” she told Allure. “I got on the plane and I started to feel really weird. By the time I got off the flight, I had to go to the emergency room.”

Her sudden health scare prompted production to change her onscreen makeup routine too. “I think we ended up using regular makeup,” she recalled. “The minute we stopped filming, I would shower. I have such a quick reaction to stuff.”

Coolidge added that her makeup allergy is a relatively new development. “I was never someone who cared very much about ingredients,” she said. “Then, I’d say the last five or six years, I started getting allergic. My eyes would always be tearing up, but it never occurred to me that it was my makeup.”

I think part of my attraction to Jennifer is how many of her antics would happen to me. Like the spray tan I got to make me feel less self-conscious trying to kill me – that’s a Hecate move, for sure. Jennifer lives in New Orleans. A direct flight to Hawaii would be just over eight hours. That’s a long time to not know what’s wrong with you. It’s also a very long time to have a chemical reaction working on you. As they keep reminding us in science class, the skin is the largest organ on our body and if it’s having an adverse reaction at 30,000 feet, that would be frightening. I guess the only good thing is it led to Jennifer realizing she had a makeup allergy, so they were able to adjust her makeup for the shoot.

As has been reported, Jennifer is the only cast member to return for season two of The White Lotus. The next season takes place in Sicily. I’m sure they will have sunny weather, but maybe Jennifer can spend her scenes under an umbrella rather than risk her life for a tan. Or maybe *SPOILER* she’s at this resort to bury Greg and she wears a veil the whole time.

In case any of you are like me and wondering what the name of next season was, The White Lotus is the brand name for the future season hotels and season two is The White Lotus: Blossom Circle. Jennifer filmed a brief teaser for the show in the style of a hotel commercial: 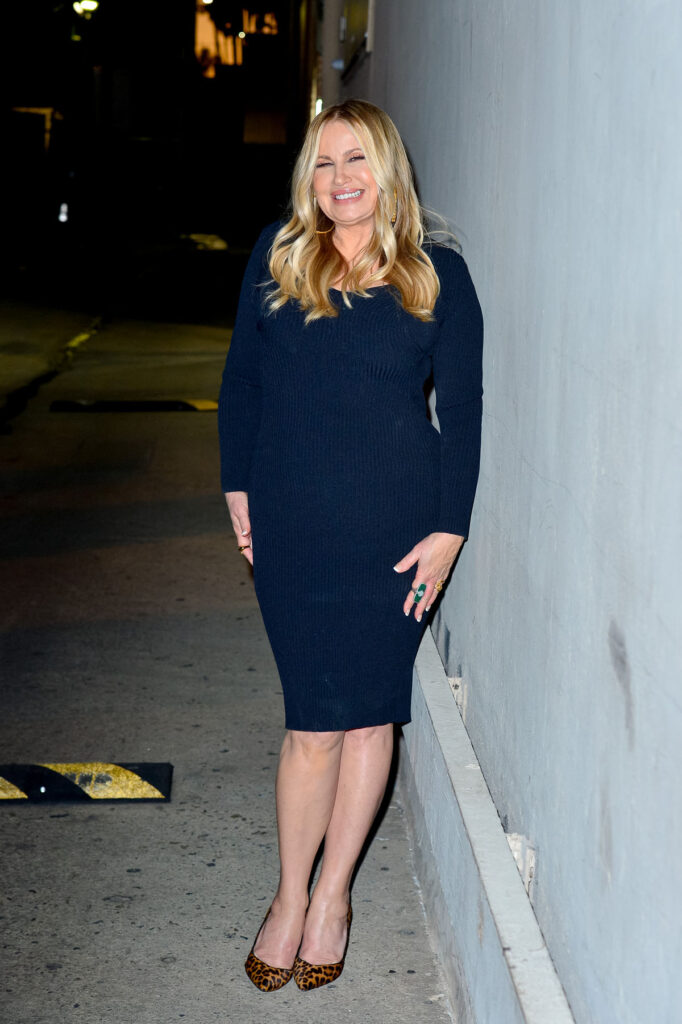