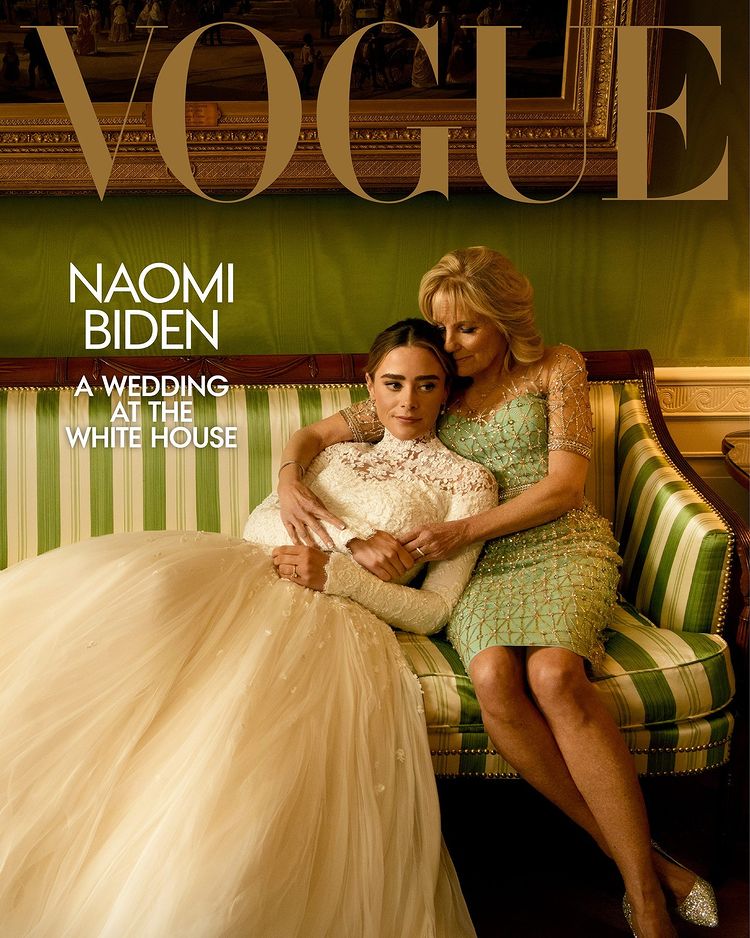 Over the weekend, President Biden’s oldest granddaughter Naomi Biden got married at the White House. For those in the back, the Bidens paid for the wedding privately, meaning the family picked up the cost of the event planner, the flowers, the dress, the cake, the food and whatever needed to be rented from outside the White House. It’s clear that President Biden and Dr. Jill are hands-on grandparents with all of Hunter and Beau’s kids, and for Naomi in particular, I feel safe in saying that her grandpa was probably more of a father to her than her actual father, Hunter. In addition to the photos posted by the event planner, the Bidens also organized a gorgeous wedding shoot with Vogue. Vogue gave Naomi and Dr. Jill their first digital cover. There was a lovely write-up too – go here for the full piece. Some highlights:

Naomi & Peter just wanted to get married in someone’s backyard: At 11 a.m. on Saturday, November 19, the young couple, both lawyers—Naomi at the Washington, DC, firm Arnold & Porter, and Peter at the Georgetown Law Center on National Security—married on a crisp and cloudless day on the South Lawn in front of 250 family members and friends. “We’re so close to our families, so we always knew we’d get married in someone’s backyard,” explains Naomi. “I think if my pop weren’t president, it would probably be their house in Wilmington or Peter’s family’s backyard in Jackson [Wyoming].”

Bittersweet Symphony: In a high-neck, long-sleeved Chantilly lace Ralph Lauren dress and carrying a bouquet of sweet peas and lily of the valley, Naomi was accompanied down the aisle by her parents, Hunter Biden and Kathleen Buhle, to a string quartet playing Verve’s “Bitter Sweet Symphony.” White scarves and hand warmers were placed on each seat to help guests combat 40-degree temperatures during the hour-long ceremony, which was overseen by a priest and a pastor from each of the families’ churches. Wearing a navy three-piece Ralph Lauren suit, Peter then escorted his wife up the stairs of the South Portico—swathed with ivy and white roses and hydrangea—for a luncheon in the State Dining Room.

An evening reception in the White House residence: In the evening, guests returned to the residence for a black-tie reception with dancing, cake cutting, and “all that fun stuff,” per Naomi, who wore a strapless ivory silk Mikado Reem Acra dress with her grandmother Roberta Buhle’s pearls sewn into the sweeping six-foot train. (For late-night dancing, Naomi switched to a beaded fringed Markarian mini-dress.) The bride and groom climbed a ladder to cut a seven-foot-tall, eight-tier lemon cake with buttercream frosting, while nearby, a dessert bar included everything from 20-inch apple pie (the groom’s cake) to the president’s favorite Graeter’s chocolate chip ice cream. “He used to be a Breyers guy all the way but we’ve gotten him to upgrade to Graeter’s,” Naomi says.

Why Naomi & Peter are living in the White House: When the couple’s lease ran out on their DC apartment, they asked Nana (Jill) and the president if they could move in for a few months while wedding planning, along with their mini Australian shepherd, Charlie, who can often be seen gamboling on the South Lawn with the Bidens’ German shepherd, Commander. “I try to remind myself it’s the White House, but it also gets normalized over time,” says Naomi.

She’s lived close to her grandparents for much of her life: Naomi has lived less than a mile away from her grandparents for most of her life. “The relationship hasn’t changed that much,” Naomi says. “When I was in middle school, we lived so close, and they were at every sports game and our school plays. We still do the same things. It’s always been this way.” Of course, prosaic family activities like movie nights are now held in a White House screening room with freshly made popcorn and Secret Service in the back.

Jill Biden enjoyed being involved in the wedding planning: “Naomi has a strong sense of herself and had a vision for her wedding,” says the first lady. “It was fun to see her finding so much joy in all the details.” These details were discussed in the evening over a glass of wine—Cabernet for Dr. Biden, Sancerre for Naomi—or when attending barre and SoulCycle classes together in Georgetown. “She slips right in; it’s pretty normal,” Naomi says. “I do know she lost sleep over the fact that I was planning to serve turkey sandwiches at the lunch,” Naomi adds. (They amended the menu to chicken pot pie, as a surprise for the father of the bride, as it is Hunter’s favorite and the dish Dr. Biden cooks for him every year on his birthday.)

Advice from Nana: But keeping perspective was the main thing: “She has really stressed to me that every time I get anxious about wedding stuff to take a breath and remember that it’s just a day about Peter and me and being around the people we love,” Naomi explains. “She’s taught me so much about being independent and self-sufficient. But that doesn’t mean you can’t also be a selfless and fiercely loyal partner.” (When asked about marriage advice, Dr. Biden says she told her granddaughter only to “maintain your independence.”)

I almost cried at the sweetness of the Biden family’s closeness, and how much the grandchildren adore Pop and Nana. Jill Biden was so happy to be included on so much of the wedding planning and helping to ensure that her beloved granddaughter have such a special day. I love that Naomi made sure to include Pop’s favorite ice cream at the dinner reception too!! I’m reminded of some lowkey Delaware gossip, which is that Joe and Jill Biden have always been social butterflies and they love hosting parties and events. It was hard for them to be hosts like that when Joe was VP, and it’s even harder now that he’s president. President Biden and the First Lady must have loved every second of this, that they got to give this to Naomi.

PS… Yes, I’ve seen the White House reporters freaking out about this and calling the Bidens “liars” and I think it’s all pretty pathetic. 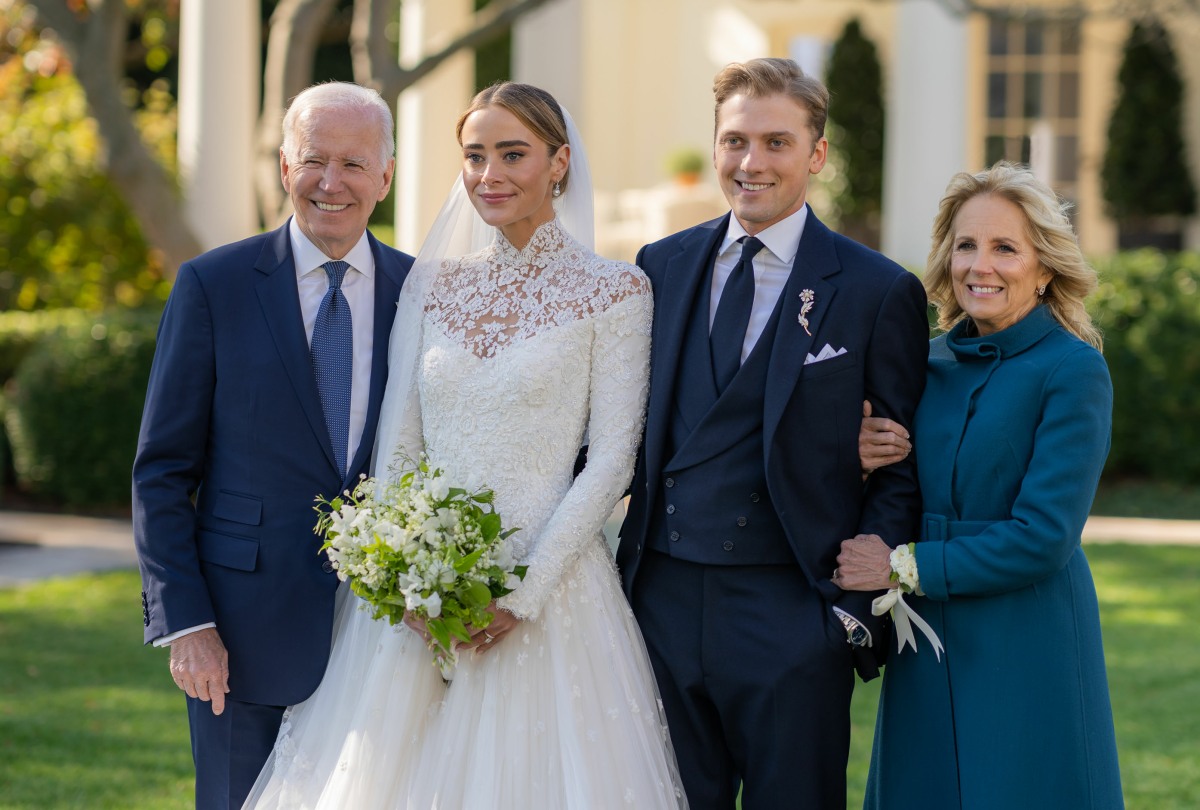