Denise Richards on Charlie Sheen: ‘I will always be a good friend to him’ 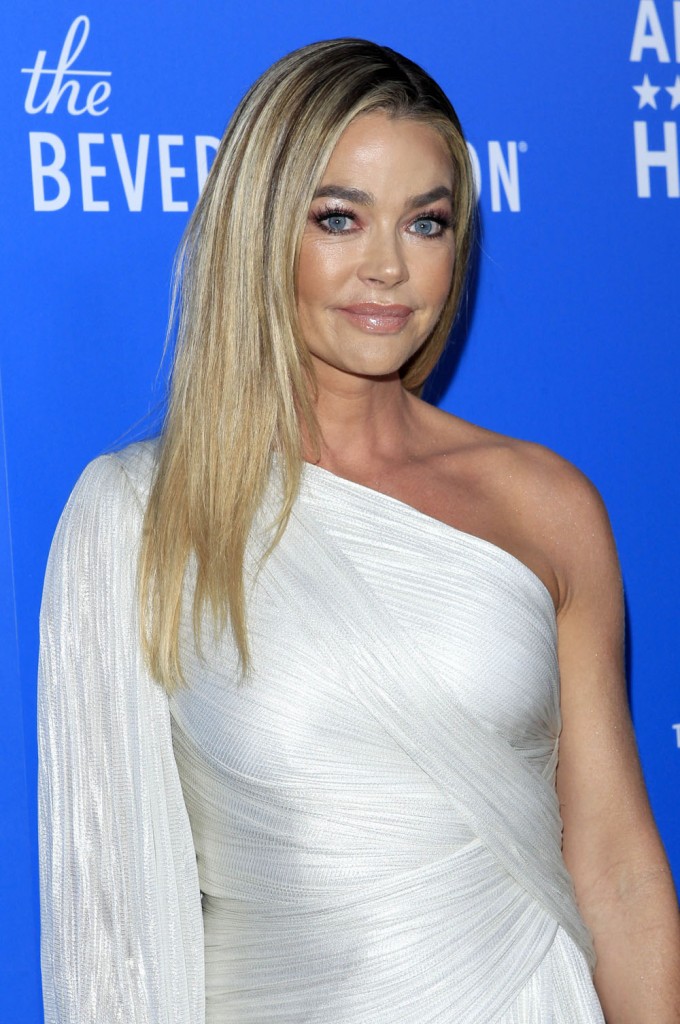 I remember reading Denise Richards’ 2006 petition for a restraining order against Charlie Sheen after she filed for divorce. The Smoking Gun published it, they used to be the go-to outlet before TMZ, and it seemed outrageous. Sheen had threatened to have her killed, he was physically abusive to her, he told her abort their child and he regularly solicited sex online. Outlets claimed that Denise must have been exaggerating because it belied belief. Then we saw Charlie’s behavior during his 2011 breakdown and Denise’s court documents were all too plausible. Denise dealt with a lot, she even managed to co-parent with Charlie until he inevitably starting being abusive to her again, and she’s letting him see their daughters Sam, 14, and Lola, 13. In a new interview with People, Denise is nothing but gracious about Charlie, as she’s been all along. Last fall she remarried and she is currently on Real Housewives of Beverly Hills.

“I was never bitter about my divorce,” says Richards…

“Going through everything, it changed me,” she adds. “But I love life and I’m a glass-half-full kind of person. And I did my best to rise above it.”

Still, Richards, 47, admits that being pulled into a difficult time in Sheen’s life (he was open about a drug and alcohol relapse and went on bizarre rants about tiger’s blood and winning) was “extremely disheartening.”

“Times were extremely negative and I would have to tell myself, this too shall pass,” she says.

Now, the Real Housewives of Beverly Hills star is happily remarried to wellness practitioner Aaron Phypers, whom she met in 2017 and wed last September. And she’s grateful for the lessons she’s learned in life and love.

“We have an amazing relationship,” Richards says of Phypers. “We love each other for who we are and we don’t judge each other. And for him to embrace a single woman with [three] daughters and an ex-husband with a wonderfully colorful past, it’s a lot. That made me fall in love with him even more.

Phypers “is amazing with the girls,” she adds. “He’s such a great stepdad, and they’re close to him.”

When it comes to Sheen now, Richards says despite their once contentious relationship, she is supportive of her ex, who is now sober, as well as his connection with their daughters.

“I’m supportive of the girls having a relationship with their dad,” she says. “Whatever is going on with a couple, the children should not be privy to it. Obviously, there are times when emotions might flare up. But we’re human beings and we make mistakes. I know that when someone is struggling with addiction, sometimes choices are made that are not in the best judgment, and I have empathy for that. I want Charlie to be the best person and father he can be.”

She’s been through so much and she’s always been so gracious about it. I doubt I could be like that if I had to coparent with Charlie Sheen. I would want all visits with the kids to be court monitored visits as well.

Denise has another daughter, 7-year-old Eloise, whom she adopted as an infant. Denise told People that Eloise has a chromosomal disorder and that she has developmental delays. She can say only a handful of words and is emotionally challenged. Denise is pragmatic about that too. She told People “You take care of your children no matter what is going on with them.”

Missing my beautiful girls … I’m sure every parent can relate to juggling the family & working. Miss them so much. This was taken at our wedding @aaronwilliamcameron #Lola #Eloise #Sami

Her dogs are so cute!

I think I should create an account just for our animals🐾 thoughts?? #lily #leo #george looking handsome on his new sweater giving Leo 💋💋💋

27 Responses to “Denise Richards on Charlie Sheen: ‘I will always be a good friend to him’”