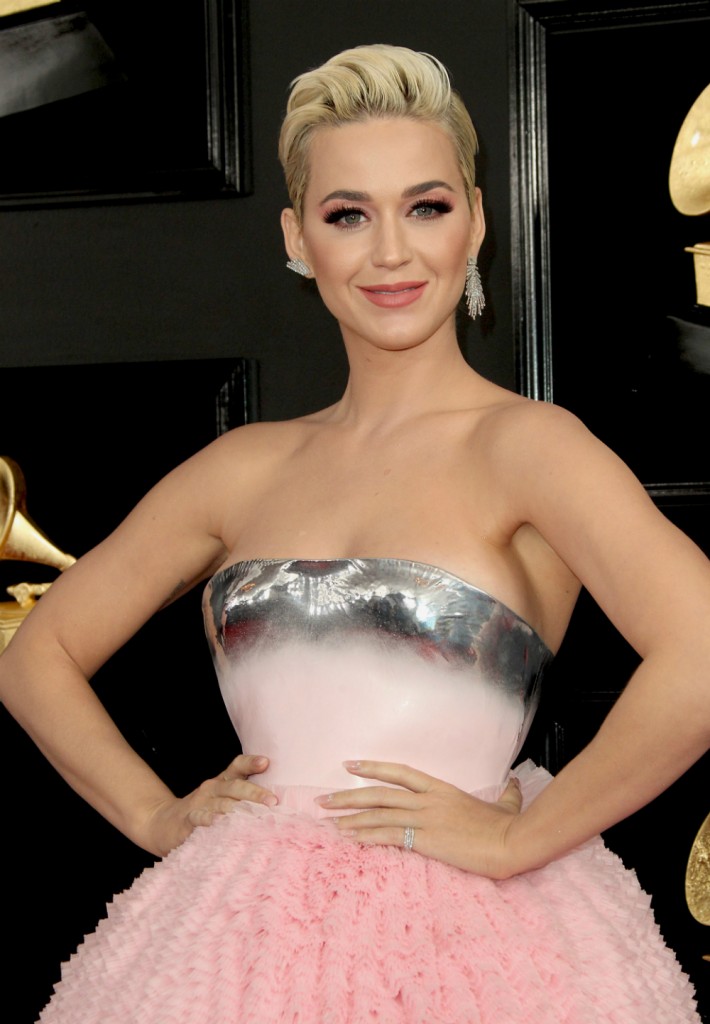 Controversial opinion: I love Katy Perry’s current hairstyle. The color could be softer but the style is darling and I kind of wish I could pull it off. Katy, as we know, recently got engaged to her maybe-we-are-maybe-we-aren’t partner, Orlando Bloom. Honestly, I didn’t think they had it in them to go the distance, but I was surprised at how happy I was to hear the news. So far, all we knew was that they got engaged and what Katy’s ring looked like. But while on Jimmy Kimmel Live to promote American Idol, Katy gave some details about the proposal, and it sounds simply… hilarious. Apparently, it was supposed to be a grand romantic adventure and it turned into a wine-soaked debacle, which is good for us because that’s a more interesting story.

It was Valentine’s Day, usually people are breaking up or having major displays of affection. This one was a good one. We went to dinner and I thought we were going to see some art after dinner, but we pulled up to a helicopter. It was really sweet, he asked me to marry him in a helicopter. Actually, the funny part is, we had champagne in the helicopter and the box was in his pocket and he had written a note with everything he wanted to say in a note you know, to divert, right? He was going to pull (the ring) out while I’m reading it. So I’m reading it, but I’m hearing, like, the champagne is broken, the bottle’s everywhere and I’m still looking at the note because he’s pulling out this box that’s too big for his coat pocket and it rips his coat pocket and his elbow goes into the champagne and I’m, like, “No, I’m just reading the note, I know you’re not doing anything.”

Katy said that when the helicopter landed, her family and friends were waiting to congratulate them so it all worked out and she was very happy. I’m glad it’s the proposal she wanted. I did not want a dramatic or public proposal, mainly because I didn’t want anyone to know I was getting proposed to before me. But if I were to have something over the top, I would definitely have wanted it to go t!ts up like this one. I won’t even start on the logistics of getting an oversized box into a too-small pocket, but could you imagine? All the planning and effort and things start, literally, coming apart at the seams. And I’m just inferring here, but I’d guess Orlando forewent the bended knee because he didn’t want a trouser leg drenched in champagne for the engagement party awaiting them. He’s lucky the ring didn’t go flying out the window. Some bobcat would be running around Malibu Canyon telling hikers she’d just landed Legolas. As for the ring, Katy told Kimmel that she’d “voiced her opinion” on which ring she wanted. Considering how similar it looks to the former Mrs. Bloom’s, one wonders where she got her inspiration.

Katy started the clip talking about In N Out Burger and how she and Orlando originally bonded over it. I wonder of the rest if you get tired of Californians talking about In N Out? I feel like we talk about it way too much, especially since *warning – second controversial opinion* it’s just okay. Our avocados, however, now there’s something to go on about.