Kristen Bell and Dax Shepard Had to 'Work Really, Really Hard' to Find Happily Ever After https://t.co/iRNl5GXMMz

Kristen Bell and Dax Shepard are hustlers who have been talking about their marriage problems for years to get headlines. As I always say, they’re experts at creating content. They just covered Parade Magazine a couple of weeks ago and they’re covering the new issue of People, mostly to promote their baby line with Walmart. In People, they tell a couple of the same stories they gave Parade, about how they met and how they work on their marriage, but they give enough new details to make it reportable. They don’t dump 15 new stories on us like Jada Pinkett Smith and Will, they give about 2-3 for variety and to space it out. We talked about this in our second podcast, it’s from minutes 28 to 31. Here’s People’s first article about this, there will surely be 3-4 more with different details because that’s what People does with cover stories.

“We definitely had to work really hard at being a couple because we’re both incredibly, painfully stubborn, and we’re pretty much opposites,” Shepard, 44, tells PEOPLE exclusively in this week’s cover story, on stands Friday…

“I was like, ‘That’s the best personality I’ve ever seen on a woman. I need to be around it,” recalls Shepard. “I want to be around it when I’m 80, but how?”

The answer was trust and honesty plus “a little couple’s therapy” — and a very meaningful compromise.

Knowing Shepard didn’t believe in marriage, the Bad Moms actress had accepted she would never be his wife.

“He has a great argument that the state having a piece of paper doesn’t mean he’s going to be nice to me and by my side for the rest of my life. [Rather], that is going to be evidenced by how we treat each other and the commitment that we make,” says Bell. “I had surrendered, like ‘Okay, well, I’m never going to get any sort of traditional marriage out of this, and that’s okay because I trust him.’ I really, really trusted him and believed that we were going to go the long haul.”

But Shepard knew how much marriage meant to Bell, and “ultimately, I was like, ‘Well, I’m doing it because my partner wants that,” he explains about proposing in 2009. “Forget the tradition or history of marriage as a concept, you knowing I was doing something that I didn’t want to do because I loved you was a big sign for you.”

After their intimate, courthouse nuptials in 2013, the couple — who often buck tradition — did feel a greater sense of security.

“It just felt more normal. We do a lot of things differently, but there’s a couple things where I’m just like, ‘God, can we not just fall inside the lines once in a while? I want to wear a pretty piece of jewelry. It’s fun!’” explains Bell. “It felt nice afterwards…

“All these movies from the ’80s taught us that it’s love at first sight, and it is supposed to be easy and [that] all you have to do is find that person,” says Bell. “It took me a while to realize, ‘Oh, that was such a lie,’ because things that you work really, really, really hard for always yield the best results.”

The new segments are where they admitted breaking up, although Dax talked about that in a roundabout way on a podcast and Kristen admitted on a talkshow that she used to pick fights and storm out, but they’re putting a different spin on it. Only people who follow gossip slavishly know this, and even forget some of their anecdotes. They also had a different explanation for why they didn’t get married before they did it, because they initially said they weren’t going to marry until it was legal in California for same sex partners. That may have just been how they publicly described it. However Dax did propose in 2009 as People reports, they just waited until after DOMA passed. They’ve talked about how their marriage is work for at least 6 years though. 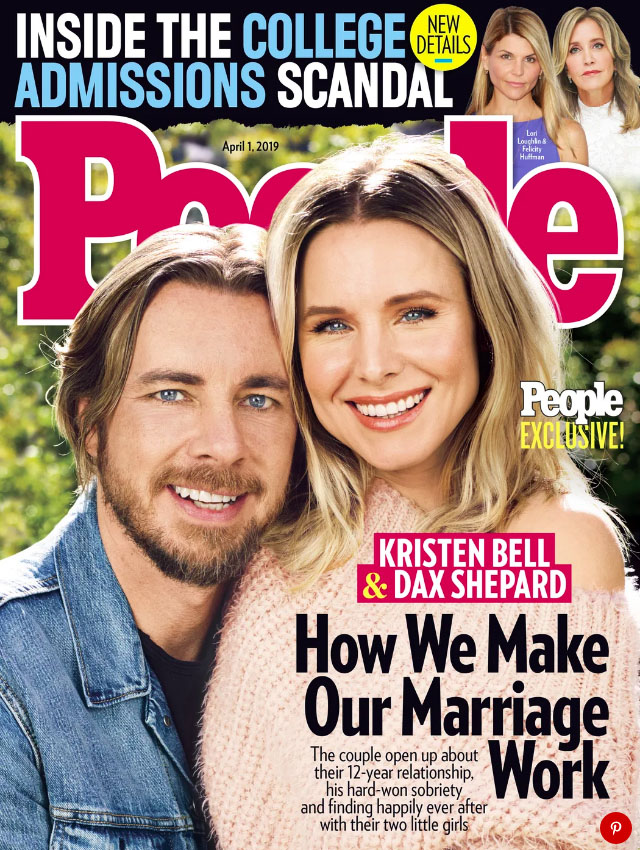 You nailed it @jodiGug3. He cant be bothered. That's why hes the cutest. @daxshepard

55 Responses to “Kristen Bell and Dax Shepard cover People: ‘We definitely had to work really hard’”