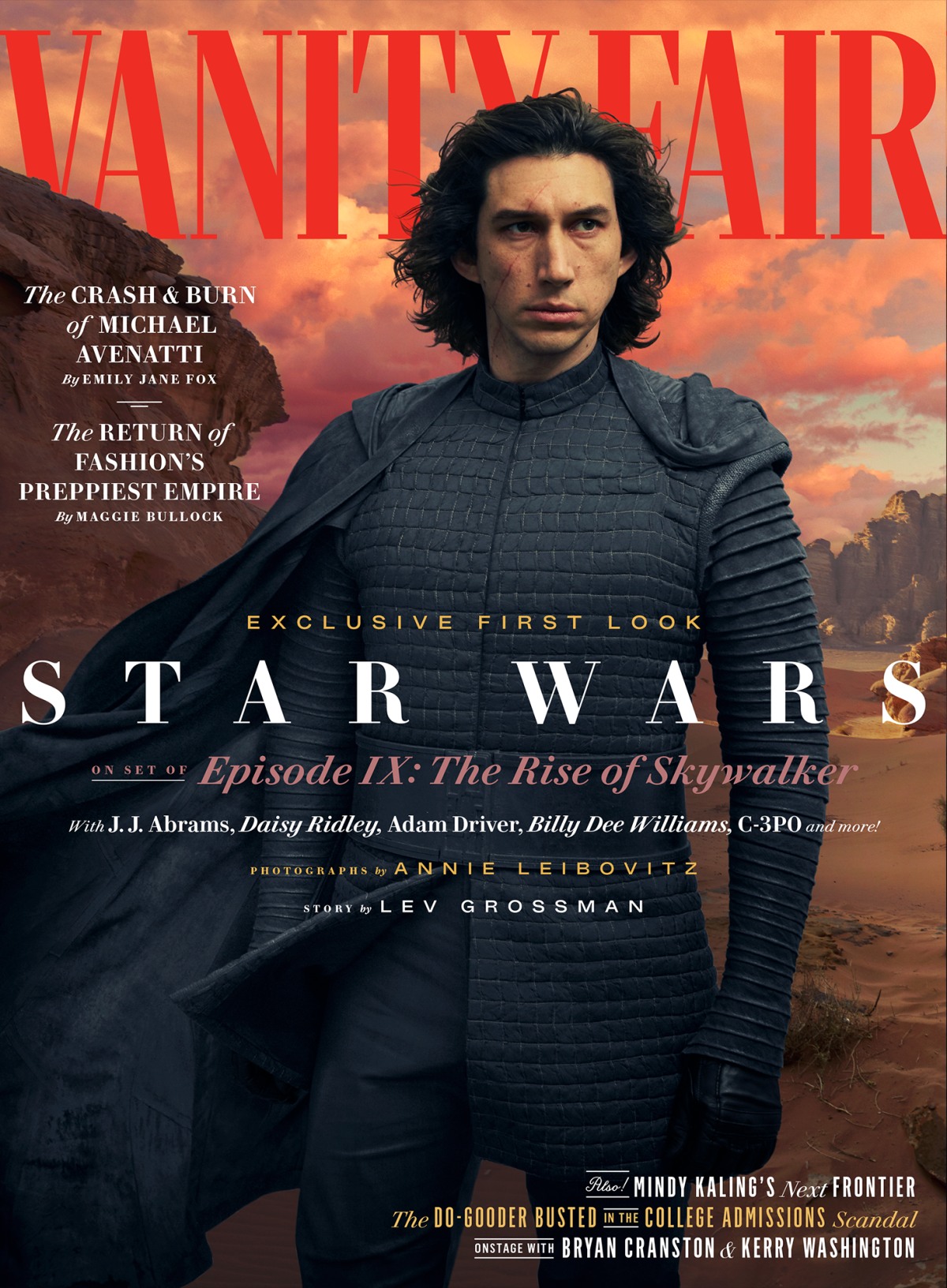 When the first trailer for Star Wars: The Rise of Skywalker came out last month, it took me a second to get situated in the story. I had seen The Last Jedi, of course, and I didn’t really like it, but I had almost immediately forgotten the plot after I saw it. Rey and Kylo did the thing and now Kylo is in charge and he wanted Rey to come with him and she was all NOPE. The plots aren’t making a lot of sense, but still, STAR WARS. We also discussed in that trailer post how Disney realizes they overplayed their hand with Star Wars and completely oversaturated the market. The Rise of Skywalker will be the last Star Wars (or SW adjacent) film for several years. But because it’s still Disney, the hype machine is already in overdrive.

Kylo (Adam Driver) and Rey (Daisy Ridley) cover the new issue of Vanity Fair. They got separate covers, even though I’m sure they’ll be up in each other’s business in the movie. Annie Leibovitz did the exclusive photos on the set, and you can see the full cover story and photo exclusive here at Vanity Fair. The article itself is stuff that even a casual Star Wars fan knows, like the history of the first three films, how George Lucas evolved the idea of a nine-part story. I did find this interesting though:

Where Lucas’s trilogies tended to follow the roots and branches of the Skywalker family tree—their personal saga was the saga of the galaxy writ small—the new movies have a slightly wider aperture and take in a new generation of heroes. There’s Rey, of course, who sources say will have progressed in her training since the end of The Last Jedi to the point where it’s almost complete. With that taken care of, all she has to do is reconstitute the entire Jedi Order from scratch, because as far as we know she’s the Last One.

If Kylo Ren can’t be redeemed it will almost certainly fall to Rey to put him down, in spite of their maybe-bond. Their relationship is the closest thing the new trilogy has to a star-crossed love story on the order of Han and Leia: a source close to the movie says that their Force-connection will turn out to run even deeper than we thought. They’re uniquely suited to understand each other, but at the same time they are in every way each other’s inverse, down to Kylo’s perverse rejection of his family, which is the one thing Rey craves most. “I think there’s a part of Rey that’s like, dude, you f–king had it all, you had it all,” Ridley says. “That was always a big question during filming: you had it all and you let it go.”

Rey is also, according to totally unsubstantiated Internet theories, a leading candidate to be the Skywalker of the title, pending some kind of head-snapping reveal about her ancestry. (For the record, the other leading unsubstantiated Internet theory has the “Skywalker” of the title referring to an entirely new order of Force users who will rise up and replace the Jedi.)

VF doesn’t end up getting any kind of confirmation on whether we’ll even find out anything about Rey’s background in the end, but surely they have to do something with that? They can’t just leave it at “her parents were nobodies but look, she has this intense connection out of nowhere with Kylo Ren”? I get that the Force can come out of nowhere and some people are born with it and some aren’t, but we’ve also seen that it’s hereditary too. I don’t know. It upsets me to think that they’re building up this Kylo/Rey twinship/connection and there won’t be a hard answer as to WHY. 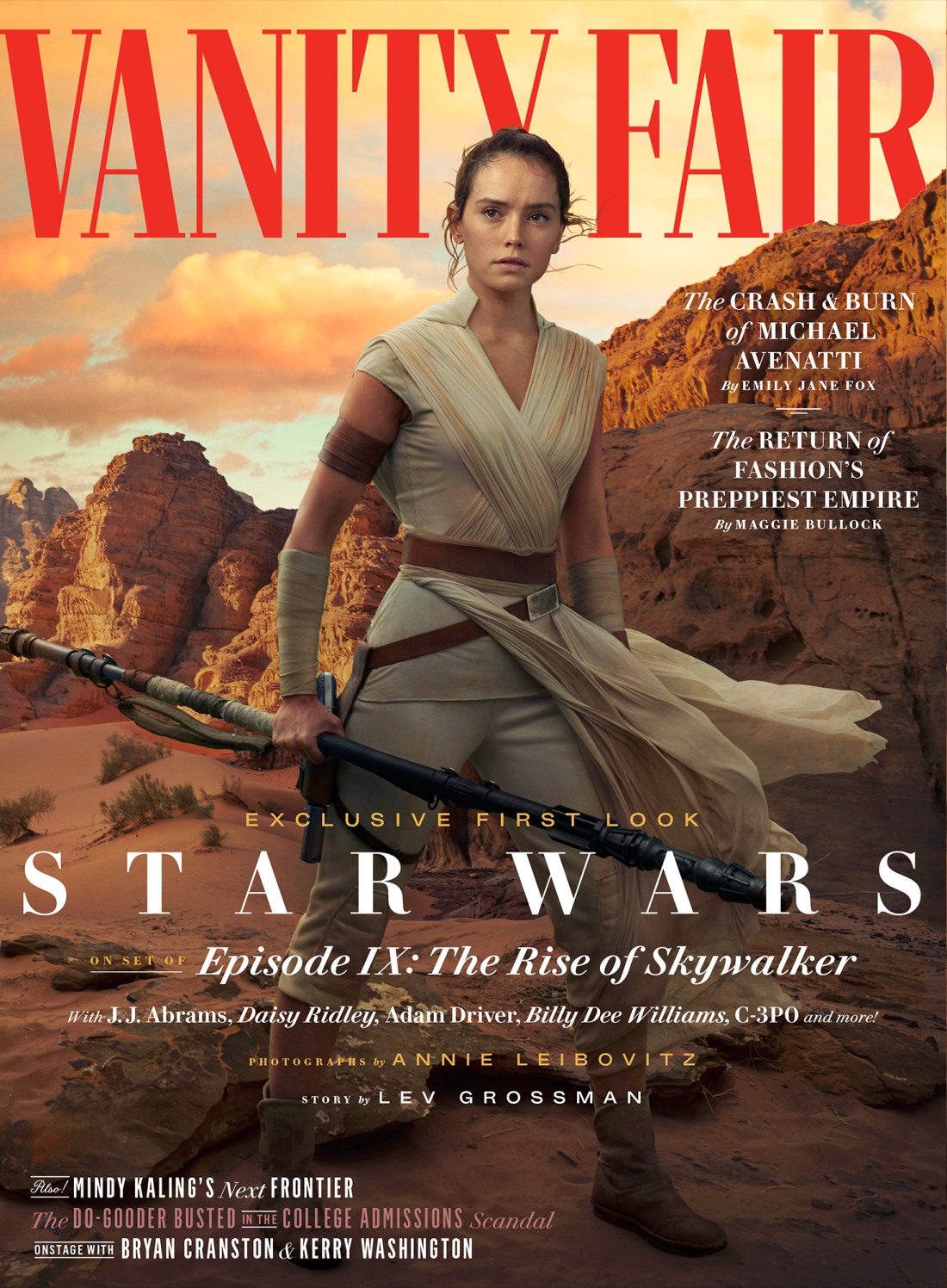