Miley Cyrus: Millennials ‘don’t want to reproduce’ because of the environment 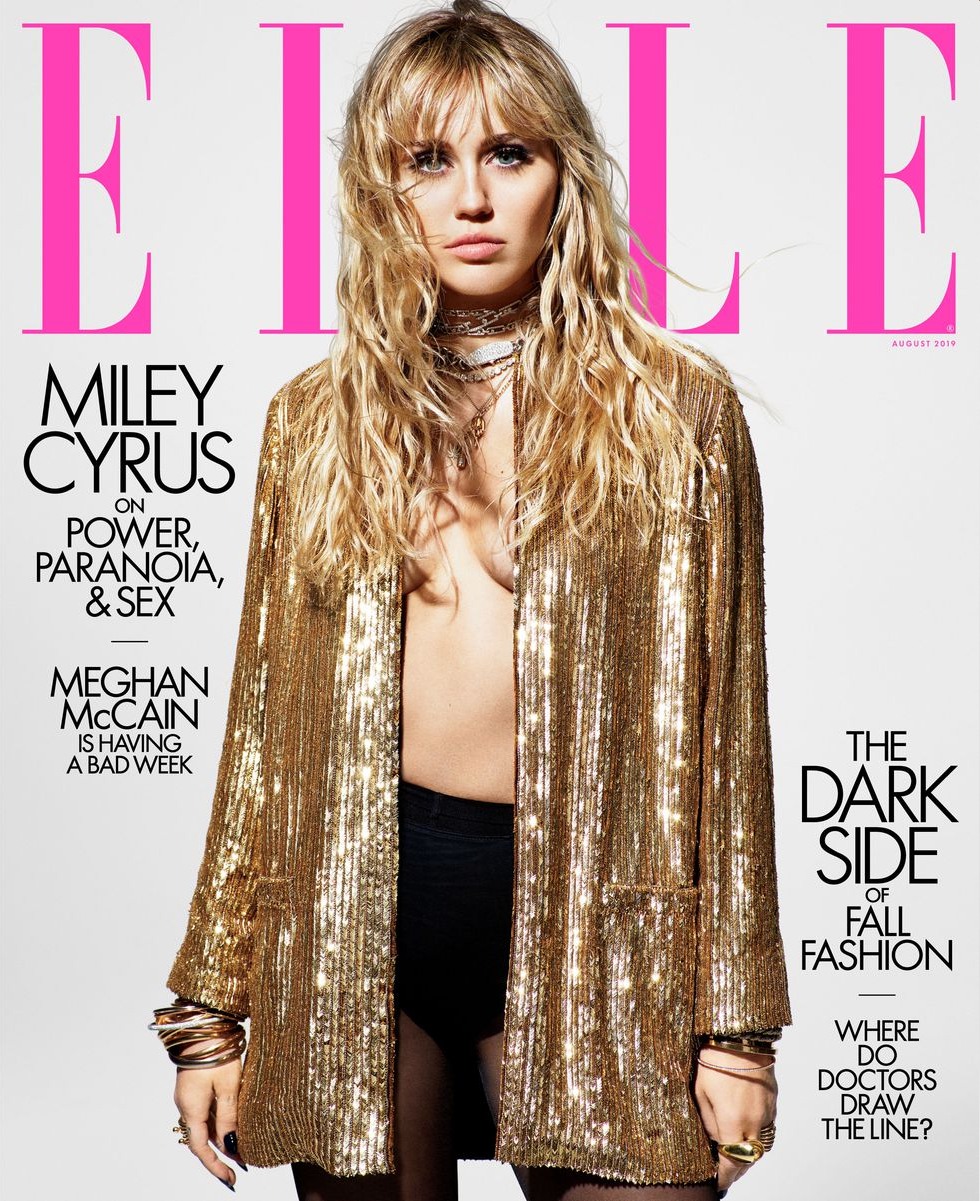 Miley Cyrus has been so many things and tried to be so controversial and at the end of the day, it’s kind of funny that she’s just turned into a basic pop star making mediocre music, married to a traditionally handsome dude and living a relatively easy life. Miley covers the latest issue of Elle to promote her latest album, and Miley’s been trying and failing to stir some old-school beefs or something to promote the music, which is probably why Nicki Minaj shut that sh-t down and called Miley a Perdue Chicken. So, Miley is back to trying to have a conversation about queerness and non-binary identities and… it’s just a lot. Obviously, I believe Miley talks out of both sides of her mouth on so many issues, and I also believes she paints herself as an aggrieved victim of bigotry, which really… she’s just a mediocre, average, basic person. You can read the Elle piece here. Some highlights:

The new album: “My record is called She Is Miley Cyrus. ‘She’ does not represent a gender. She is not just a woman. ‘She’ doesn’t refer to a vagina. She is a force of nature. She is power. She can be anything you want to be, therefore, she is everything. She is the super she. She is the she-ro. She is the She-E-O…. she/woman is taking back the power. She is here, fierce femme energy.”

On women: “We’re expected to keep the planet populated. And when that isn’t a part of our plan or our purpose, there is so much judgment and anger that they try to make and change laws to force it upon you—even if you become pregnant in a violent situation. If you don’t want children, people feel sorry for you, like you’re a cold, heartless bitch who’s not capable of love.”

She hates the word “selfish”: “Why are we trained that love means putting yourself second and those you love first? If you love yourself, then what? You come first.”

She’s been thinking a lot about women’s bodily autonomy.  “Yeah, too much. I’m such an over-thinker. But at this time of my life, I feel the most powerful I’ve ever felt. I like the way being sexual makes me feel, but I’m never performing for men. They shouldn’t compliment themselves to think that the decisions I’m making in my career would have anything to do with them getting pleasure. I don’t think that because some guy thinks I’m hot he’s going to buy my record. It doesn’t help me.

Being bisexual and married to a man: “I think it’s very confusing to people that I’m married. But my relationship is unique. And I don’t know that I would ever publicly allow people in there because it’s so complex, and modern, and new that I don’t think we’re in a place where people would get it. I mean, do people really think that I’m at home in a f–king apron cooking dinner? I’m in a hetero relationship, but I still am very sexually attracted to women. People become vegetarian for health reasons, but bacon is still f–king good, and I know that. I made a partner decision. This is the person I feel has my back the most. I definitely don’t fit into a stereotypical wife role. I don’t even like that word.

Women & mother nature are angry: “The earth is angry. We’ve been doing the same thing to the earth that we do to women. We just take and take and expect it to keep producing. And it’s exhausted. It can’t produce. We’re getting handed a piece-of-sh-t planet, and I refuse to hand that down to my child. Until I feel like my kid would live on an earth with fish in the water, I’m not bringing in another person to deal with that.  We [Millennials] don’t want to reproduce because we know that the earth can’t handle it.

I think the whole “Millennials don’t want to have babies because of the environment” thing is interesting, because I’ve actually heard anecdotal stories to suggest that there is a lowkey feeling among the under-30 crowd. The idea being, the planet is f–ked and why would you bring more people into it? Which I get, and I feel similarly (though I’m not a Millennial).

The funniest part of the full interview is when she’s asked about her dad turning up for Lil Nas X’s “Old Country Road” and she compliments her dad and seamlessly changes the subject to herself and how hardcore SHE is too. She can’t even give her dad a moment to shine.

173 Responses to “Miley Cyrus: Millennials ‘don’t want to reproduce’ because of the environment”