Jason Momoa’s surprise appearance on SNL was everything 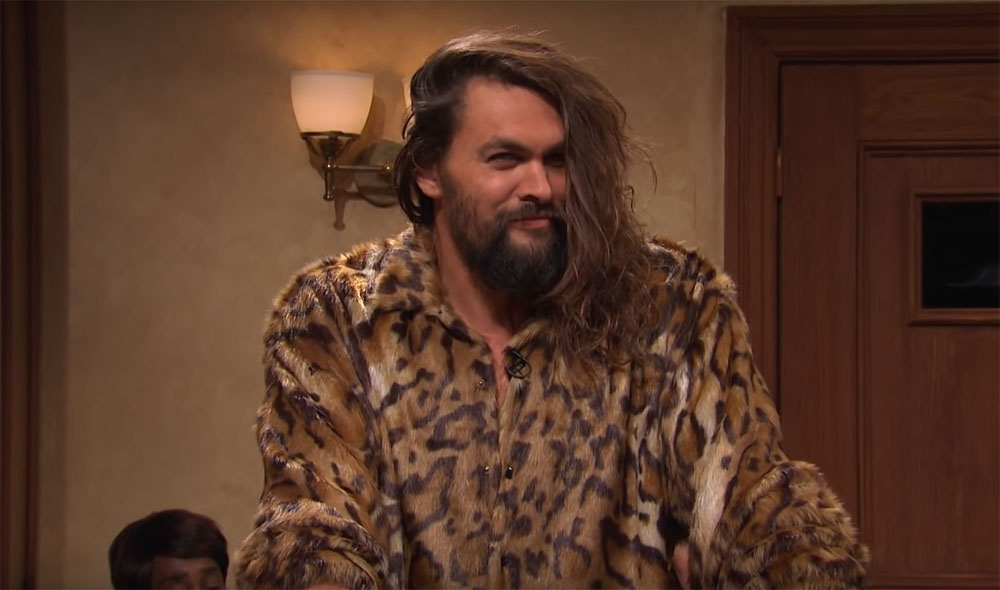 Jason Momoa has been dedicating himself to the serious work of supporting protesters at Mauna Kea and addressing the UN to issue warnings about the threats that climate change poses to island nations. Jason still has time to have some fun, though. He popped up in a surprise cameo on the October 26 episode of Saturday Night Live, and the audience went bonkers.

Chance the Rapper, who was the episode’s host and musical guest, played Judge Barry, presiding over the First Impressions Court. He would issue verdicts within 10 seconds of looking at either the plaintiff or the defendant. The last case involved an elderly woman, Gladys Feldeman (Kate McKinnon, who entered “the courtroom” to applause and cheers), who was suing her former live-in nurse for theft. Enter Mamoa, “Apollo Benz,” wearing a leopard-print button-down shirt (which he would later open), and tossing his hair. Here’s the clip queued up to that part.

Jason has posted twice on Instagram about it, with a ton of photos and videos (many of him displaying those chandelier earrings).

I LOVE @nbcsnl watch tonight @chancetherapper is amazing. Love u cast and crew forever so stoked to be invited back. Aloha j

As good as it gets for me. @nbcsnl The greatest show on earth I will always be a fan love to the amazing crew and cast I’m so grateful. Aloha j

(I love the photo in the second post of him posing behind Kenan Thompson.) “Now listen, your hombre” Jason also introduced Chance the Rapper’s second performance, Handsome, you can see that here. This was a perfectly executed cameo, and it was obvious that Jason was having a lot of fun with it, even if he was a bit nervous. He’s been invited back, too! (He hosted last December.) Perhaps Apollo will make another appearance! He and Gladys have reconciled; he’s returned her money, and they’ve relocated to an island where they protest climate change in their spare time.