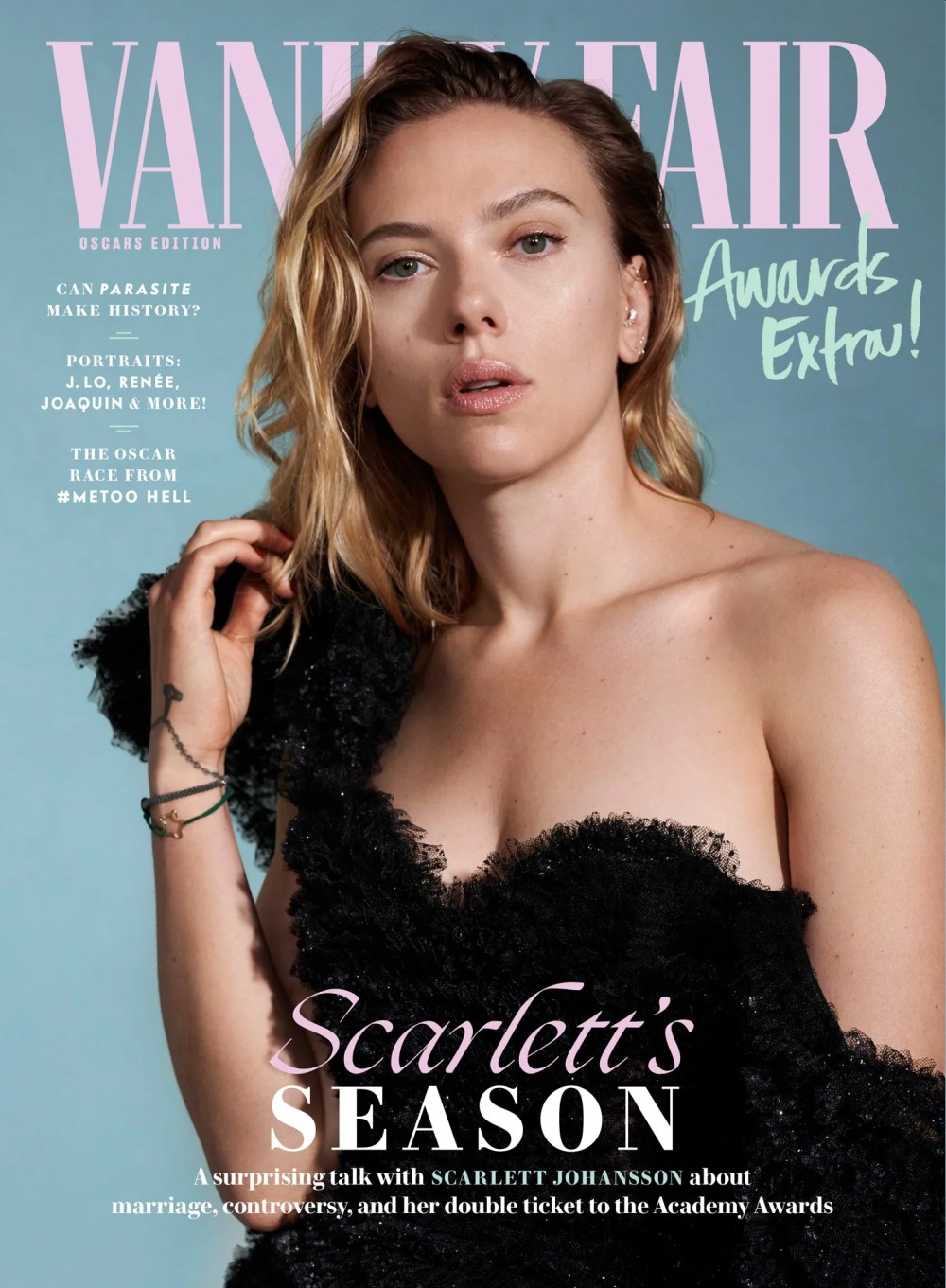 Scarlett Johansson covers the Vanity Fair “Awards Season” supplemental cover, because it’s very likely that ScarJo will be getting her very first Oscar nomination this season for Marriage Story. And maybe JoJo Rabbit, although I think that’s more of an outside chance. We’ve spoken about this before, it’s really looking like ScarJo’s biggest competition for Best Actress would be Renee Zellweger’s Judy Garland drag. Who will Oscar voters choose if it’s between Renee and Scarlett? I really don’t know. Part of me believes that those old Academy voters probably love Scarlett. Part of me believes that Scarlett has said too many stupid things to really be a viable Oscar contender though – like her Woody Allen comments, or how she insists that she should be free to play any race, any gender, any tree. I bring those up because wouldn’t you know, VF gave Scarlett the chance to speak in greater depth about that stuff, and she tried to clean up her own mess. Some highlights from this VF interview:

Motherhood helped her understand Marriage Story: “What would have been different is if I hadn’t been a mom. That was actually more valuable to me than the experience of going through a divorce. Because I never actually went through the kind of divorce that’s portrayed in the film. Yes, of course, part of the film is about the system of divorce, or the business of divorce, and how f–ked up it is, but that was Noah’s experience more than mine. But the experience of being a mother was very helpful, and it was a great tool…. You know, understanding what it is to co-parent—that’s a very specific thing. It’s hard to raise a child with someone you’re no longer with. It’s hard. It’s not probably how it’s ‘supposed to be’—in quotes—or whatever…. But, you know, I think my ex and I do it as well as we can. You have to prioritize your child and not put yourself in the middle. It has its challenges.”

She really wants to get marriage right with Colin Jost: “The idea of building a family, making a family, and having that work, I like that idea. I think that would be wonderful. I’ve always wanted that. I wanted that also in my marriage to my daughter’s father as well. It just wasn’t the right person. But I like that idea…. I mean, the first time I got married I was 23 years old. I didn’t really have an understanding of marriage. Maybe I kind of romanticized it, I think, in a way. It’s a different part of my life now. I feel like I’m in a place in my life, I feel I’m able to make more active choices. I’m more present, I think, than I’ve been before.”

On her previous comments defending Woody Allen: “I’m not a politician, and I can’t lie about the way I feel about things. I don’t have that. It’s just not a part of my personality. I don’t want to have to edit myself, or temper what I think or say. I can’t live that way. It’s just not me. And also I think that when you have that kind of integrity, it’s going to probably rub people, some people, the wrong way. And that’s kind of par for the course, I guess…. “

Whether she’s ever changed her mind about defending Woody: “I don’t know—I feel the way I feel about it. It’s my experience. I don’t know any more than any other person knows. I only have a close proximity with Woody…he’s a friend of mine. But I have no other insight other than my relationship with him.”

Whether she’s considered that, by defending Woody, she’s telling victims that she doesn’t believe them: “Yeah… I do understand how that is triggering for some people. But just because I believe my friend does not mean that I don’t support women, believe women. I think you have to take it on a case-by-case basis. You can’t have this blanket statement—I don’t believe that. But that’s my personal belief. That’s how I feel.”

Her statements about playing a transgender character in Rub & Tug: “In hindsight, I mishandled that situation. I was not sensitive, my initial reaction to it. I wasn’t totally aware of how the trans community felt about those three actors playing—and how they felt in general about cis actors playing—transgender people. I wasn’t aware of that conversation—I was uneducated. So I learned a lot through that process. I misjudged that…. It was a hard time. It was like a whirlwind. I felt terribly about it. To feel like you’re kind of tone-deaf to something is not a good feeling.” I point out how there’s a danger that people will read that—about how horrible it is to feel tone-deaf—and refer it back to the conversation about Woody Allen…. “Yes, they will,” she says. “It feels like a snake eating its tail, doesn’t it?”

“… And also I think that when you have that kind of integrity, it’s going to probably rub people, some people, the wrong way…” That’s a Goop-level brag right there, to defend your previous statements in which you caped for a child molester and then PRAISE YOURSELF for having integrity for… not listening to the counter-arguments for why should actually climb out of your own ass for a moment and listen to a victim’s statement. All that being said, Scarlett just refuses to back down from her position on Woody Allen, and clearly, no one is going to change her mind. It will be an interesting case study for Oscar campaigns in the future, and we’ll get to see how it plays out in real time. I’m not expecting her to back down. If anything, I suspect she’ll double-down on her Woody-love several times before the Oscars. 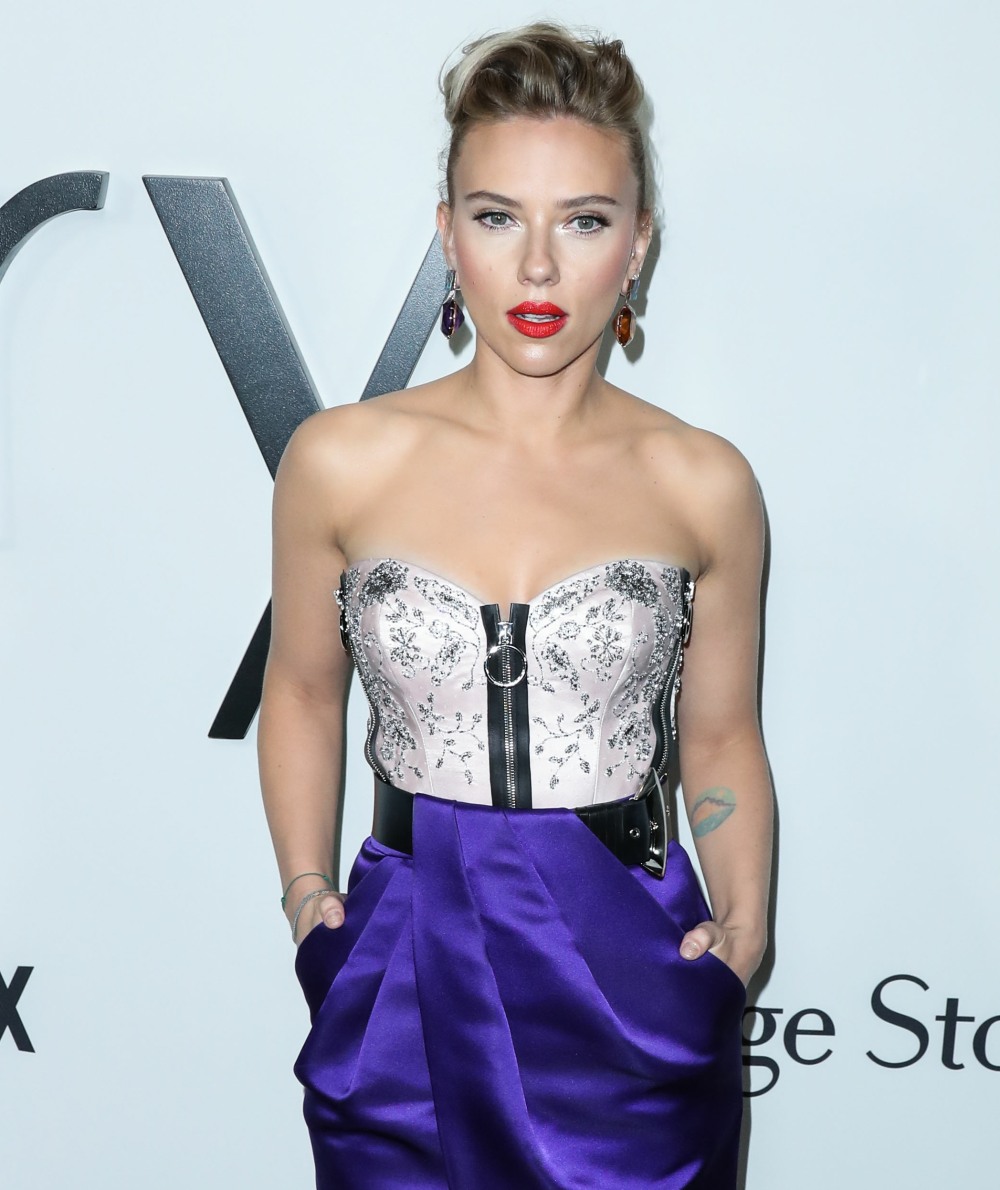