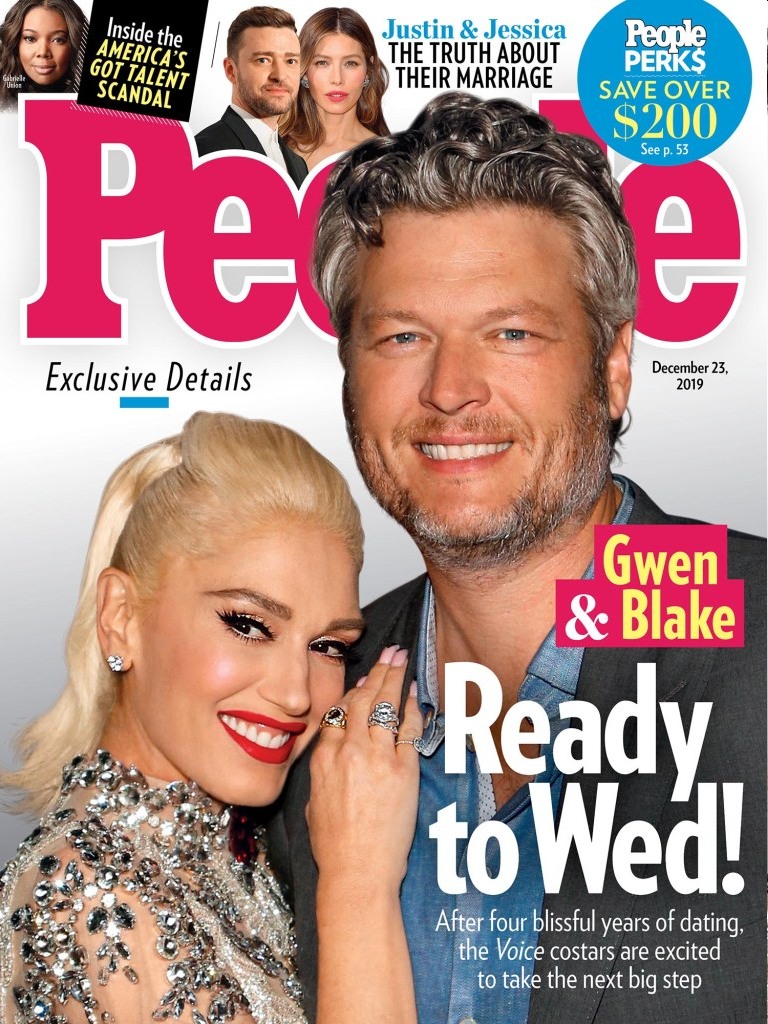 I’m an idiot for not figuring this out yesterday, but Blake Shelton and Gwen Stefani are on the cover of People Magazine this week because Blake has a new album! His album drops on Friday. That’s why People Mag is talking about his relationship with Gwen and why they haven’t gotten married yet. It’s all album promotion and marketing towards religious peeps. Blake is with a nice Catholic girl who refuses to marry him until her first marriage is annulled. But in the meantime, Blake is the best stepfather to Gwen’s three sons. Which… I actually believe. I’ve always believed that Blake really adores having three growing boys around and he loves taking Gwen and her sons to Oklahoma where he has an excuse to be a big kid too.

Blake Shelton is just as in love with Gwen Stefani’s three sons as he is with his girlfriend of four years. The country star, whose latest album God’s Country: Fully Loaded drops Friday, has become an extra dad to Kingston, 13, Zuma, 11, and Apollo, 5, multiple sources tell PEOPLE exclusively in its latest cover story. While staying respectful of Stefani’s ex Gavin Rossdale’s role as their father, Shelton, 43, has also had a large part in raising the boys over the last few years.

“He’s so fun and has shown Gwen’s kids another side of life filled with adventure,” says a friend of the Voice coaches, who often head to Shelton’s ranch in Tishomingo, Oklahoma, on weekends and school breaks. “The boys have really grown immensely by spending time with Blake.” Bringing joy and laughter into their lives, Shelton is also more than happy to shoulder more responsibilities.

“He is a good dad, actually,” Stefani, 50, who teamed up with her beau for a new duet called “Nobody but You” (featured on his album out Friday), said earlier this year on the Today show. “He’s been helping me out a lot. I literally get to the point where I’m like, ‘You gotta get home—I need help!’ It’s hard. I got three boys.”

Early on in their relationship, Stefani and Shelton’s loved ones quickly became “one big family,” and over the holidays the couple and their extended family will head to Oklahoma for their annual holiday get-together. “They’re all very like-minded and comfortable with each other,” says the friend.

Often vocal about how Shelton “saved” her after heartbreak, Stefani’s life has indeed transformed after unexpectedly finding lasting love with the singer. “She is much more relaxed and enjoys life more,” says a Stefani insider. “Gwen has changed a lot since she met Blake, and it’s all for the better.”

“While staying respectful of Stefani’s ex Gavin Rossdale’s role as their father…” That’s what I wonder about. For all of Gavin’s faults and shenanigans, he’s always seemed like a hands-on father who adores his kids. So I do wonder if there’s more to the story about how Gavin feels about Blake spending so much time with the boys. I also think it’s sort of funny that Blake is being positioned as a “fun dad” who does all of these “boy things” with the kids, while… we never really hear about that stuff on Gavin’s side. Anyway, buy Blake’s album because he adores his age-appropriate divorced Catholic girlfriend and he’s a great stepfather figure to her three sons. Boom.

16 Responses to “Blake Shelton loves Gwen Stefani’s sons, he’s ‘had a large part in raising’ them”