Kourtney Kardashian criticized for getting a second dog for Christmas

But what should we name her?


As preparation for this story, I googled “Kardashian pets” to see how many pets the various sisters and their families have. One of the suggested searches was “Kardashian pets disappear,” so this is a thing! The Daily Beast has a whole investigative article, published this summer, about the history of the Kardashian pets as seen on their show and social media. One of the plotlines on KUWTK involved a hamster that Khloe gave North which had died. Instead of telling North, 6, that her hamster passed, Kim just found a lookalike and acted like nothing happened. (Although I would chose to be honest to my child, I still hear about Squeaky’s demise occasionally so I understand that decision.)

Journalist Jordan Julian determined that the Kardashians have owned over 40 pets, many of whom were seen or featured briefly and then “mysteriously disappeared.” This sounds ominous, but I don’t think it’s “starving chihuahua in a closet”-level bad, I think they gave them away to friends and staff and didn’t want the negative publicity. We know that Kim gave away one cat, it sadly passed shortly after, and that Kylie and Kendall lost a chihuahua to a coyote attack. (My girl Hecate’s sweet cat got taken by a coyote! I don’t envy you pet owners in California.) The fate of so many other pets isn’t as clear. As Julian points out, Kylie seems to be the most responsible dog mom in the family, although that bar is set quite low. What about Kourtney though? Kourtney posted the photo above with the adorable new golden retriever puppy her family got for Christmas. Commenters were quick to ask what happened to their other dog, the Pomeranian Honey, which was given in Penelope in 2017. Kourtney shut that down:

Let the records show that Kourtney Kardashian is still in possession of her cute Pomeranian Honey.

For some reason, people began questioning the whereabouts of the fluffy pup after Kourtney, her kids and Scott Disickcame into the possession of a new golden retriever on Christmas morning. “WTF where’s honey,” numerous people asked on a photo of the new golden retriever, which was captioned, “But what should we name her?”

Others weren’t necessarily questioning where the dog was, but making heinous accusations. One person on social media slammed the mother-of-three for getting another pet only to “throw them out in 3 months.”

But fear not, because the Poosh creator is setting the record straight once and for all. In a response to the critics, the 40-year-old shared, “Of course we still have Honey, our baby Pom Pom.”

Kourtney also made it clear she wasn’t going to put up with the cruel accusations. When one person suggested she name the dog “temporary since you never keep your dogs,” the mom snapped.

“Wow so much negativity. we still have Honey, but thanks for your assumptions,” she retorted. “I’ll assume Santa wasn’t good to you, hence your vibes.” Unclear if Santa was good to the critic or not, but it’s safe to say Kourtney shut them down.

Coming into this story I thought “wow people are jerks for criticizing a family for getting a second dog,” but after I saw all the articles about it I understood! It’s not about Kourtney and Scott as much as the Kardashian family’s well documented history of using pets as props. Plus, they post so much on social media but don’t feature their pets as much as other celebrities. That said, this dog is adorable! I really hope we see more of her and that she’s cherished by this family. If not, I’m sure there are other families who would love to adopt her. 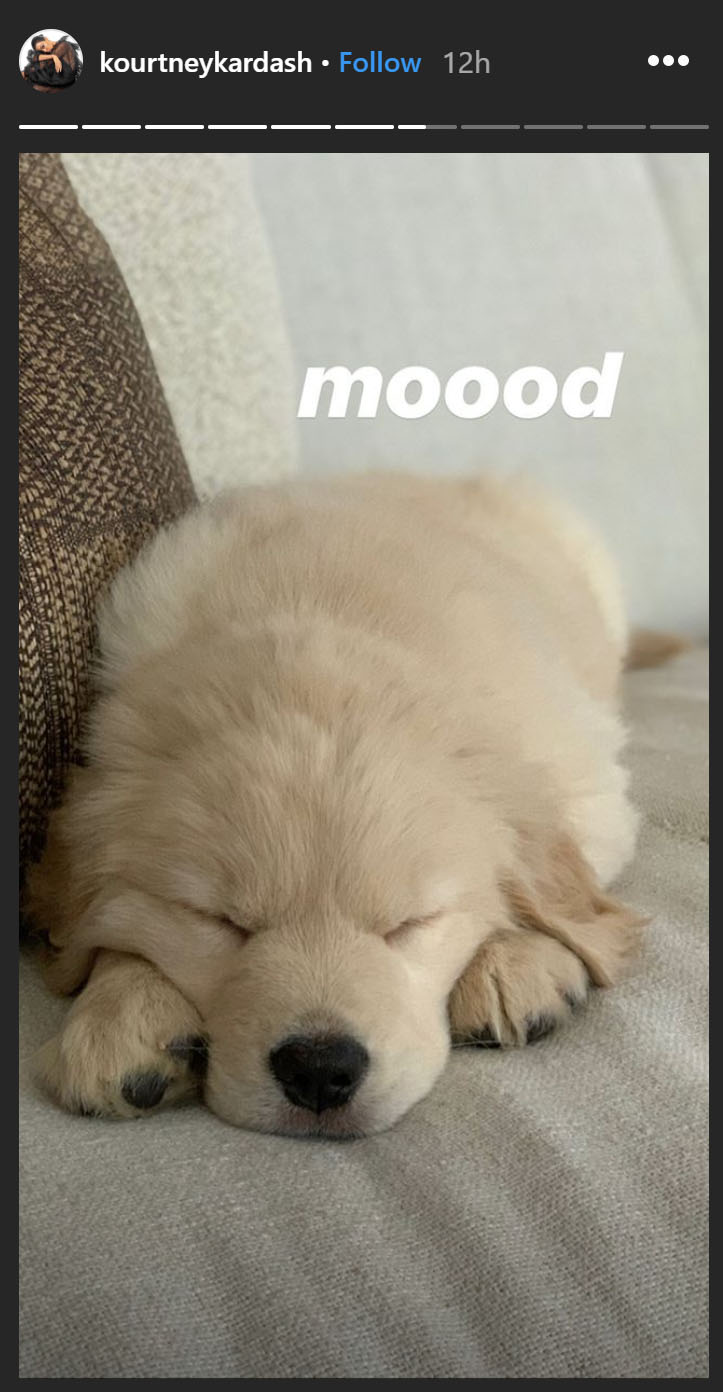