Jane Fonda: I can’t pretend I’m not vain, but I’m not getting any more plastic surgery 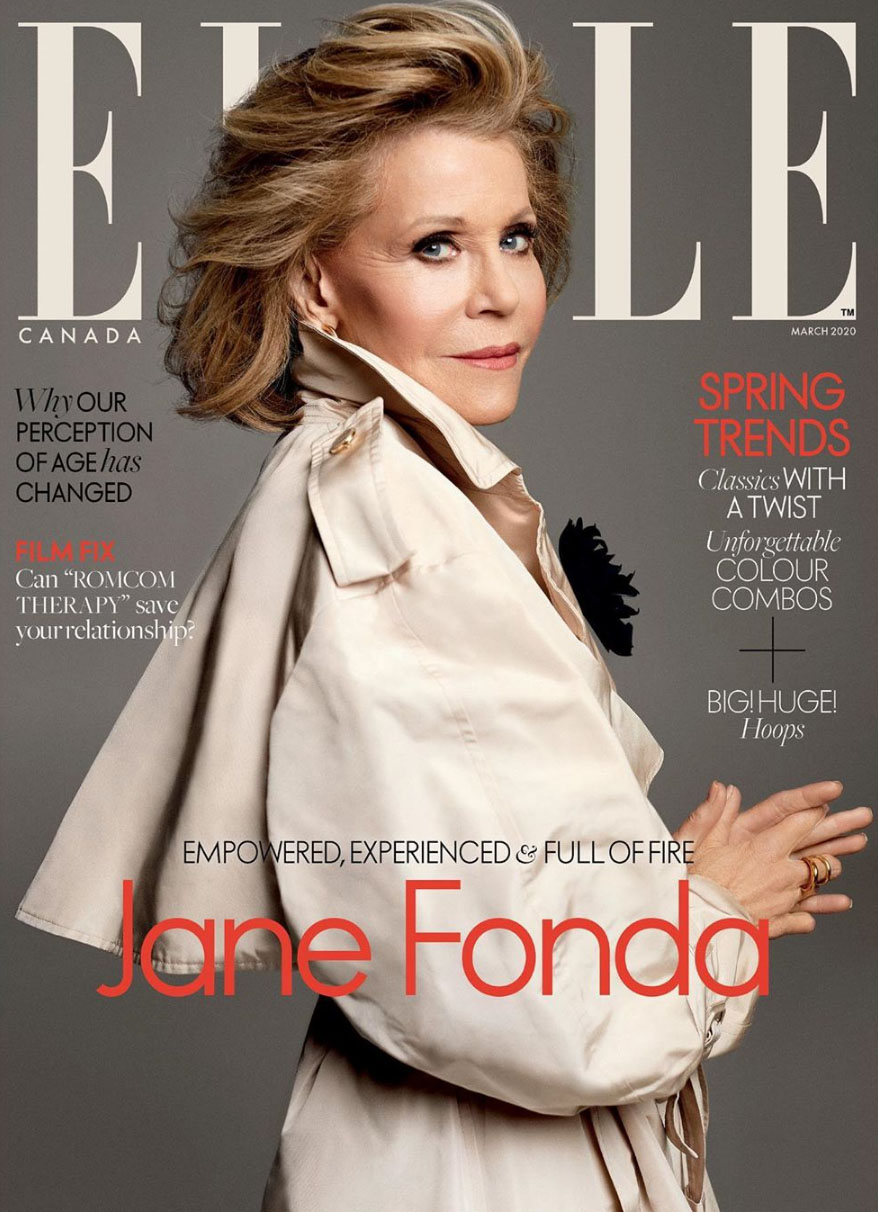 Remember when Megyn Kelly asked Jane Fonda about her plastic surgery during an on-air interview with Robert Redford? Jane shut Megyn down and made it clear that it wasn’t the time or place for that topic. About two months later Megyn brought up Jane’s Vietnam activism as evidence that Jane wasn’t a good person or something. Megyn just wanted to fuel headlines for relevance. Her talk show was eventually canceled about a year later after she defended blackface and also because her ratings were bad. Jane will talk about her plastic surgery, but on her terms. She’s been open about it for years, and now she says she’s done with it. Jane is getting headlines for telling Elle Canada that she’s done cutting herself up (her words). The piece is lengthy and sycophantic but Jane sort-of warrants that kind of lead up. She’s a phenomenal woman. Plus it’s possible the interview was brief and they needed filler. Here’s some of what she said.

On people praising her as a legend
“Total facade,” she says, brushing off the acclaim. “I hate it because it is so uncomfortable.”

On plastic surgery
“I can’t pretend that I’m not vain, but there isn’t going to be any more plastic surgery—I’m not going to cut myself up anymore. I have to work every day to be self-accepting; it doesn’t come easy to me.”

On her bulimia
“I try to make it very clear that it has been a long and continuing struggle for me. I post pictures of me looking haggard—and once with my tooth out! This is a fake tooth,” she taps at an incisor. “It came out in a restaurant in Portugal, and I posted it.”

On choosing to be single
Each time a relationship ended, she says, “I thought, ‘Well, that will be the end for me because no one’s going to want to be with me or talk to me if I’m not with him.’” The disease to please, she says, left her empty. Her singleness now is very much a conscious choice: She is dedicating this chapter of her life to herself. She repeats what has become her favourite interview zinger: “I’ve closed up shop down there.”

On her friends
“The people who tend to really show up for me—and whom I show up for—are my women friends. I grew up in the ’50s, and on top of that my mother killed herself, so I totally identified with men, which meant rugged individualism, so it was very hard for me to overcome that…

“I grew up at a time when the thinking was that women were like cats, competing with each other, knocking each other down. But, in fact, there is no limit to what we can accomplish if we work together.”

I really like how she described her friends, and I feel the same. They really show up for me and support me. Jane also talked about how hard it must be to be a young person growing up in these uncertain times, and she recognized her privilege as a wealthy white woman, which is something she’s done many times before and is appreciated. As for her swearing off plastic surgery, I mean she’s 82 and she looks amazing. I will absolutely get plastic surgery in my 50s or 60s and I hope I’m judicious with it like Jane and that it settles and doesn’t give me that LA face. I get the feeling she’s saying this for herself as much as everyone else. Like sometimes I tell people I’m not eating sugar anymore but I know I’m still going to do it. I’m not saying she is going to get more plastic surgery! It just sounds like one of those things you declare so you keep yourself accountable.

Oh and Megyn Kelly had to chime in on this because of course she did.

“When you’re young, you are thinking: Who am I supposed to know? What am I supposed to do?” says #JaneFonda. And the climate crisis is always on her mind. “There is so much uncertainty now. It is 100 times worse than when I was a young person. And for me, those were not the good old days at all. It was very fraught,” she adds, raising her eyebrows to nod to that understatement. “And yet, I’m white and privileged, so for people of colour, gay people, physically challenged people, it is all so much harder.” Read the full March issue cover story now on ELLECanada.com.

“The people who tend to really show up for me—and whom I show up for—are my women friends,” says Fonda. Read the full interview with our March issue cover star now on ELLECanada.com. #ELLECanada #JaneFonda

22 Responses to “Jane Fonda: I can’t pretend I’m not vain, but I’m not getting any more plastic surgery”