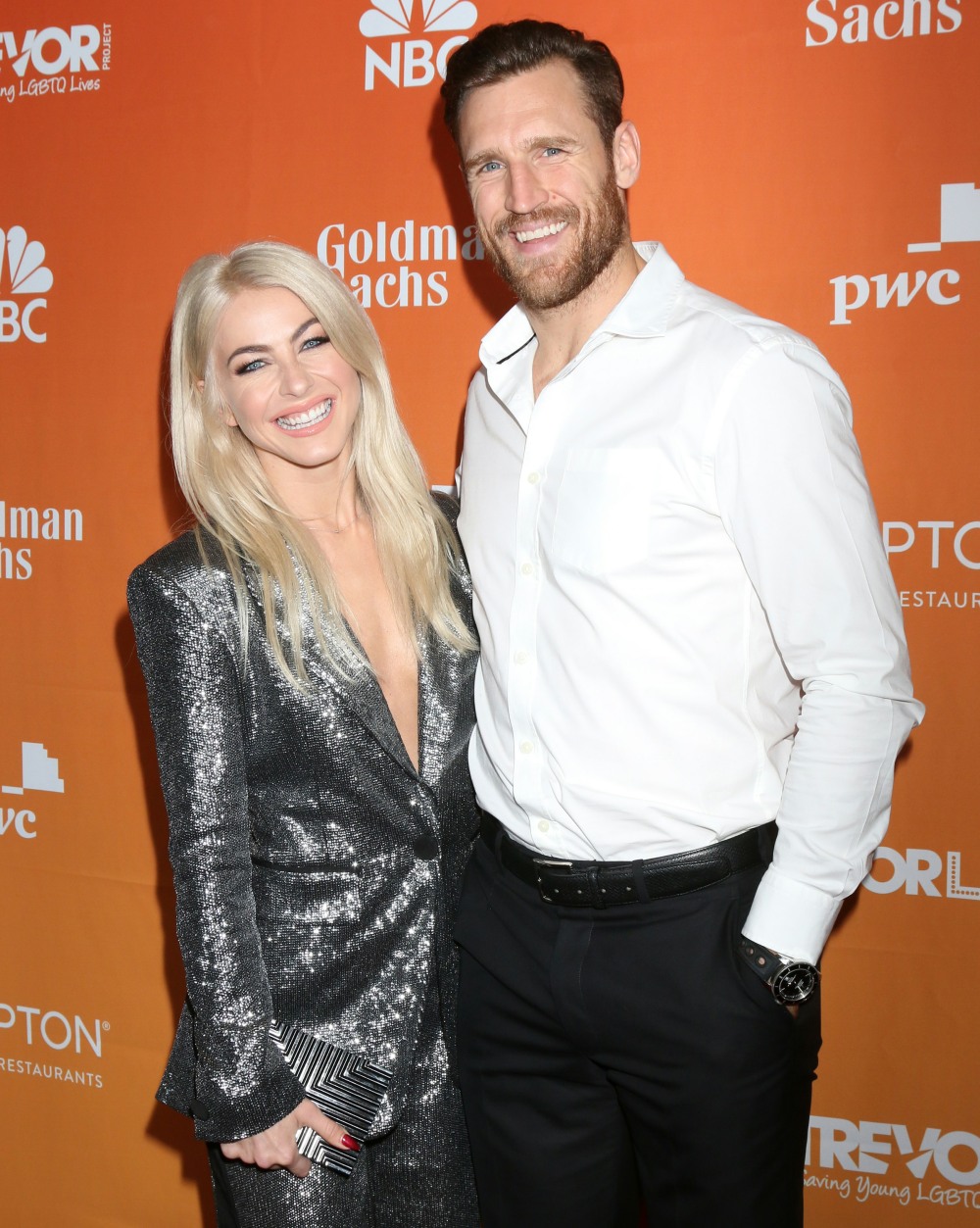 In 2019, in a magazine interview, Julianne Hough suddenly revealed that she was, in her words, “not straight.” That was apparently what she told her husband Brooks Laich. At the time, Julianne and Brooks were a cute couple and I thought they were probably pretty white-bread Instagram-inspo. Turns out, that magazine interview was seemingly the first step in their journey to understand their own individual sexualities better, and months later, it definitely sounded like their marriage was struggling. I still don’t know exactly what happened between them, only that their separate interviews made it sound like they were taking time apart (but staying married). Then the pandemic happened. And now Brooks is isolating with a dog in Idaho while Julianne isolates by herself in LA.

Brooks Laich is living in isolation — and loving it. During the latest episode of his iHeartRadio podcast, How Men Think, the ice hockey player opened up about escaping to Idaho during the coronavirus pandemic. His wife Julianne Hough is still in Los Angeles, but Laich brought along the couple’s husky, Koda.

“Koda is awesome, man. I’m up in Idaho, I’m at my house in Idaho,” said Laich, 36. “I spend all day outside. I’m outside from like, 7:30 until 5 o’clock. I have 10-and-a-half acres here. Our property’s pretty big and I’ve just been doing a mass cleaning of it. Like, everything. Building some rock walls, chainsawing down some trees, clearing brush, you name it. I have some trees out here, some tall pine trees — the road that comes in here is actually called Tall Pines,” he added. “We have some probably 100-ft. trees.”

Koda couldn’t be happier with the environment, Laich said. “Koda’s been after moose … he was munching on a deer skull the other day,” he said. “There’s got to be some sort of wolf in him. It’s been great.”

And Laich himself said he’s actually “doing okay with the isolation. I’m about 15 minutes out of town. I have one neighbor that lives a couple hundred yards away, and then another neighbor that lives another couple hundred yards away, and that’s all that’s out here,” he said. “I see them when they walk their dogs a little bit, but don’t see them much. We’re practicing social distancing, but I’ve been good with the isolation. I think I’m an introvert by nature. I love having my dog — if it wasn’t for my dog, I’d probably be a little more antsy with the isolation.”

Let me just say, isolating with pets is pretty great. You don’t have to worry about a partner’s emotional needs or drama, and you can just focus on your own sh-t and your animals. Anyway, after Brooks talked about that on his podcast, Julianne had to chime in with how *she* is doing, because there is some subtle one-upmanship between them:

Julianne Hough is enjoying her time self-distancing amid coronavirus while her husband Brooks Laich does the same in Idaho. Hough, 31, opened up about her experience social distancing in California, telling Oprah Magazine‘s Arianna Davis, “I’m really enjoying this time where I can connect to what’s really important in my life.”

“Being on tour for three months and traveling and starting a business … it’s a lot. So to be able to be home, and stop and pause, and look inward, and connect back to myself has been glorious. I’ve been on my own,” Hough told Oprah Magazine. “My husband is in Idaho doing lots of yard work… and so we’re kind of doing our separate things right now. But it’s really been a magical time,” Hough continued. While Hough is soaking up the quality time she gets to spend with herself, she admitted to Oprah Magazine that she does “feel alone” while away from her husband and shared “I miss people a lot.”

“I think in my 30’s, I’ve always been around people, and I’m always trying to create and do a lot of things … but this is new, it’s a little different. I don’t feel lonely, but I definitely feel alone. I think there’s a big difference,” Hough told Oprah Magazine. “I feel alone … I miss people a lot, I want to hug them and talk to them, but I’m really enjoying this time where I can really connect to what’s really important in my life and look forward to when we get out of this,” Hough said, adding that she ponders the questions: “Who do I want to step into? Who do I want to arrive in this new world as?”

CB pointed out something I hadn’t seen: Julianne was spotted out in LA with the actor Ben Barnes. So… she hasn’t been in lockdown completely alone, huh? It sounds like Brooks and Julianne continue to examine whether they want to stay married and Brooks is coming down on the side of “I think I’ll be just fine if we split” and Julianne is having second thoughts? I don’t know. It’s not like I care that much at this point, and I’d be willing to bet that when all of this is over, Brooks is the one who files for divorce. We’ll see.

Social Distancing 101… took Koda to this playground today! Peep my stories for our entire journey, we went way off the grid… 🏔🐺