Jude Law, 47, is expecting his sixth child with wife of one year, Phillipa Coan 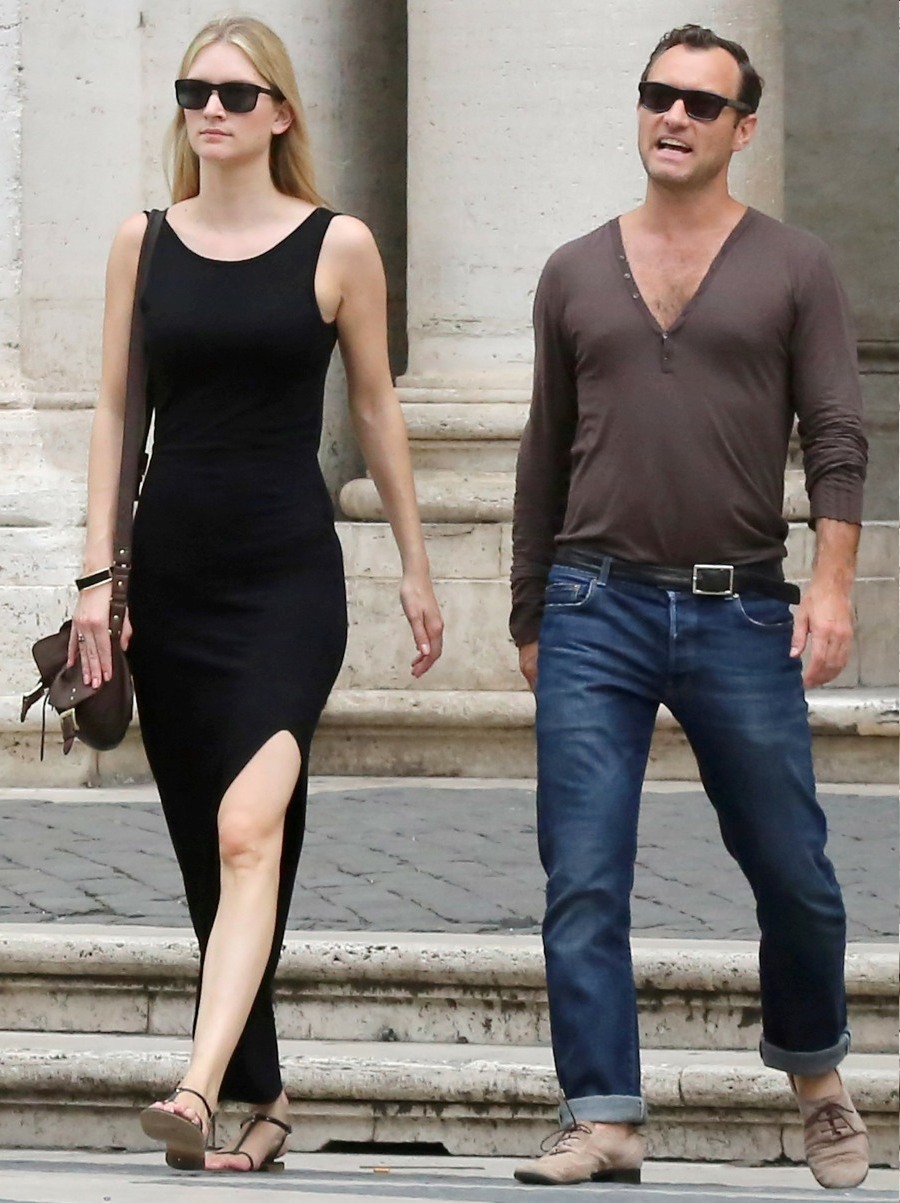 Jude Law and Phillipa Coan had a quiet wedding almost one year ago exactly. Jude had obviously been married before (Sadie Frost) and had been engaged before (Sienna Miller) and it’s actually been sort of nice to see him so settled down and comfortable with a seemingly quiet woman who works outside of the film industry – Coan is reportedly some kind of psychologist or therapist. Jude is 47, Phillipa is 32. Jude is also already the father of five children – three by Sadie Frost, one by Samantha Burke and one by Catherine Harding. His thing with Burke was just a fling, but I think he actually had a relationship with Harding, however brief. My point is that Jude has had a lot of child support payments for many years. So I was surprised this past February when he talked about his openness to having another kid with Phillipa. Turns out, they were probably already expecting:

Jude Law, 47, is expecting his first child with his wife Phillipa Coan, 32, MailOnline can exclusively reveal. The actor, who is already a father of five, was joined by his wife during a trip to the shops on Sunday, where the behavioural psychologist was showing a clear bump. Radiant Phillipa had a bump peeking from beneath her tight black top as she took a trip to the shops with her husband – just over a year after they got married.

Phillipa was dressed in navy loungewear and sunglasses as bearded Sherlock Holmes star Law carried the bags at an upmarket grocery store in north London.

The pregnancy comes months after Jude, who already has five children with three previous partners, revealed that he would ‘absolutely’ be open to having more. The Talented Mr Ripley actor said: ‘I love it, so absolutely why not? I’m very lucky to be involved with someone I’m madly in love with…The idea of having more children would be just wonderful. I’m fortunate to be with someone where I’m having more fun than I’ve ever had in my life.’

I’m including the bump pics below – she’s already pretty far along, well into her second trimester. I mean… congrats to them? I don’t have any kind of read on Phillipa, but I think she’s good for him. He’s seemed happier and just calmer since they got together, and he clearly loves having babies with all kinds of ladies.

Jude Law is thrilled as his new wife Phillipa, 32, is pregnant https://t.co/smcIrTIC8E

Incidentally, I saw this Save the Children “Save the Stories” video a few weeks ago, when the Duchess of Sussex read Duck! Rabbit! to baby Archie. Why is Jude SO HOT while reading a kid’s book? Is it the beard? Is it his voice? I don’t know, but I think I’m pregnant now too.

41 Responses to “Jude Law, 47, is expecting his sixth child with wife of one year, Phillipa Coan”