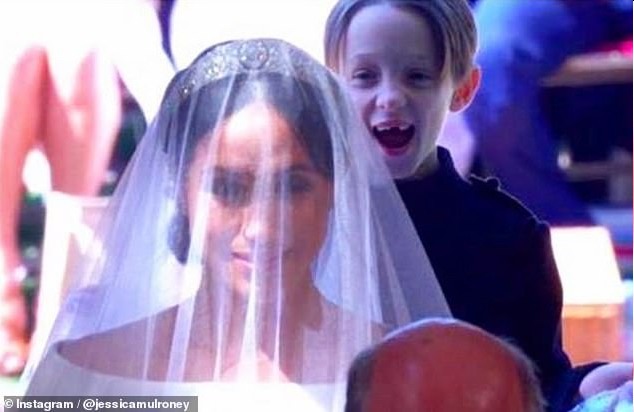 We haven’t talked about Jessica Mulroney in more than a month. The racist controversy happened in June, when Jessica lost her sh-t at Sasha Exeter, an Instagram influencer who was posting about racism and Black Lives Matter. Jessica took it personally, like Exeter was specifically calling her out, and Jessica threatened Sasha’s livelihood and sponsorships in writing. Exeter called Jessica out publicly and the drama lasted for a solid month. Jessica’s BFF the Duchess of Sussex was dragged into the Canadian drama even though Meghan didn’t do anything but mind her business in LA. The British tabloids had a field day but they could never get their stories straight – would it be worse for Meghan if she stayed friends with Jessica, or would it be worse if Meg dumped Jessica?

Well, I think this is our answer. Jessica posted this Instagram on Thursday. It’s from Meghan and Harry’s 2018 wedding, and you can see one of Jessica’s sons behind Meghan making a face. The IG is so multi-purpose! It shows that Jessica still feels comfortable enough using a photo of her FRIEND Meghan on her social media. It’s also a reminder that Jessica was part of the Sussex wedding, and so were Jessica’s kids. And it’s just a reminder that Jessica still associates everything about Meghan with positivity. Plus it’s just a cute photo.

So, there you go. Jessica and Meghan are still friends. Jessica also had a chance to “cool off” and that allowed the press around her to die down too. I feel like this is one of her first steps to her road to recovery. She’s reminding everyone that she’s BFFs with the Duchess.

Note: after everyone had a chance to see Jessica’s new Instagram for several hours, she made her ‘gram private Thursday afternoon. Just as well. Can’t be too obvious! She has to at least put some effort into the appearance that she’s NOT trying to use her friend’s image to rehabilitate her own.