Kourtney Kardashian posted a message that face masks cause cancer, got shut down


We’ve seen two of Kourtney Kardashian’s sisters throw huge maskless parties recently. People are being tested ahead of time, in Kim’s “don’t hate me for renting a private island” case it sounds they had blood tests or at least quarantined, but Kendall’s indoor party only used rapid tests. Those rapid covid tests are not reliable, most people don’t have access to them and Kim and Kendall setting a terrible example by assuming rapid covid testing can take the place of masks. That’s like using spermicide as your only contraception.

With a family like that, is it any surprise that Kourtney, who once took a “love potion” prescribed by her doctor and put her kids on a diary and gluten free diet after “muscle testing,” is spreading misinformation about masks? Kourtney posted the following on her Instagram stories, but it got removed before the 24 hours was up. [All credit to Kristian at Dlisted for this story, who did all the work. I would have looked for some of this stuff but it's all in the post already] 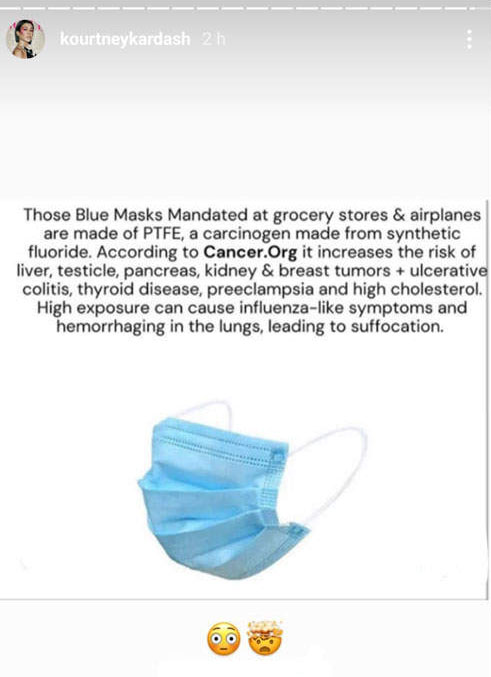 You know what else causes suffocation, flu like symptoms and lung problems? Covid! There’s actual scientific evidence of that, other than this ridiculous and false infographic that Kourtney reposted. I can’t believe she graduated from college.

Dlisted also notes that NHS doctor Dr. Joshua Wolrich called Kourtney out and asked people to report that post, rightfully. I had a good time on his Instagram, Dr. Wolrich is really taking the anti-mask people to task. Here’s his post to Kourtney, telling her that it’s unacceptable to promote this crap:

EDIT: It’s now, thank goodness, been taken down. ⠀⠀⠀⠀⠀⠀⠀⠀⠀ I refuse to beat around the bush about this. @kourtneykardash how DARE you mislead people and suggest that wear a mask causes cancer. As doctors we have been wearing fucking masks for decades, can you even hear how ridiculous you sound?! MASKS SAVE LIVES. By posting dangerous misinformation to your millions of followers you are now going to be directly responsible for people’s deaths. No ifs, ands, or buts about it. Fucking fuming. ⠀⠀⠀⠀⠀⠀⠀⠀⠀ To everyone else, please go and report her story by clicking on the three dots in the top right hand corner of it. This is not virtue signalling or some attempt at clout. This is serious.

What was Kourtney even thinking? Is she telling people not to wear the masks given out at stores and on airplanes and to bring their own, that they shouldn’t wear masks because “cancer” or is she not thinking it through at all? When is the last time she even went in a grocery store or on a commercial airplane? I would bet it’s been at least five years. She’s gone into a high end boutique at least. She’s so stupid and clueless that she’s spreading misinformation that can get people sick and die. Plus as Dr. Wolrich mentions she has over 100 MILLION followers. Unfortunately there are people with much more influence and power doing much worse.

Also as Kristian at Dlisted points out, there is exactly one post of Kourtney wearing a mask on Instagram that’s not an ad for some LED-treatment things she’s selling.

Is Kourtney an antimasker, is she just dim or both?

50 Responses to “Kourtney Kardashian posted a message that face masks cause cancer, got shut down”