Phil Collins’ ex, Orianne Cevey, is auctioning off his awards 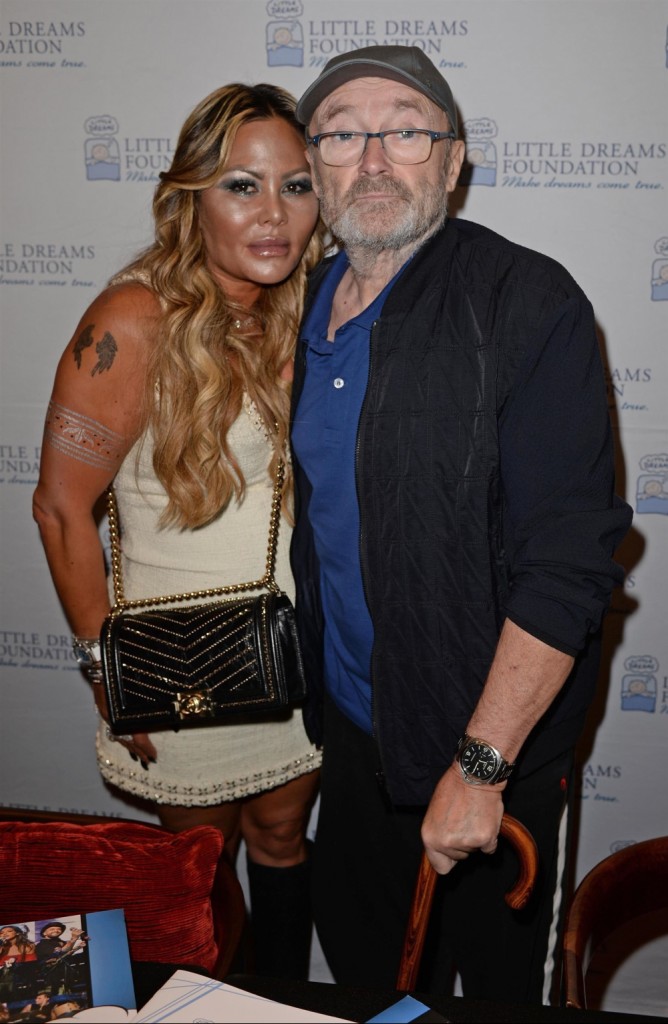 I’ll admit that I have found a certain amount of amusement in the Phil Collins/Orienne Cevey breakup drama. I’m not always one for karma, but Phil has a history of bad behavior when it comes to his exes, and he did take Orienne back, while she was still married to some else, even after she dragged him through the courts during their own divorce in 2006. So when Orienne got mad at Phil for objecting to her affair and retaliated by secretly getting married, stealing his house and refusing to give it back, yeah, I saw a few jokes to make. But this is one angle I really don’t find funny. Orienne and her husband, Thomas Bates, have finally moved out of Phil’s mansion and now they are auctioning a bunch of Phil’s music memorabilia.

Phil Collins’ ex-wife Orianne Cevey is selling off the singer’s gold records and awards for a song.

Cevey — who has been going through a long series of bitter legal proceedings with the pop icon over his multimillion-dollar Miami manse — is auctioning off a number of items that no longer “spark joy” — including Collins’ gold records for just $100.

Last year the 69-year-old “Sussudio” singer su-sued to evict Cevey and her current husband, Thomas Bates, from the property.

In October, Cevey agreed to leave the $40 million house by January 21 per a partial settlement. Now that Cevey has moved out, she’s put a number of items up for auction with Kodner Galleries.

A gold record of Robert Plant’s “The Principle of Moments,” which was presented to Collins because it was released by his label, Es Paranza, is currently going for a mere $100. A lot containing “Assorted Phil Collins Awards” is also at $100.

Phil has been worried about this since the beginning. He warned the courts during the eviction process that he had priceless items in that house that couldn’t be replaced if these grifters decided to make off with them in the middle of the night. When Orienne and Thomas showed up at the house after tying the knot, she and Phil got into a “confrontation.” Phil left so as not to give her any ammunition in court. He fully intended to pack up the house two weeks after he left. He never anticipated these two to become armed squatters. In addition to all his music trophies, Phil has millions of dollars’ worth of artifacts intended for his collection at The Alamo Museum. So far none of those items are on the auction block. I hope she didn’t get her hands on any of them.

Orienne is also auctioning off a bunch of her stuff. According to her rep, she’s moved to a smaller home (no word on whom she stole this house from) and wants to downsize her belongings, including some of the 5,000 pairs of shoes she owns. She is also getting rid of Chanel bags, a bunch of Rolexes, a vintage stamp collection and jewels. The rep said, “Orianne found organizing the move very cathartic and went very Marie Kondo and got rid of a number of items that no longer sparked joy for her.” Points for the passive aggressive swipe at her beleaguered ex but question: aren’t those gold records and awards their sons’ legacy too? All of this spite by unloading Phil’s lifetime of work is hurting more than Phil. According to the article, the Never Give Up Foundation that benefits kids with muscular dystrophy will receive 10% of the proceeds from the auction so at least someone benefits from this mess. And although I will be happy for the foundation, A) I’ll believe it when I see the actual deposit and B) It won’t buy Orienne back her soul.

As for the legalities of what’s happening, none of it sounds right to me but I’m sure if something is crossing a legal line, Phil has his team on it. I guess we’ll just wait to see how this all plays out.

14 Responses to “Phil Collins’ ex, Orianne Cevey, is auctioning off his awards”