Rege Jean-Page is coy about a guest appearance on Bridgerton 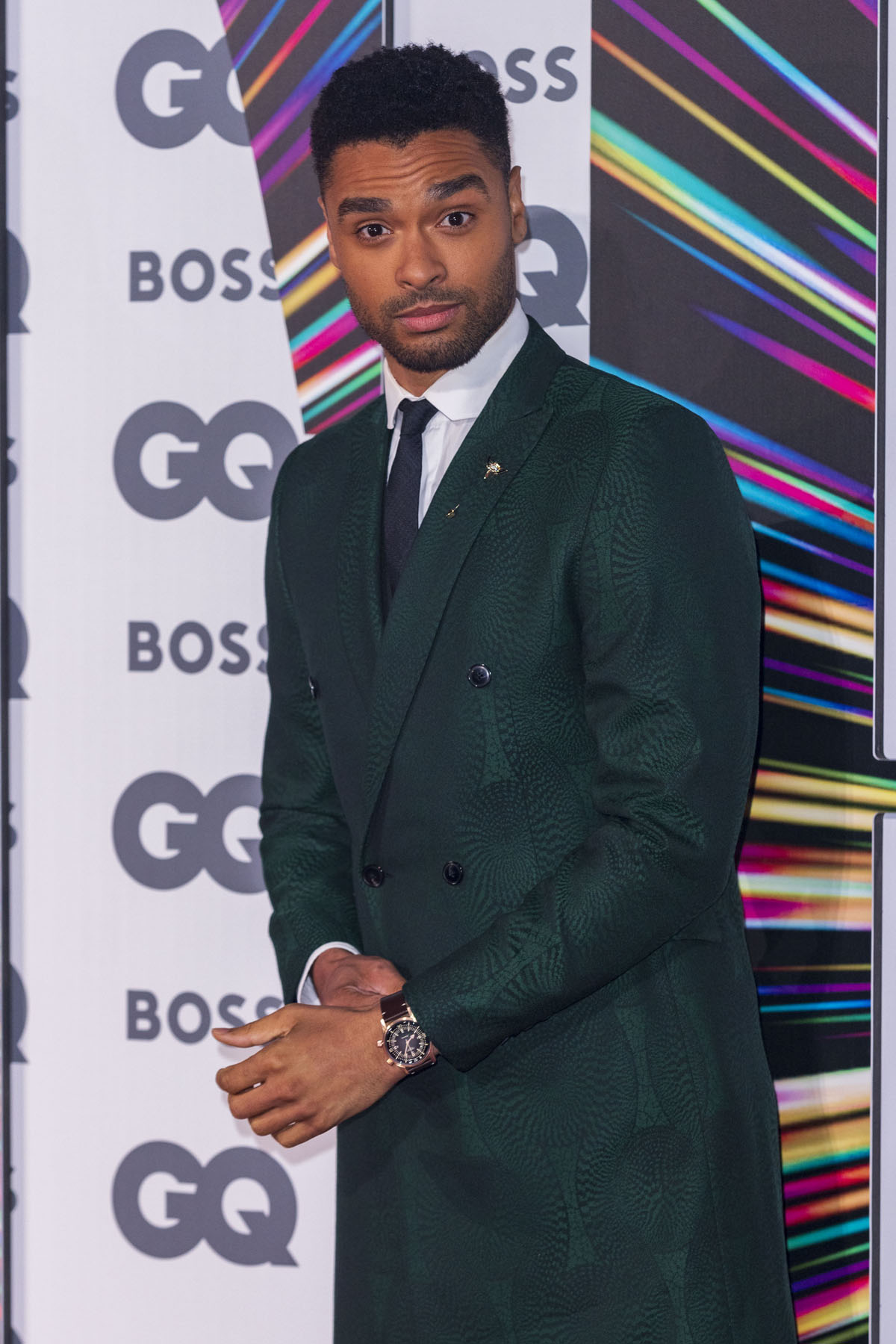 Earlier this year Shondaland caused a ruckus when they informed their rabid Bridgerton fans (basically me) that the Duke of Hastings, Rege Jean-Page, would not be returning for season two. Since the announcement, there were rumors that Rege was being a diva (he was not) and that he should be the next James Bond (he is not). After Rege made his big splash on the tiny screen over the holidays, he was courted by Hollywood bigwigs. Rege talked about that in this month’s GQ UK. He explained that he got his newest gigs because wives pulled their husband’s ears about his performance in Bridgerton. Rege also coyly omits that he may show up in a cameo in Bridgerton, although I think he will be too busy to do so. Below are a few more highlights from GQ UK:

On breaking the all white mold of period drama:
While some black actors, he says, may have not even asked their agents about those period roles, believing they wouldn’t be considered anyway, Page looks at it the other way around: “I’d be twice as hard on my agent to get on the case. Because I think that’s the only way you end up with Bridgerton. You don’t get there unless you’re knocking on the door.”

Hence the entrance on the horse mattered: “Being on a horse is literally lifting people into a position of aspiration, power, possibility and agency that they’ve not been afforded before. That’s what’s ridiculous. That we are not creative enough in the creative industries – that’s the failure. But the second you start doing that? It’s like, ‘This is so easy!’ Yes, it is, so keep doing that.”

He tells me a story, which his publicist later sends a link regarding, to ensure I’ve got it, about when Paris was recaptured during the Second World War. The French, he points out, were fighting with mostly black soldiers. But they didn’t want that imagery in the history books so shipped in white soldiers for the victory march. His point is this: when people complain about political correctness when they see a black actor in, say, Dunkirk, they have it the wrong way around: “The reason you think history is white is because you’ve been lied to. It’s not that we’re being politically correct. It’s that we’ve been, very deliberately, politically incorrect.”

On watching the intimate scenes in Bridgerton with his parents:
Predictably, the thing he got asked about in every junket interview was, “How did you watch it with your parents?” The response he never exactly gave but gives now to me is, “Mate, how do you think we got here? Everyone’s done it.”

The intimate scenes, he says, were not dissimilar to stunts in terms of how they shot them: “‘Like, if I move here, in what way? Does that shift our weight? What’s dangerous about here? Is it OK if we move in this direction?’”

They had a three-layer system: “So there’s a yoga mat, a little yoga ball and whatever else between you and the other person.”

His next two projects and power dynamics:
The two projects he did sign up for aren’t bad at all: first up is The Gray Man from the Russo brothers, the directing duo behind Avengers: Infinity War and Endgame, which will be Netflix’s most expensive film to date and which costars the aforementioned Ryan Gosling, Chris Pine and Chris Evans. After that, an adaption of Dungeons & Dragons, “which I’m very much still in the trenches with” and which, well, it’s Dungeons & Dragons: people are going to watch.

For both, he says, the meetings went roughly the same way: “The conversation was, ‘So my wife saw this [Bridgerton] and told me that I need to see it.’” There is, he thinks, “something super interesting [in] that powerful men had me recommended by the women in their lives, which I think says something about where the power actually lies”.

Did they… kick you out? He laughs. “No, I respectfully exited. I didn’t want to put them in an awkward situation where they had to kick me out.”

But Page doesn’t quite rule out a cameo or a guest appearance when I mention the possibility to him.

At first he is adamant: “You know I couldn’t tell you!” But after some light prodding he allows the following, a statement that could be as much about himself as about any possible return. He says, “Isn’t there something wonderful about being surprised by what you weren’t suspecting?”

Rege impresses me continually. Every time I read one of his interviews, I feel like he is mature beyond his years. I am excited that he is getting all of these accolades and opportunities as he has definitely been working hard these past few years. I found it interesting that Rege credits his childhood as an outsider for his love of acting and ability to slide in and out of characters. I also like how Rege points out the power that wives of producers and directors have. Rege sounds like a feminist and I love a male feminist. It would be nice to have a Rege cameo in future seasons of Bridgerton, however, I am happy if Rege moves on with his life. Rege has bigger and better things to do and I am here for it. I am looking forward to season two of Bridgerton without Rege. I am equally looking forward to all of Rege’s upcoming projects, especially The Gray Man. Having all of that hotness in one movie will most likely crash the internet but I don’t care. I love how the writer states that Rege is a fast talking sort of guy and that is exactly how I picture him. He seems fun loving and like he’s enjoying every minute that he has in the limelight.