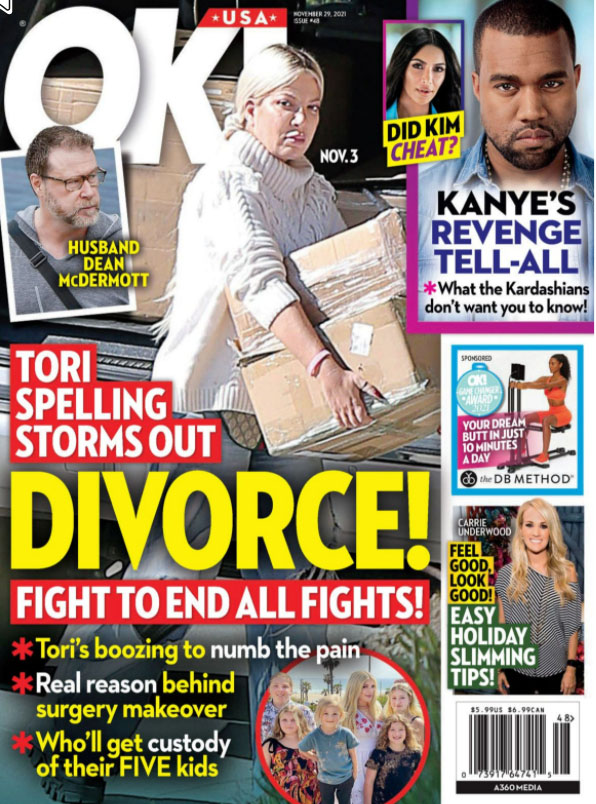 And the award for the most broadcasted divorce goes to… Tori Spelling and Dean McDermott! According to OK! Magazine, though, this time it’s truly dunzo. This week’s issue shows Tori hauling several boxes from their shared home to a private residence, believed to be her Divorcée Pad, signaling the final death throes of her 15-year marriage to Dean. What was the final straw? Depends on who you ask. Tori says it’s Dean’s affair from eight years ago that suddenly came rushing back to her. Dean says it’s because Tori is insecure and paranoid, and he can’t deal with it anymore. Candy Spelling didn’t say, but probably assumes, it’s because she’s willing to finance the whole thing.

It’s Dean fault because of his 2013 affair: “Tori’s never felt the same about Dean since he confessed to the affair,” says the insider. “She tried to make it work, but when he left to go on location again, it all came rushing back.” The insider adds that something changed for Tori while Dean was away. “Suddenly, she couldn’t bear the thought of him sharing a bed. At this point, they hate each other and can’t stand to be around one another.”

Tori was only staying for the kids: “That’s the only reason they’ve lasted this long,” says the insider, adding that the 90210 alum “has been miserable for ages, but didn’t have the fortitude to leave. But during this time apart, she realized she’s a lot stronger than she gives herself credit for,” says the insider. “She learned to make decisions for herself and to love herself again.”

Guess who’s paying for it: There are whispers that Tori’s been getting financial help from her mom, Candy, 76. (In 2016, it was revealed Tori and Dean owed nearly $39,000 in unpaid credit card bills.) “She’s paying the kids’ school tuition and clothing and most of the household bills. “She wanted Tori to find her own way, but after seeing how miserable she is with Dean, she caved and gave her money for a new home and furniture.”

It’s Tori’s Fault because she’s never happy: “Dean insists he’s not the bad guy that Tori’s made him out to be,” dishes the insider. “He says Tori is extremely paranoid and insecure and that nothing he ever did or said made her happy. He feels she gave up on him and their marriage.” The insider notes he also wants equal access to the kids. “Dean won’t let Tori take the children away from him. He’ll go to court for joint custody if it comes to that. They’re still his kids too.”

The kids come first: “They already have a good co-parenting system in place when one has to work, or one wants to do something socially,” says the insider. “No matter what, their kids will come first and will always be their No. 1 priority.”

Tori’s Khloe Kardashian makeover is to stick it to Dean: According to a source, the real reason Tori spent a reported six figures on a head-to-toe makeover is to show Dean what he’ll be missing. (An insider previously told OK! it included mini neck and eye lifts, a face-lift, lip filler, Botox and facial fillers, as well as a new team of stylists and personal trainers.) “Tori definitely enjoys proving she’s still got it,”

I mean, they were soulmates just two years ago, peeing with the door open. So the almost decade old affair and fact that Tori’s never happy just coming to light is a little hard to take. I think it’s something closer to the fact that Tori started preferring Dean out of town and needed a reason to look like the victim. Maybe she was banking on him having another affair and when she didn’t have any evidence, she just used the one she already had again. And Dean knows he’s screwed because Tori will always be TV royalty while he’s a two-time cheater, so he needs to smear Tori on his way down. One thing that is blatantly not true is those poor kids come first. I believe Tori and Dean worked out a co-parenting arrangement but no one is taking the children’s emotional well-being into account. Letting this mess be played out in the press like this is not in their best interest.

What I do believe is that Candy opened her pocketbook. I don’t know what actually made her cave, but that is how this is coming about. I also believe Tori’s new look is a divorce makeover, designed to make Dean eat his words. The fact that she splurged on it and then got Candy to bail her out of her marriage is uncool, but that’s Candy’s fight. However, that ‘insider’ certainly dispels those “it’s just contouring” claims, don’t they? 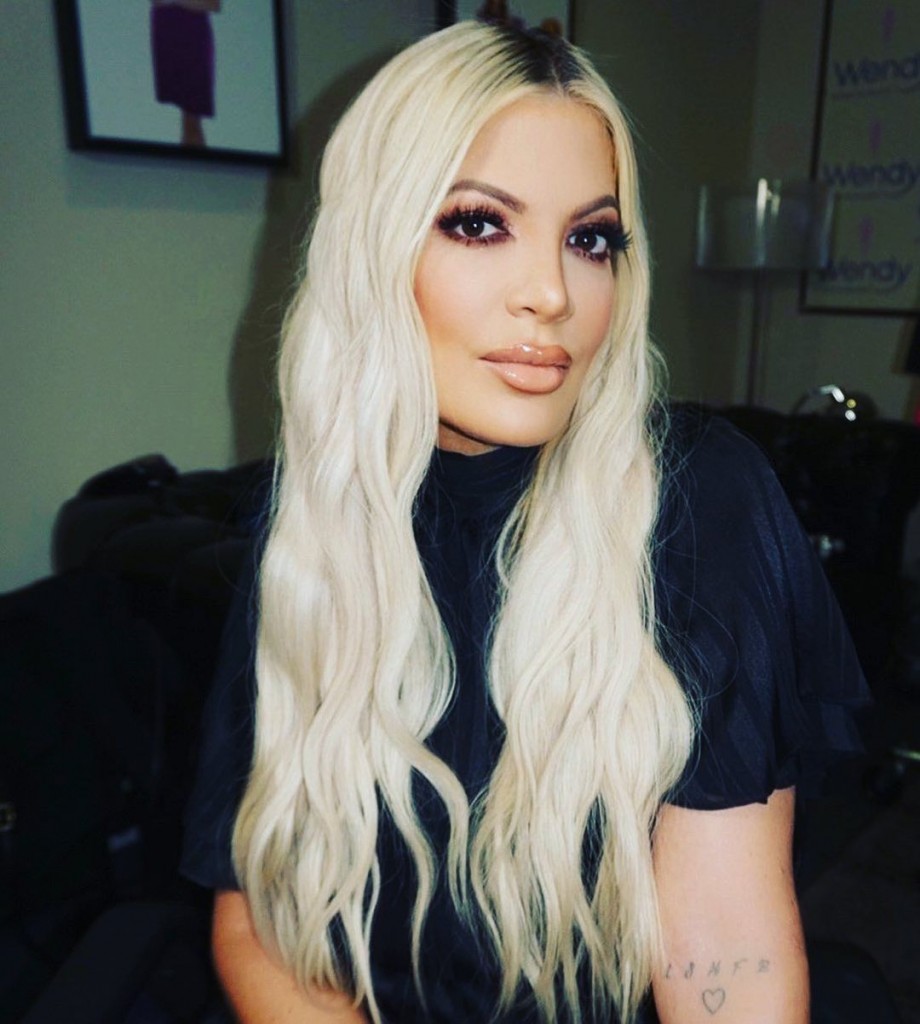 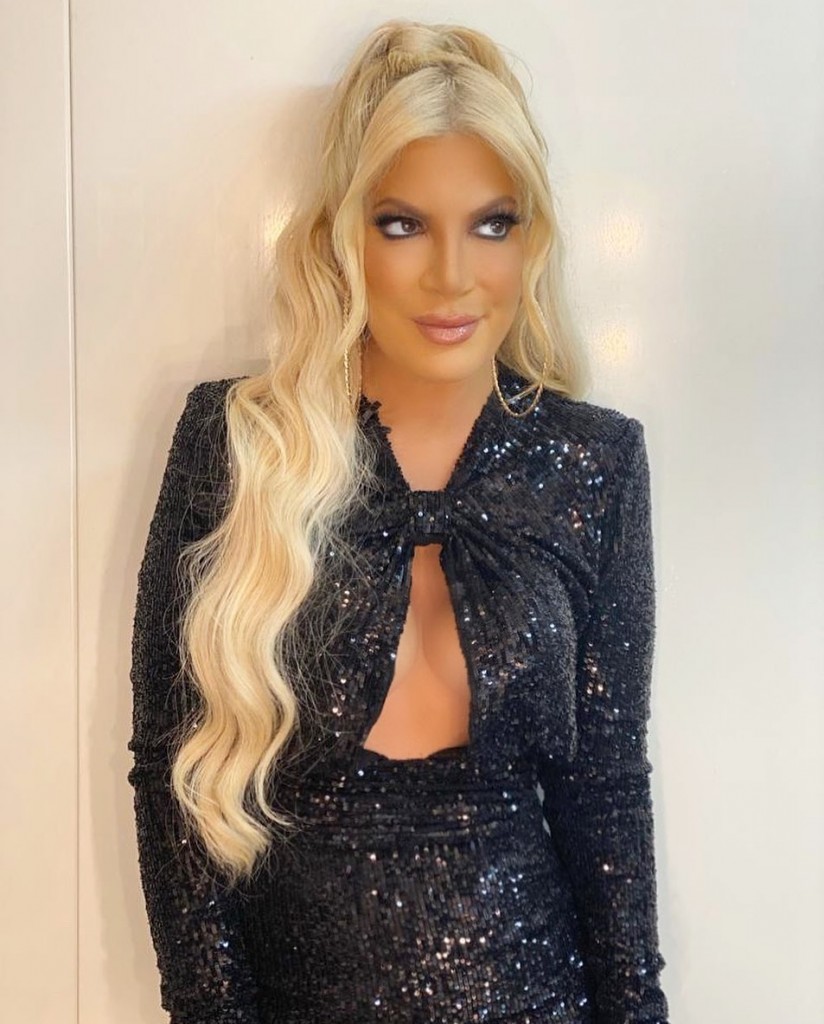