Liverpool manager: The fans had their reasons for booing Prince William

The Daily Mail and other British media outlets keep talking about Prince William getting booed at the FA Cup final. It’s amazing. It went from “wow, William really got booed like crazy” to “how dare a public figure be publicly jeered at a sacred and orderly football match, where is the decency??” in a matter of about six hours. I can’t even tell if some outlets are being tongue-in-cheek. Suddenly, the Mail is full of woke warriors who want to cancel Liverpool fans’ freedom of speech. It’s a stunning turn of events. What makes it even funnier is that Liverpool’s MPs (all Labour) haven’t condemned the fans’ behavior. Neither did Liverpool’s manager.

Downing Street has today slapped down Liverpool manager Jurgen Klopp’s defence of fans who jeered the National Anthem and Prince William at the FA Cup final. Reds fans sparked fury after boos echoed around Wembley Stadium while Prince William – the President of the FA – was introduced to Chelsea and Liverpool players ahead of their cup final clash on Saturday. Supporters also drowned out singer-songwriter RAYE’s rendition of ‘God Save The Queen’, as well as the hymn ‘Abide With Me’ – a much-loved FA cup final tradition.

The jeers were condemned by some, including Commons speaker Sir Lindsay Hoyle, who described the booing as ‘totally shameful’. Lib Dem leader Ed Davey, added to the condemnation, saying those involved ‘do not represent their clubs or our country’.

But when asked about the incident Reds boss Klopp appeared to justify the actions of Liverpool fans, describing them as ‘wonderful’ and suggesting there may be historical ‘reasons’ for their jeers.

‘They wouldn’t do if there was no reason,’ he told reporters at a pre-match press conference on Monday.

But minutes after his comments – made ahead of Liverpool’s Premier League clash with Southampton tomorrow night – Downing Street appeared to slap down Klopp’s defence. Asked in a briefing if Klopp was right to say Liverpool had a reason to boo the national anthem, the Prime Minister’s official spokesperson replied ‘No’. The spokesperson added that the booing was a ‘great shame’ given the FA Cup was meant to ‘bring people together’.

The FA Cup did bring people together. They were all together in the stands, cheerfully booing Prince William and screaming “f–k the Tories.” They were all brought together by their love of Liverpool and their hatred of the Conservative Party and Tory stooge Baldemort. The way the Mail frames this is insane as well – Jurgen Klopp didn’t condemn Liverpool fans, he sympathized with them and said they had their reasons. And the Mail turns that into “the Prime Minister slapped down the Liverpool manager!!” 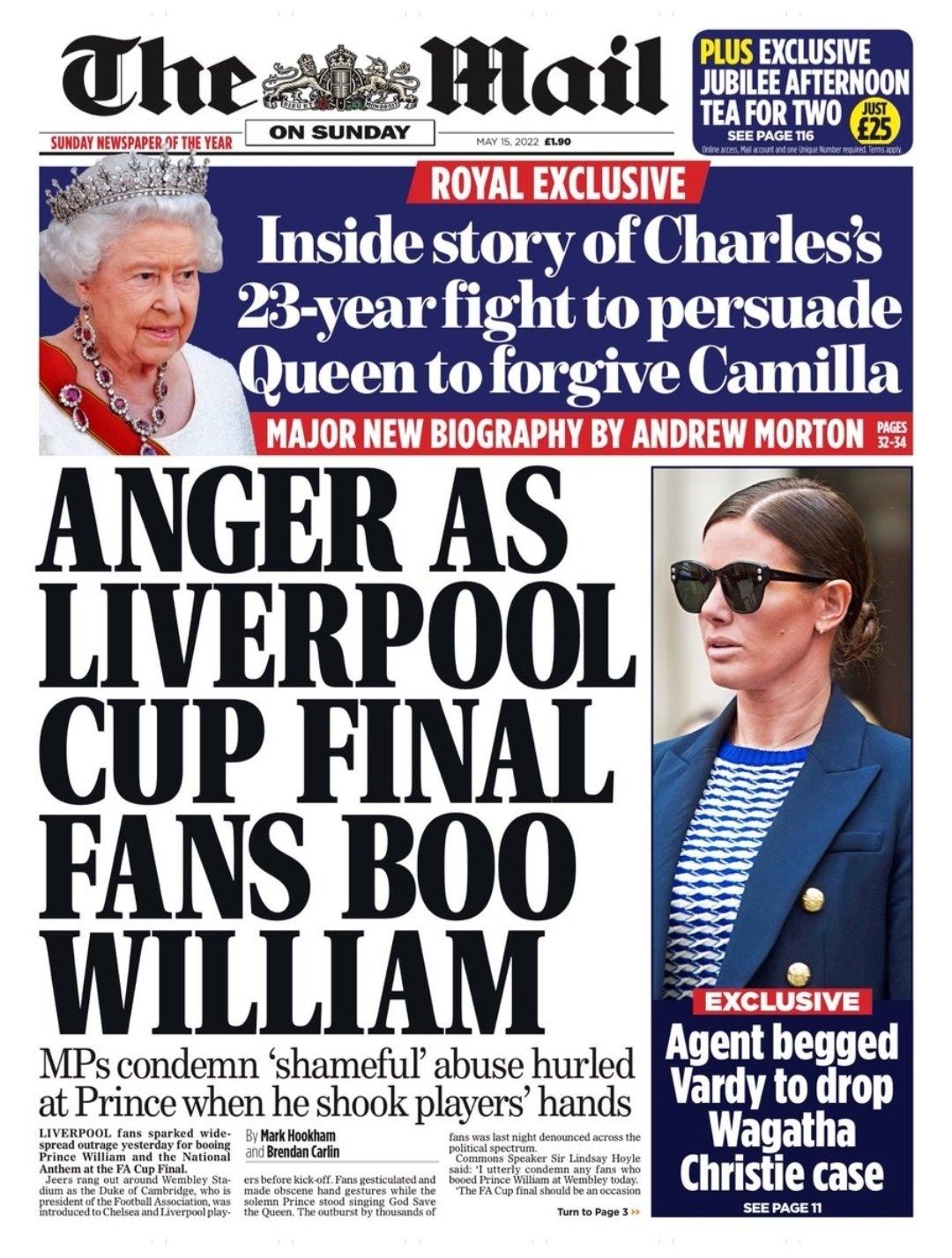 80 Responses to “Liverpool manager: The fans had their reasons for booing Prince William”